Calorease is your edge to make dieting more effective. It binds with the fat in food to reduce up to 500 calories a day.

Calorease is a brand new diet pill that recently hit the market proposing a concept that is relatively different from what we see from other weight loss supplements out there. It is a product made of a fiber that binds to fat once inside the stomach. The manufacturer of this tablet believes that it can help users avoid ingesting fat.

Fat is certainly seen as the enemy by obese people. This fact does not change the reality that many individuals still enjoy food rich in fat. The company behind Calorease believes it can save the day with its new tablet by preventing the extra fat from getting absorbed.

It is always interesting to come across new weight loss products offering solutions slightly different from the norm. But the big question is, can it really deliver? In this article, we propose to give you a full review of Calorease so that you can make a final decision in case you were considering trying it. 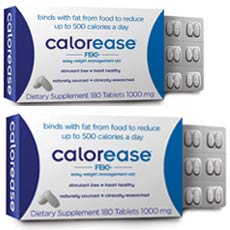 Which Company is Behind Calorease?

That brand Calorease was launched in 2013 by the company Soho Flordis International who bought the patent for FBCx (the key ingredient) in 2012. Originally FBCx was a product sold by Alpha Fibe back in 2007 but it eventually faded out of the market.

Soho Flordis International was established in 2010 through the merging of the company SOHO Group and Flordis Pty Ltd. The Australian company’s vision is to build a brand recognized worldwide for the quality of its naturally formulated products. SOHO Flordis International’s dream is to become the leading provider of natural medicines by 2020.

One of the products the company believes could help achieve that goal is obviously Calorease. The target is to be able to prove to fat people that they could lose weight by simply preventing dietary fat from getting ingested. We are yet to found out if the product really works.

Calorease Ingredients – Are they Safe & Effective?

Each capsule of Calorease contains 1000 mg of FBCx. FBCx stands for Fat Binding Complex. It is a soluble dietary fiber made of a polysaccharide is known as Alpha cyclodextrin. This ingredient derived from grain was mainly used as an emulsifier but later it was discovered that its fat binding qualities could also be used to prevent dietary fat from getting ingested into the body.

According to the manufacturer, once inside your stomach the FBCx inside Calorease will coat fatty droplets coming from the food and prevent them from getting broken down by the enzyme lipase. Those fatty droplets will eventually end up in your feces instead of being absorbed by your body.

Fat binders are not new in the market but FBCx is believed to stand out due to the fact that it can bind to 9 times more fat than other similar compounds.

It is claimed that with this product, users can hope to cut down their food energy intake by 500 calories every day and this could result in losing up to 6 pounds a month.

Are There Possible Side Effects Resulting From The Use of Calorease?

According to the manufacturer, if you use the supplement following the recommended dosage, you should not experience any side effects. It is possible though that one can experience flatulence or intestinal upset while using it.

Certain customers did complain about being bloated while using this dietary pill. Whatever the case, the FBCx is generally regarded as safe by the FDA so most people should be fine using it.

It is a recognized fact that FBCx can bind to fat but when it comes to losing weight, you might need more than just a fat binder. Keep in mind that the dietary pill only blocks fat, not carbohydrates or proteins. So the user can still potentially put on weight if he does not follow a certain diet.

Calorease may work only for those whose food is rich in fat and poor in carbohydrates and proteins.

Q: How should I take Calorease?

A: Users are advised to take 2 tablets before each meal. So for a day that makes it 6 tablets.

Q: Are There Any Guarantees?

A: Soho Flordis International does have a return policy stating that all products must be returned before the 30th day after purchase. Keeping mind that getting a refund does not include shipping and processing charges.

Q: Is Calorease a Scam or Not?

A: Calorease is not a scam. It is a genuine product offered by a real company that is probably going to be around for the next 15 years.

Q: How much does it cost?

Q: Where can I purchase Calorease?

A: Calorease can be purchased via the official website.

What Kind of Reviews are Out there for Calorease?

The idea of losing weight by preventing your body from absorbing fat is interesting but you will need more than just getting rid of 500 calories of fat to see real results. Observing healthy diet habit probably turns out to be a much better choice than just taking this tablet.
Calorease might be useful if you intend to spend a weekend eating all kinds of fatty foods but that aside, it has no real use. 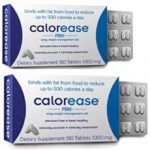