SmartBurn is a hoodia based weight loss supplement advertised to help women lose 450% more weight compared to other leading brands. Immediately you read this, you are going to ask yourself “What exactly did they put in the capsule?”

We asked ourselves the same question. Also we thought it would be a good idea to try to find out why the manufacturer says it was formulated only for women and not for men.

The manufacturer of this product went ahead to tag the supplement as the “the total body rapid weight loss solution”. It is said to help you control your appetite, promote relaxation and support your mental well-being.

In this article we are going to find out if all those claims are true.

Manufacturer Details and Claims about SmartBurn

The early formulation of Hydroxycut™ contained ephedra and other substances considered to be dangerous. After several consumer complaints and reports of death cases, the FDA had to step in and come up with stricter laws that would regulate the supplement industry. Iovate has now released a new version of Hydroxycut deemed to be safe.

The reality is the Hydroxycut issue has tarnished the image of Iovate and even though the company is back on track, we would still recommended you think again when considering buying its products.

The main ingredient in SmartBurn is Hoodia Gordonii extract. On top of that there are 15 other ingredients- playing different functions. Let’s look at a few of them.

SmartBurn is made of a set of ingredients that act like appetite suppressants while another set act like metabolism boosters. By eating less and remaining active, it is believe that the body finds itself in a situation where it has to rely on its fat reserve to keep up with the increase in metabolism. This is what is supposed to result in a loss in weight.

What Does SmartBurn Claim to do?

The boldest claim made for SmartBurn is that it can help you burn fat 450% faster than other known weight loss brands.

SmartBurn Cost, Dosage and Directions to Use

A bottle of 100 tablets is going to cost you $49.99. The suggested daily dosage is to take 2 tablets at a time, 3 times a day. Each serving should be taken 30 minutes before a meal and should be followed with at least 8 oz of water. Do not take more than 6 pills within 24 hours.

There are no reports of any side effects resulting from the use of SmartBurn. That said, one of the ingredients used in the formulation is green tea which is known to contain some amount of caffeine. Sensitive people should watch out as the use of caffeine may result in side effects like insomnia, headaches, palpitations and nervousness.

Even though recommended to women, SmartBurn should not be used by a pregnant person or one that is still breastfeeding a child. The supplement is made for adults above the age of 18.

The company behind SmartBurn is a recognized establishment not known to take advantage of its customers. For that matter, there is no need to think that SmartBurn is a scam.

SmartBurn is no more available. Probably its market performance was not that good and the manufacturer decided to just discontinue it and come up with something else. 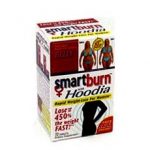