Which Non-Steroidal anti-inflammatory Drug (NSAIDs) is the best?

What Are Non-steroidal Anti-inflammatory Drugs (Nsaids)?

Non-steroidal anti-inflammatory drugs are drugs that are used to reduce inflammation without the harmful side effects of steroid drugs. They work by acting on prostaglandins produced in our body and reducing their production. These prostaglandins are the chemical agents in our body responsible for pain, fever and inflammation. They also have other functions like protecting the lining of the stomach from the effects of the acid secreted in the organ. They also have a role in causing platelet aggregation and clot formation.

For what conditions are NSAIDs used?

Because NSAIDs have useful effects against fever, pain and inflammation so useful in conditions like:

What are the types of NSAIDs?

NSAIDs can be both selective and non-selective. Non-selective NSAIDs like aspirin block both the variants of the enzymes hence stops pain, fever and inflammation but can damage the stomach lining causing ulcers and blood-thinning side effects.

Selective NSAIDs like celecoxib can work without these harmful side effects. But it has documented to produce some cardiovascular side effects so should be taken with caution.

Pain fever and inflammation are caused by chemical signals called prostaglandins in our body. Whenever we have a sprain or suffer from an injury, these prostaglandins lead to the red, swollen painful joint that we observe. Similarly, chronic pain conditions like arthritis joint pain are also due to prostaglandin production in the joint because of a prolonged process of wear and tear.

Cycloxygenase is the enzyme responsible for prostaglandin production and it is of two forms: COX-1 and COX-2. Although both enzymes are responsible for pain, fever and inflammation, only COX-1 performs the protective function in the stomach lining and has a role in platelet aggregation. By blocking these COX enzymes, NSAIDs can stop the processes of pain fever and inflammation occurring in that area.

NSAIDs can also have an effect on your blood pressure. They reduce the blood flow to your kidney leading to fluid retention in the body and causing hypertension. It can eventually lead to kidney failure by depriving the organ of its blood supply.

Which NSAIDs are approved in the United States?

Here is a list of the NSAID drugs which have been approved in the United States:

Do All NSAIDs Work the Same Way? 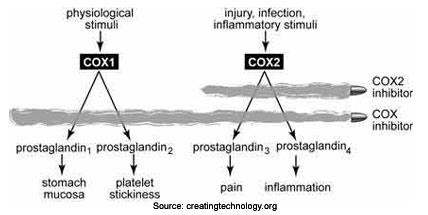 NSAIDs differ in their potency and duration of action. They also have differences in their relative inhibition of COX-1 and COX-2.

For a prolonged use, aspirin is the only NSAID that is approved for use. It can be used for a prolonged period of time for four to seven days to prevent clot formation in heart and stroke patients.

Similarly, ketorolac is a strong NSAID which should not be used more than five days because it causes ulcers.
Celecoxib is another selective COX-2 inhibitor. They are similar in terms of their pain and inflammation reducing properties but it will not cause the harmful side effects of blood thinning, bleeding tendencies and ulcers.

What Are the Common Side Effects of NSAIDs?

Here are a few common side effects of taking NSAID drugs:

Benefits of NSAIDs still outweigh the risks and most users are benefiting greatly from the use of these over the counter painkillers for their painful joints or headaches. In fact, NSAIDs are considered indispensable for pain management. The choice of NSAID is usually based on personal experience rather than evidence.

According to the American College of Gastroenterology estimates that 14 million arthritis patients use NSAIDS continuously. 80% NSAID users complained of gastrointestinal side effects like stomach pain and ulcers. However, adding a proton pump inhibitor can help with these problems. Those most at risk for NSAID induced ulcers are the elderly, smokers, alcoholics, people who use multiple NSAIDs.

The efficiency of the use of multiple NSAIDs has not been established as well. The patient’s ability to heal from ulcers or internal bleeding depends on age and other relevant factors. 1-2% people on NSAIDs do develop a frightening ulcer complication, however, according to the American College of Gastroenterology, around 10 percent continuous NSAIDS users quit their medication because of troublesome gastrointestinal side effects.

You can also choose joint pain supplements which are very trending nowadays and come at a very fair price. You might consider Omega XL, which is the most reviewed pain supplement today. It is designed specially to target the root cause of joint pain to eliminate it altogether.