What can be done to Relieve Round Ligament Pain? 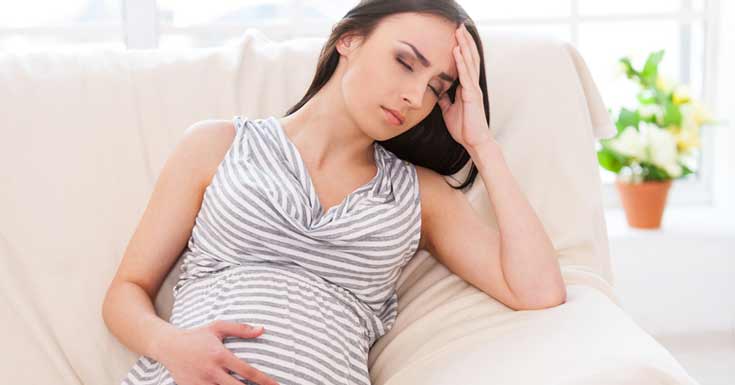 What are Round Ligaments?

What is the Pregnancy Condition Called Round Ligament Pain?

The stretching and thickening of the round ligaments may cause pain, which can be felt in one side or both sides of the pregnant woman’s belly; although, in nearly all cases, it is usually noticeable in the right side. This is because the uterus has a normal tendency to turn to the right. This pregnancy condition can be felt as early as 14 weeks during the pregnancy but is usually experienced by mothers during the second trimester.

Round ligament pain is characterized by short jabbing sensation or sharp stabbing pain felt when a pregnant woman suddenly changes position. This is usually felt when a pregnant woman gets out of a bed or evacuate a seat or a chair when coughing, when rolling over the bed, or when standing up and leaving the bathtub. It can also be felt like a dull ache following an active day, such as when walking a lot or doing some physical activities. Other movements that can cause round ligament pain are laughing or coughing which result in the contraction of ligaments quickly.

You may also like: How to Get Rid of Pelvic Girdle Pain During Pregnancy?

Round ligament pain begins at the groin area and moves upward and outward on either side to the top of the pregnant woman’s hips. The pain is felt internally and lasts for only a few seconds. However, it can be traced on one’s skin and it follows the bikini line that matches a high-cut bikini or bathing suit. 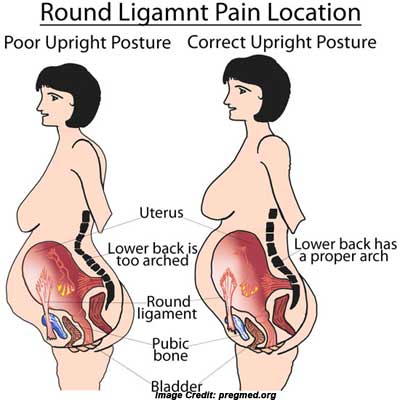 What can be done to Relieve Round Ligament Pain?

Once a healthcare provider reassures that the pain felt originates from round ligaments, a pregnant woman should apply the following measures to relieve round ligament pain:

When is it Necessary to Call a Healthcare Provider?

The condition, round ligament pain, is a common discomfort felt during pregnancy. However, the pain felt should not last longer than a few seconds. In cases that they last longer, it is important to immediately report the pain to a healthcare provider. Furthermore, reporting may also be necessary when persistent pain is still experienced even after resting or employing relief measures. More so, if the pain is accompanied by:

Are there any other Causes of Pain?

This is because abdominal pain can also be a sign of several obstetrical problems, such as preterm labor, placental abruption, severe preeclampsia, or a medical problem not related to pregnancy, like appendicitis or urine infection. If a pregnant woman is uncertain of the nature of the pain, it is best to see a healthcare provider to undergo some tests. A negative result may rule out serious medical or obstetrical problems.