Rhino 8 Review – Should you Buy it?

Rhino 8 is presented as a male supplement intended to give you a great erection with no side effects. It is intended to be taken before you have sex and is not intended as a long-term regular supplement.

We could not locate the manufacturer’s website, but the product is widely available with online retailers, one of which gives increasing discounts when you purchase in bulk: If you only buy one capsule of the product, you need to pay $5.99.

How Does Rhino 8 Rate? 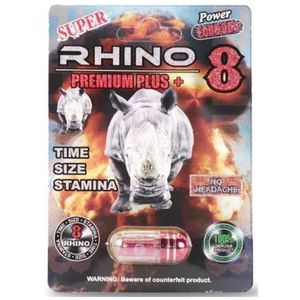 How Does Rhino 8 Work?

Rhino 8 contains a proprietary blend of natural herbal ingredients which are intended to support natural male sexual health, which could support erections and sexual performance.

It is meant to be taken by mouth with some water thirty minutes or so before you have sex.

Rhino 8 Ingredients – Are they Safe & Effective?

The ingredients used in Rhino 8 are as follows:

It is an ingredient promoted for sexual enhancement. It features aphrodisiac properties.

This is the remedy behind your impotence, erectile dysfunction, low libido or fatigue. Hence it significantly improves sexual function.

It fights against harmful radicals in the body.

It is shown to enhance satisfaction and sexual function.

Is responsible for sexual desire and it activates the processes of the reproductive system.
As per Pharmacognosy Review, Ophiocordyceps Sinensis was used in a studuy for sexual dysfunction. the study concluded that O. sinensis supplementation increased sperm number and also serum testosterone.

It increases fertility in men.

Boosts sexual drive and libido and improves blood flow to penile chambers.
As per Spermatogenesis, Panax ginseng is used to enhance sexual performance in traditional Chinese medical practices. Also, the beneficial effects have been evaluated scientifically and have also been confirmed in meta-analysis of clinical trials.

The compounds found in this proprietary blend are not given.

Other ingredients include; Cornus, and Condonopsis, No listing of the relative amounts of these ingredients is provided, and the “proprietary formula” is unexplained. In addition, no clinical research is provided to support their assertions about its ability to support male sexual health.

Q: How Should You Take Rhino 8?

A – Take one capsule thirty minutes before sexual intercourse with some water. For best results, take it an hour apart from any other supplements or medication.

A – They have Returns service within seven days after the product delivered.

Rhino 8 is a sexual stamina pill that is claimed to boost sexual function among men.

It might increase the user’s libido and help fight sexual disorders. 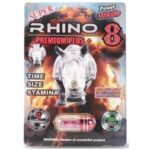 SHOP ON AMAZON SHOP ON WALMART