How Yoga and Meditation Can Contribute to Making You Pleased?

Those who practice yoga regularly often speak about how yoga not only feels good on the body but also creates a more positive state of mind. Many yoga practitioners even describe a “yoga high” or a feeling of “yoga bliss” after class.

These personal feelings of happiness and wellbeing are now being backed by researchers studying the effects that yoga and meditation can have on emotions, and the biochemistry behind these modalities.

During various forms of exercise, yoga and meditation endorphins are released within the body from the pituitary gland in the brain. This blissful or zen-like happy state can be highly pleasurable and explains why so many yogis continue to practice yoga and meditation.

In recent years, the scientific studies of yoga have increased substantially and many clinical trials have been designed to assess its therapeutic effects and benefits.

Institutions such as Harvard, MIT and Yale Universities have encouraged research on the various modalities of yoga and meditation for mental health benefits.

The National Institutes of Health (NIH) has even allocated a budget for this research as part of the National Center for Complementary and Alternative Medicine (NCCAM).

In looking at how yoga can scientifically increase overall levels of happiness, we must look at specific hormonal and chemical reactions in the body and brain.

Many scientific studies have shown how brain chemicals play a key role in regulating behavior and anxiety. Yoga and meditation can boost levels of the feel-good brain chemicals such as GABA, serotonin and dopamine, which are responsible for feelings of relaxation, contentedness, and the way the brain processes rewards and enjoyment.

A deficiency in serotonin, a powerful neurotransmitter that controls our moods, is associated with depression. Regular practices of yoga and meditation techniques have been shown to increase levels of serotonin in the brain and naturally release this important chemical, leading to greater levels of happiness. 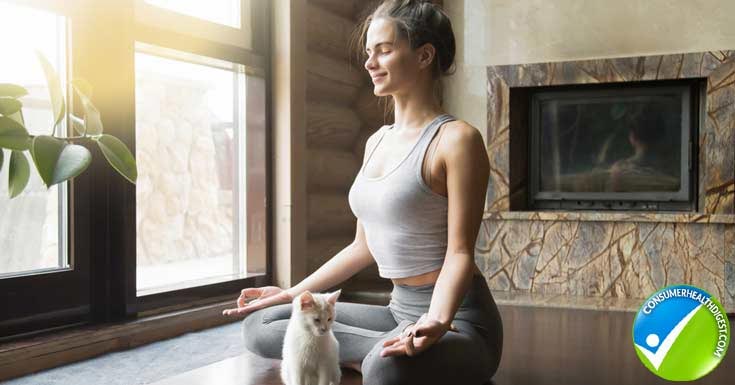 The neurotransmitter dopamine is in charge of our pleasure-reward system. A balanced level of dopamine allows us to experience joy, bliss and even euphoria. Yet too little dopamine can lead to feeling unfocused, unmotivated, lethargic and even depressed.

A study published in “Cognitive Brain Research” outlines how practicing yoga and yoga nidra meditation specifically, can increase the release of dopamine in the brain.

Another key ingredient to brain health and the regulation of the nervous system is the amino acid GABA (gamma-aminobutyric acid). Scientists have learned that GABA levels can determine how relaxed one may feel. Patients who have been diagnosed with depression and anxiety disorders typically test very low for this amino acid.

As reported in the Journal of Alternative and Complementary Medicine in 2010, researcher Chris Streeter conducted a 12-week study where healthy participants walked or practiced yoga for the same length of time each week. Half of the subjects within the yoga group reported lower levels of anxiety, had higher GABA levels and experienced increased levels of happiness than those in the walking group.

When we feel any emotion at all, whether that is happiness, anger or sadness, we experience hormonal reactions which create physical reactions such as smiling when we feel happy or crying when we have feelings of sadness.

Yoga has been shown to help balance out the endocrine system by pressurizing and releasing various glands as you practice specific yoga postures. The movements and postures within yoga can help bring your hormone levels back to proper functioning to help increase mood, proper digestion, weight loss and more balanced energy levels.

Studies have found that a regular practice of yoga, deep breathing and meditation can cause levels of cortisol, the main stress hormone, to drop, leading to lower levels of stress.

As reported in 2005 by Sat Bir Singh Khalsa, Ph.D, assistant professor of Medicine at Harvard Medical School, researchers in Germany found that women with mental illnesses reported feeling less stress and fatigue after three months of regular yoga classes. After just one yoga session, they discovered that even the subjects’ saliva contained less cortisol.

Yoga has also been shown to trigger the release of the hormone oxytocin, which essentially floods your body with feelings of positive emotions, relieves anxiety, increases sexual intimacy, regulates cortisol levels, and can stimulate social interaction – which can all lead to increased levels of happiness and wellbeing in life.

In a study focused on yoga therapy and schizophrenic patients, oxytocin levels were measured within two groups, a control group and a group of yoga practitioners. Results showed that oxytocin levels significantly improved in the group practicing yoga.

Yoga and The Autonomic Nervous System

The practice of yoga and meditation has been shown to create a sense of balance and union between the mind and body. In our busy, stressful lives we are constantly activating our sympathetic nervous system (fight-or-flight stress response), which creates agitation and stress – quite the opposite of a blissful state.

With regular practices of yoga and meditation one can activate the vagus nerve and shift from the sympathetic nervous system to the Parasympathetic Nervous System (relaxation response), resulting in a slower heart rate, decreased blood pressure, lower cortisol levels and lead to a more balanced and happy state of mind.

As a yoga instructor myself, students are constantly informing me of how yoga decreases their stress levels and positively affects their happiness and overall state of wellbeing. With the scientific research that continues to confirm how yoga and meditation techniques can improve brain health, balance the nervous system, improve sleep, decrease stress and ultimately lead to happier and healthier lives, why wouldn’t you give yoga a try?

Do not feel that you must be a master of yoga postures or meditation to start. With regular practice, you will start to reap the many benefits of this ancient – and scientifically backed – practice.

You May Also Like To Read – International Day of Yoga: Awareness on the Benefits of Yoga