Everything You Need To Know About Sage- Uses, Benefits & More

Sage (Salvia officinalis) refers to a medicinal herb used in the treatment of digestive problems like flatulence, loss of appetite, diarrhea, heartburn, and bloating among others.

In addition, Sage has been used for several years in treating depression, memory loss, and Alzheimer’s disease.

It also improves menopausal symptoms like hot flashes and painful menstrual periods. When used on the skin, it can ease signs associated with gum disease, sore mouth, cold sores and certain nasal problems.

Sage usage has spread in various fields including in the food industry as a spice and in the production of cosmetic products. Asthmatic patients inhale Sage to ease the symptoms that come with the condition.

Where does it Come from?

Sage is extracted from the leaves of a perennial, evergreen herb native to the Mediterranean region. The herb has grayish leaves, blue to purplish flowers and a woody stem.

What are its Possible Health Benefits?

Sage has several health benefits which include the following: 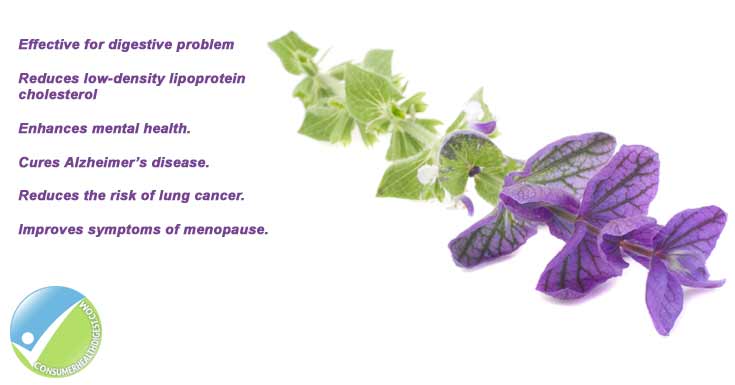 What are the Potential Side Effects of Sage?

In fewer amounts, like commonly used in foods, sage is considered safe. It is also safe when taken by mouth or applied directly on the skin. Nevertheless, in higher doses for a long duration, Sage can be dangerous.

It contains a poisonous chemical (thujone) that can cause seizures, liver damage or alter the nervous system. Studies have shown a strong link between thujone and a reduction in milk production in breastfeeding mothers.

Always check your sugar levels if you use Sage and you are diabetic as it may lower blood sugar in diabetic patients. People with hormone-sensitive conditions like uterine fibroids, ovarian cancer, and breast cancer may experience similar effects if they use Sage. Other possible Sage side effects include high blood pressure and seizures.

Recommended Doses and Timing for Sage

Dosing and timing for Sage depend on the condition being treated. Scientifically researched recommendations for treating Alzheimer’s disease is the daily consumption of 1 milligram of Sage.

You should eventually increase the dosage to a maximum of 2.5 milligrams thrice in a day. For cold sores, apply 23 milligrams of Sage topically on the affected areas after every 2 to 4 hours during the day for 10 to 14 days.

Always remember to check manufacturer’s directions for use as dosing and timing may vary when dealing with other health problems.

Uses of Sage in Supplements

Sage is available in the form of a supplement. It is included in several products for treating mental conditions, low mood, and loss of appetite, poor concentration, and poor memory, Obesity, ADHD and Alzheimer’s disease among others.

While Sage can be effective in the treatment of several health conditions, it should not be used to replace prescription drugs. You can use it as a dietary supplement to prevent the occurrence of various diseases.

Do not use Sage if you are already on medication for diabetes as it can decrease blood sugar to the extreme.

It should also not be combined with anticonvulsants, the medication used for treating seizure or sedative drugs.

This is because Sage may interfere with the brain chemicals balance created by prescribed medications, which can worsen the symptoms.

Being a naturally extracted ingredient renowned to have several benefits to human health, Sage appears to be one of the most important compounds you should look for in any supplement.

It has undergone scientific researches and found to be effective in easing symptoms associated with Alzheimer’s disease and cold sores. Although more research is still needed, it is suggested that Sage may still be helpful in the fight against many other diseases.

It is safe in small amounts like in our foods and supplementation can be obtained in local drugstores.