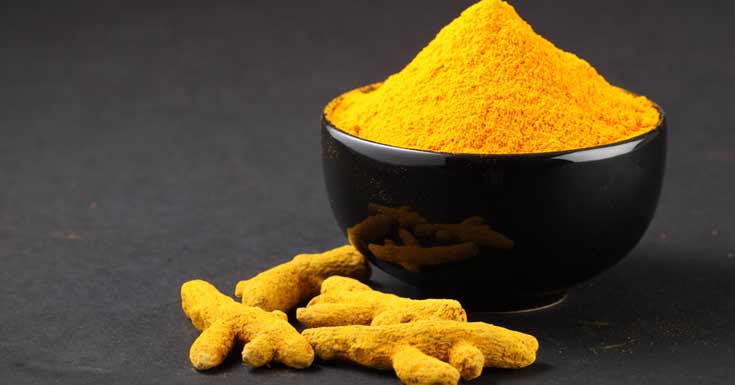 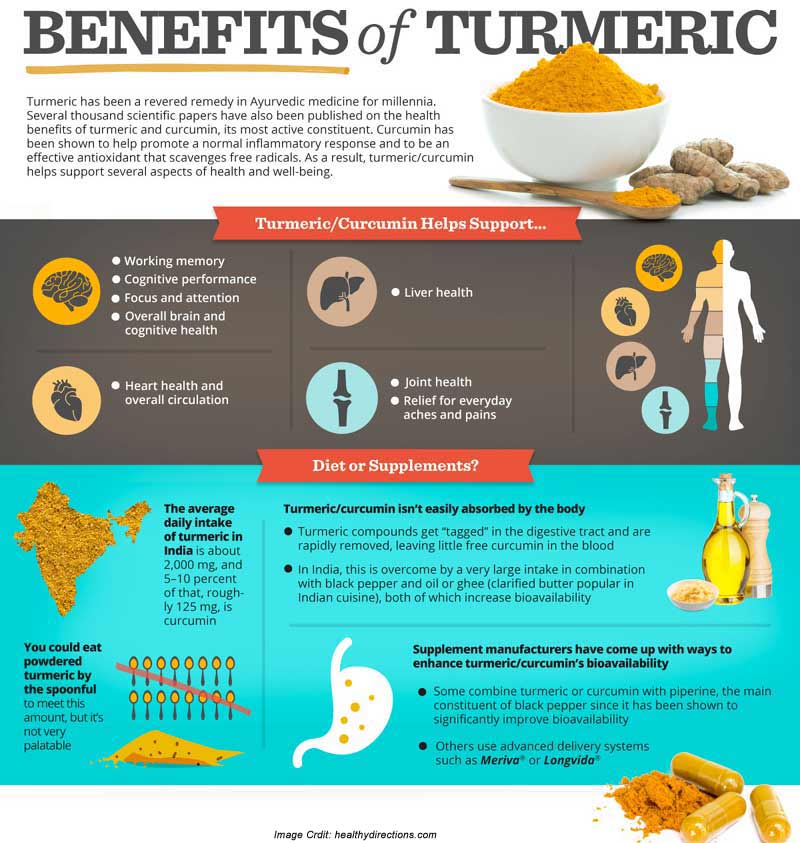 Turmeric might be one of the most powerful healing agents in the world. It’s a spice that’s very popular among Persian, Indian, and Pakistani cultures and has medicinal purposes that’ll blow you away. The benefits of turmeric come specifically from one of its compounds, namely curcumin.

Turmeric has been shown to influence more than 700 genes in the body and has been used in Chinese medicine for ages. If you haven’t already started looking online to see where you can buy this golden spice after reading that, don’t worry, you can find this amazing spice at just about any grocery store.

Let’s jump right into the top 10 benefits of Turmeric for your health!

Curcumin, the most important and active compound in turmeric is among the most potent anti-inflammatory agents in the world and shows much greater effects than any over the counter drug you’ll find. Additionally, unlike other OTC drugs which decrease white blood cell count, curcumin doesn’t produce any toxicity making it a much safer choice.

Curcumin, in addition to being a powerful antioxidant, also boosts the body’s antioxidant production which effectively increases the overall antioxidant capacity of the body. By protecting us and eliminating free radicals from our system, curcumin helps the body fight against age-related disease and age related decline.

In the past we thought that once your brain developed, you couldn’t produce any additional neurons. What you had is what you were stuck with. Until researchers studies turmeric did we find that it actually boost BDNF which is a type of growth hormone that functions in the brain. BDNF actually creates new neurons and encourages differentiation of synapses in the brain. BDNF is also important in long-term memory and helps boost overall cognitive function. If you’re looking for brain health, this is it.

Another one of Turmeric’s highly recognizable benefits is its effect on digestion. Turmeric helps cleanse the digestive system while at the same time detoxifying the liver. An important part of your health is being able to effectively get rid of waste and turmeric is a perfect nutrient to help you do just that.

Turmeric has been studied across various channels and in many research studies. Many studies have shown that turmeric is a powerful anti-cancer treatment. The results showed turmeric prevented the spread of cancer cells, shrank tumors and killed more cancer cells than chemo-therapy. Interestingly, they also found the curcumin actually “targets” cancer cells and while it’s not the cure-all for cancer, it does work synergistically with other cancer-treatments to powerfully eliminate and reduce the spread of cancer.

Appearances of aging come from many factors including diet, air pollution, smoking, drug and alcohol use, sun exposure and genetic background. If you’re looking for an incredibly powerful anti-aging compound, turmeric is it. Because turmeric is so strong in antioxidants, which inhibit oxidative stress and free radicals in your body, you get the benefit of its anti-aging capability.

Studies have shown curcumin significantly reduces insulin resistance and lower blood sugar levels similar to a plant-based diet. Because of this, turmeric is a great spice to incorporate into your diet if you have type 2 diabetes, or if you’re just looking to gain control over your insulin levels. Keeping steady insulin levels contributes to your long term health in my many ways, namely lower body fat levels and more consistent energy.

We’ve all had the thought “my poor liver” from the night of drinking we did before. If you’re looking for a powerful liver detox agent, turmeric is one of the best choices. It actually comes in the form of a tea as well which is great to have if you’d rather have a liquid than it being mixed in with your dish. Turmeric tea cleanses and purifies the blood, improves circulation in your body, improves skin complexion and boosts immunity as well. A perfect drink to keep your body and liver in great working condition.

Curcumin’s benefits just don’t seem to end. Curcumin is a powerful anti-bacterial and anti-viral agent as well which keeps your body’s defenses strong and immune from sickness and disease.

Many traditional medicines have used turmeric as an anti-inflammatory and pain treatment medicine. Specifically, curcumin is responsible for reducing two enzymes in the body which cause inflammation. Turmeric is a natural pain killer that many choose over the more common over the counter drugs. Considering its nature in helping the liver rather than stressing it, we definitely feel it’s a better choice.