When it comes to training the shoulders, some underestimate the importance to why they should be included in a workout. For instance, not a lot of people are aware that the shoulder is the most moveable, adding an unstable joint in the human body.

The ball, which is located above the upper arm, is actually larger than the socket holding it. The shoulders range of motion can be great, the downfall being, it’s also susceptible to injury.

To avoid injuries, shoulders should be stable, muscles kept in place, including ligaments and tendons.

To enable this, it is highly recommended to make sure that soft tissues are strengthen, assisting the shoulder in keeping strong, flexible, more coordinated, and conditioned to combat stress leading to injuries.

Here Are My Top 10 Shoulder Workouts To Try Out And Strengthen Your Shoulders And Avoid Injuries. 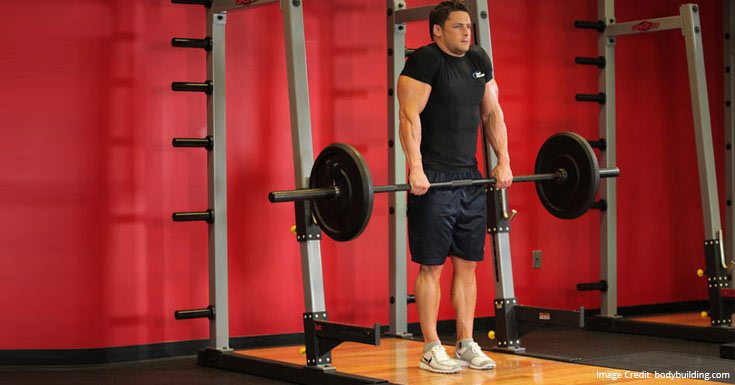 Starting Position – Stand with feet hip width apart, knees slightly bent to stabilize the bottom part of the body from swinging. Hold barbell with both hands and palms facing the thighs.

Elevate shoulders up as far as you can go breathing in, and then hold for a few seconds breathing out as you go back to starting position and repeat.

Tip: Hands should be little wider than shoulder width.

Holding the barbell across front of your upper chest, palms should be facing forward and your grip on the bar should be slightly wider than your shoulder.

Push barbell overhead, straitening your arms to take a deep breathe in. Slowly return to starting position and make sure movement is under control as you breathe out, repeat.

Tip: If you suffer from lower back pains, you can also do the same sitting down; just make sure back is supported. 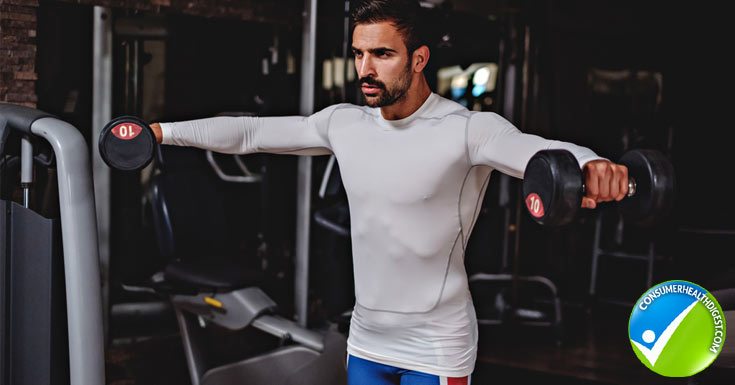 Starting Position – Standing with feet hip width, knees slightly bent and make sure back is straight, to brace your core. Hold a dumbbell in each hand by your side.

Slowly lift arms with dumbbells to the side; breathing in until arms are parallel with the floor, making sure elbows are slightly bent.

Now lower the arms back to starting position slowly and controlled, breathing out and repeat.

Tip: When lifting arms to the side, make sure you don’t raise arms higher than shoulders.

Starting Position – Standing hip width, with a slight bend in knees and holding a dumbbell in each hand at arm’s length placed on the front thigh. Lift the right arm until it’s parallel with the floor, pausing for a second and bring right arm slowly down breathing out, then do the same on the left arm.

Tip: When lifting the weights to the side also make sure you don’t raise your arms higher than your shoulders. 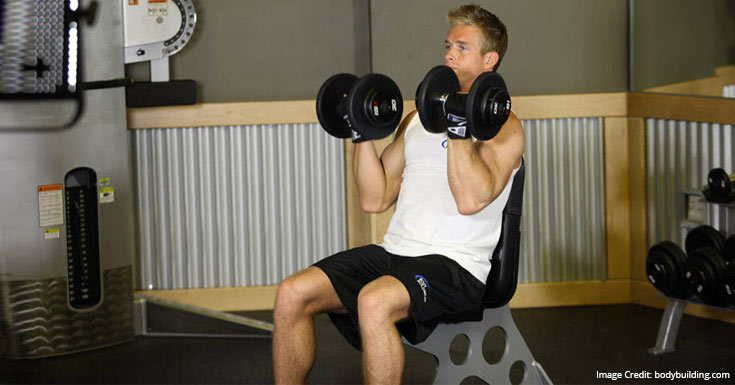 Starting Position – Stand straight, hip width; hold two dumbbells in front at upper chest level. Palms facing your body and elbows bent. Raise dumbbells as you rotate the palms of your hands until they are facing forward.

Continue lifting dumbbells until arms are extended above you in a straight-arm position and breathe in.

After a second pause at the top, begin to lower the dumbbells to the original position by rotating the palms of your hands towards you breathing out.

Tip: For lower back suffers it is advised to sit down whilst doing this exercise.

Holding a dumbbell bar with an over hand grip, slightly less than shoulder width.

Bar should be resting on top of your thighs, with arms extended, with a slight bend in the elbows.

Exhale using the sides of your shoulders to lift the bar, raising your elbows up to the side. Make sure you keep the bar close to your body as you raise it. Continue to lift the bar until it nearly touches your chin. Now lower the bar back down slowly to starting position, inhale as you perform this movement and repeat.

Tip: Elbows should drive the motion and always be higher than the forearms, also keep the torso stationary and back straight. 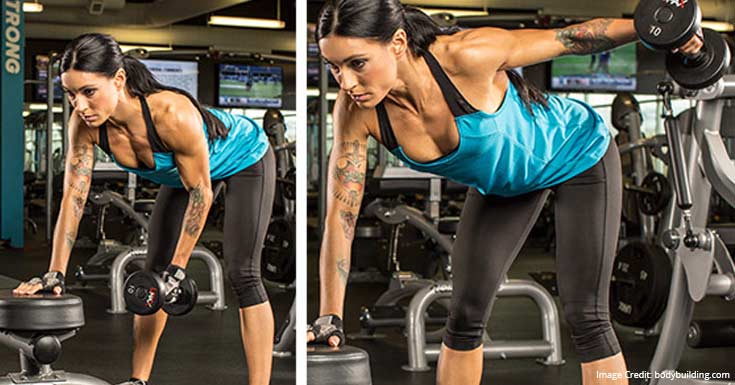 Starting Position – Bend at the waist until torso is nearly parallel to the floor.

Legs should be slightly bent with left hand placed on your lower thigh.

Holding in right hand a dumbbell and raise it no higher than your shoulder, breathing in then breathe out when bringing dumbbell back to starting position, change arms and repeat.

Tip: Keep your back straight throughout.

Starting Position – Lay facing down on an exercise bench, holding a dumbbell in each arm, below your chest with elbows slightly bent. Raise both dumbbells to your sides until your arms are close to being parallel to the ground and lower them back down slowly after a short pause.

Tip: Breathe in as you raise your arms outward and exhale out whilst coming back to starting position.

Place resistance band over the top of your arm around the bicep area and hold your hands.

Note: Elbows should be pointing outward by your side slightly wider than your shoulders.

Tip: Push through the shoulders as your top arm assist against resistance band and repeat. 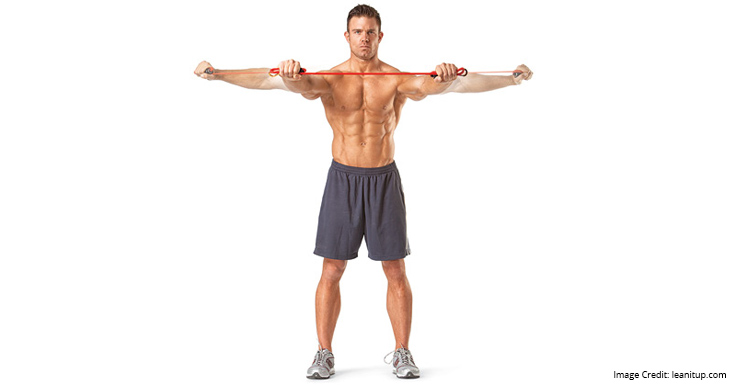 Starting Position – Stand with feet shoulder width apart, placing the resistance band just over elbows and lift arms up above head and push with the shoulders out.

Also See: XtremeNO Review; Supplement designed to increase the strength and endurance of the muscles.

Including a shoulder routine 1-2, a week not only lessens your chances of injuries, it also promotes better posture, lessening the chances of developing a bad back.

Helena love for sports came at the young age. Having committed to years in the art of Kyshindo (martial arts), later going onto Muay Th Read Full Bio