Estrogen and Breast Cancer Risk – Are Female Hormones at Fault?

After being a practicing chiropractor and natural health practitioner for over 25 years, I was diagnosed with breast cancer in 2010.

The diagnosis was a real wake-up call for me. It kick-started my passion of educating and supporting others on their healthy breast journey through my 7 Essentials System ™ and the Breast Cancer Conqueror website.

Over the years, the “hormone factor” and how estrogen levels affect breast cancer continue to be the most confusing elements for the majority of women I meet.

If you are just beginning your journey with breast cancer, you may have even been recommended strategies, including what and what not to eat, for lowering your estrogen levels across the board.

Dismissing naturally-produced estrogen in your body, however, is not the answer.

Here’s the real truth: every one of your naturally-produced hormones has a purpose in your body.

On the other hand, artificially-produced hormonal substances, especially Xeno-estrogens and other endocrine disruptors, can absolutely raise your risk of breast cancer.

Xenoestrogens are unhealthy foreign chemicals[1] and are sometimes referred to as “endocrine disruptors.” They exist in the air we breathe, the water we drink, and the commercially-produced food we ingest.

They can also be found in commercial cleaning and personal care products. Once xenoestrogens get inside our bodies, they can mimic certain kinds of estrogen. Here are just a few sources of Xeno-estrogen in our world today: 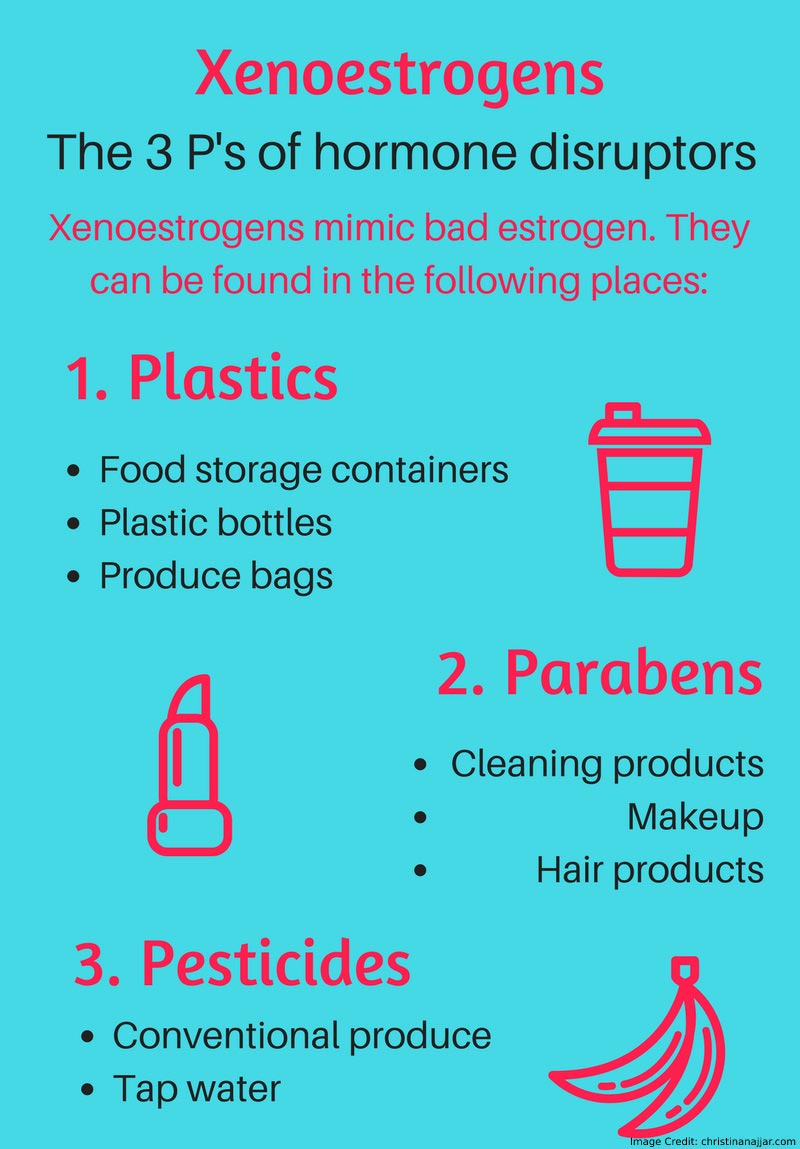 Infograph:Xenoestrogens the 3p’s of harmone disruptors.

What Xeno-Estrogens do to the Body?

Did you know that your body produces more than one kind of estrogen? The main kinds[6] are estrone (E1), estradiol (E2) and estriol (E3).

Within this trio, estradiol (E2) is considered the most aggressive. When the body is in balance and free from toxins, it knows exactly what the balance between E1, E2, and E3 should be to maintain health at any age.

When Xeno-estrogens come on the scene, however, they throw this balance off.

They tend to specifically mimic estradiol, creating an even more aggressive form of this kind of estrogen than what is typically produced by the body.

What does it mean for a form of estrogen to be “aggressive?” Estrogen influences dozens of functions in the body (not just reproduction) and it initially does this through connecting with cellular receptor sites.

An estrogen molecule will fit inside a receptor site as a lock fits inside a key.

Xeno-estrogens are bullies in the body; they will push more benign and even cancer-protective estrogens aside in order to lock themselves into sites reserved for naturally-occurring hormones. 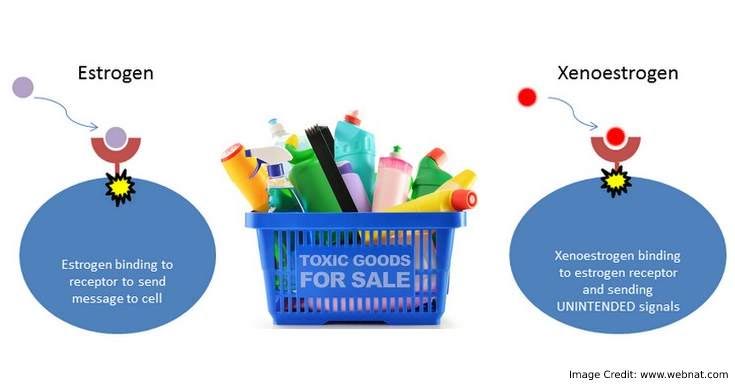 Image shows the vicious cycle of Estrogen and Xeno-estrogens

You can see the vicious cycle: the more you are exposed to Xeno-estrogens, the more these sites in the mammary glands and elsewhere are taken up by estrogen mimics.

High levels of Xeno-estrogen can be found[7]in almost all cases of invasive breast cancer.

A 2016 study[8] conducted by the National Center for Epidemiology in Madrid, Spain compared Xeno-estrogenic (or “oestrogenic mimic”) activity in healthy women to those who had been diagnosed with breast cancer.

The women with breast cancer had significantly higher levels of oestrogenic mimic activity than those who did not.

Other studies have established the link[9] between high Xeno-estrogen levels and low estrogen methylation in the body.

Methylation is necessary for the metabolism of hormonal and other substances.

Poor estrogen methylation is one of the main ways that so-called “estrogen dominance” which is really estradiol-mimicking Xeno-estrogenic dominance, occurs in women with high breast cancer risk.

Unfortunately, breast cancer is just the tip of the iceberg when it comes to how Xeno-estrogens can negatively affect health. Oestrogenic mimics have also been linked to:

Some studies, such as a 2014 investigation[11]
published in The Journal of Basic & Applied Zoology, are also finding that high levels of Xeno-estrogens can lead to cortisol imbalance and hypothyroidism. 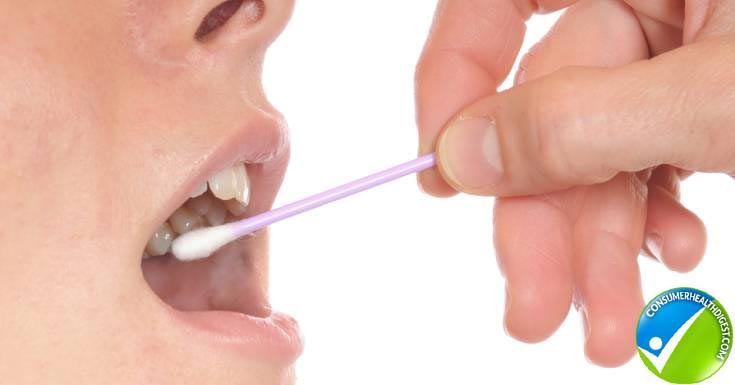 With all this evidence linking so many outside sources to Xeno-estrogen and breast cancer, what can we do to protect ourselves? Here are FIVE THINGS you can do now:

[1] Get your “EQ” checked – Knowing what your estrogen levels are, along with levels of other hormonal substances such as vitamin D and iodine, is the first step towards breast cancer prevention. The Estrogen Quotient (EQ) saliva test analyzes levels of all three estrogens E1, E2 or E3—as well as the relationship between them.

[2] Be Aware of Friendly Estrogens – As I mentioned above, some forms of estrogen can help you prevent breast cancer. Many studies[12] point to the fact that higher levels of estriol (E3) can have a cancer-protective effect. This is because high E3 can fill cellular receptor sites in the breasts that Xeno-estrogens would otherwise fill.

Begin to incorporate foods such as flax seeds and chickpeas, which contain milder estrogens, into your diet.

A 2005 University of Toronto study[13] found that women who ate muffins containing 5 teaspoons of flax seeds every day lowered their tumor markers significantly.

According to the researchers, “(d)dietary flaxseed has the potential to reduce tumor growth in patients with breast cancer.”

[3] Get Rid of Mercury – Filled Amalgams – If you have any metal fillings in your mouth, take measures to have them safely removed by a qualified biological dentist.

Did you know that up to 50% of your “silver” fillings may actually be mercury? Mercury and other heavy metals are major endocrine disruptors[14]. If you have them in your mouth, they will outgas their toxic poisons every time you chew. 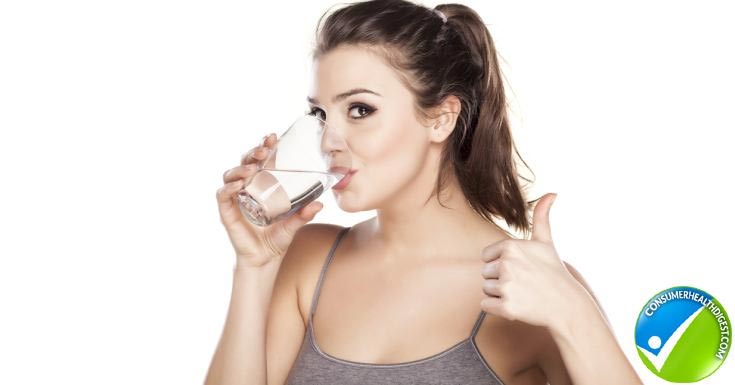 Image shows How to Detox and Balance Your Body Through Right Eating. Shutterstock Images.

[4] Detox and Balance Your Body Through Right Eating And Lifestyle – Enjoying vibrant, cancer-free health involves making lifestyle changes that you can consistently and easily incorporate into your daily routine.

Breast cancer is a serious disease condition that affects one in every 8 women. On the other hand, experts says that 9 out of 10[15] cancer cases, in general, are caused by lifestyle! This means that your personal risk for cancer is largely up to you.

Get the real facts when it comes to your hormones and lead a vibrant, balanced and cancer-free life now!

Dr. Veronique Desaulniers, better known as Dr. V, is the founder of The 7 Essentials System, a step-by-step guide that teaches you exac Read Full Bio