Medically reviewed by Melissa Feldman
0 Reviews
1 out of 5

What is NV Clinical?

NV Clinical is a weight loss supplement advertised to give you results within 2 weeks. The manufacturer of this product believes it is the fastest start to weight loss. It was formulated to make it easy for people trying to burn fat. The product is also claimed to be backed up by 2 clinical studies.

We did visit the manufacturer’s website and the first impression we had is that it looks professional. We certainly could not miss that good looking woman that is claimed to have lost 25 pounds. We found out she was Tami Roman, the wife of a famous basketball player. Our only problem here is that the company behind this pill fails to mention the ingredient for which they claim is backed up by 2 clinical studies.

So we figured out it was a good idea to dig deeper into this product and find out what it is all about. Here is an honest review.

Which Company is Behind NV Clinical?

NV Clinical is actually a supplement from the company NV Clinical[1]. We did point out in the introduction that the manufacturer’s website looks professional. Yet somehow, they forgot to include an “About Us” page. There is no single page on the website describing what the company is all about.

NV Clinical is offering 3 versions of its weight loss supplements but remains mysterious about which of them were used by the Tami Roman to get results. And again, they claimed that the basketball player’s wife lost 25 pounds in 15 weeks.

The blend used in the standard supplement is claimed to be made of a “weight loss complex” and a “Superfruit complex”. The proportion of ingredient for each of these complexes was not revealed.

Weight Loss Complex: This complex contains Indian Sphaeranthus and Mangosteen. Some believe those are the main ingredients in the best diet pills. Indian Sphaeranthus is a plant used in Ayurvedic medicine to cure indigestion[2]. As for mangosteen, it is believed to help people lose weight [3] by giving them control over their appetite.

Superfruit Complex: This is made of different fruit extract including caffeine, cranberry, goji berry, pomegranate, grape, litchi, bilberry, and turmeric. The role of this complex is probably to supply the body with essential minerals and vitamins.

The Sprinkle Version: The sprinkle version of NV Clinical is made of a completely different set of ingredients. Actually, it only contains one ingredient and that is chromium. It is a mineral found in the body that is believed to influence the level of glucose in the blood[4].

Looking at the ingredients above, we don’t see how exactly they can give you result in 2 weeks but that is what the manufacturer claims.

We are not aware of any side effect resulting from the use of this product. We would suspect that the caffeine content inside supplement can cause certain side effects but again the caffeine-free version is available so it is up to the user to choose accordingly.

One thing weird about NV Clinical is that it is advertised to give results within 2 weeks and yet on the official website it showcases a lady who lost 25 pounds in 15 weeks. It looks like the manufacturer is trying to play tricks. We don’t know the specific amount for each of the ingredients used so we can’t even tell if they were supplied in sufficient amount.

Looking at the customer reviews on Third party retail website, it is clear that this product has disappointed most of those who tried it. With a rating of 2.1 stars over 5, it is obvious that the product did not satisfy expectations. Out of 39 customers, 23 rated it 1 star. The rating speaks for itself.

Q: Are There Any Guarantees?

A: Yes. The manufacturer has clearly stated on its website that if you don’t get any results within 30 days, you can claim your money back. The only condition is that you should be able to produce the receipt for the purchase.

Q: Where can you purchase NV Clinical?

A: NV Clinical is available online on their Official Site.

Q: How to take NV Clinical?

A: The recommended dosage of NV Clinical is three caplets per day with water.

A: It helps to make it easy for people trying to burn fat. It also helps to increase alertness and boost energy levels to some degree.

Q: How much is NV Clinical?

A: NV Clinical cost $49 on their official website/dealer.

Q: What are the side effects of NV Clinical ?

A: NV Clinical contains caffeine content inside the supplement may cause certain side effects.

Q: What are the ingredients used in NV Clinical ?

Don’t bother to try NV Clinical. There are many other better weight loss products out there. The company behind the product is mysterious and has a bad history when it comes to its claims. This product is not backed up by any clinical studies and nobody really knows the composition of ingredients. Just look for something else.

NV Clinical can be purchased through their Official WebSite. 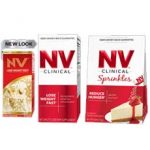