What is MetaboLife Ultra?

MetaboLife Ultra is a weight loss supplement claim to be made of herbal formula that can enhance your feeding habit while providing you with energy. The product is advertised to be made with clinically tested ingredients that can help your body size reduce in inches.

With the help of this pill, your BMI should reduce faster than if you were relying on diet and exercise alone. At least that is what the manufacturer wants us to believe. The name “MetaboLife Ultra” is not really new in the market.

The product itself has been around for a while but the brand behind the supplement was sold out and the original product has been renovated to something new. In the early days of the brand Metabolife, certain of its products were believed to be dangerous because they contained substances like caffeine and synephrine.

Since the brand was bought out, a few changes have been made to the product and that is why we propose to check out MetaboLife Ultra again to find out what is new about it.

Who is the Manufacturer of MetaboLife Ultra?

By hearing the name “MetaboLife”, you might think that is the manufacturer of the supplement and you would have been right some few years ago but that is not the case anymore. The brand MetaboLife International was eventually bought by another company known as Twinlab Corporation.

The renovated MetaboLife products are now recapturing the attention of users and this may have to do with the experience coming from Twinlab. Keep in mind that Twinlab is a company that has been around since 1968 so it has the know-how and expertise when it comes to the marketing of supplements.

The new version of MetaboLife Ultra is believed to help users achieve more out of their exercises and good feeding habits. Let’s find out if that is the case.

How Does MetaboLife Ultra Work?

We cannot claim that you will certainly see good results out of using this weight loss supplement but it does contain a number of interesting ingredients that can affect the way fat cells accumulate in your body. Chances are high that this newer version performs better than its predecessor.

The original version of MetaboLife Ultra was advertised to be made with a proprietary blend. But for the newer version, the manufacturer decided to reveal all the key ingredients in their respective quantities. Here they are:

Other ingredients found in the supplement include calcium, chromium[4], sodium, and potassium. The supplement is wrapping in a gelatin capsule.

Q: What Kind of Reviews are Out there for MetaboLife Ultra?

A: We took a look at what the customers had to say on retailer site and the overall impression is that the supplement is doing relatively well with an average rating of 3.6 from 48 different customers.

We need to point out that some people did prefer the older version to the new and that is one of the reasons they gave a lower rating this time. That been said, most users felt energized with this product and some claimed to have lost some weight.

In the past, we would have advised you not to even bother to try MetaboLife Ultra. But since it’s been re-formulated and owned by another company, maybe it is time you give it a try.

If appetite control has been one of your biggest challenges, this supplement can be of help. And, it is not so expensive so why not. There are more unbiased diet pill reviews available which help you to reach the final decision. 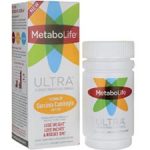