Leptopril is a weight loss formula based on another much more expensive pill known as Leptoprin-SD. Leptoprin-SD could not make it in the market because it was just too expensive ($153). Leptopril contains exactly the same compounds found in Leptoprin-SD except it is sold at half the price.

According to the manufacturer, this supposedly new weight loss formula offers the same results as its predecessor, except it is much more affordable. The product is claimed to be designed for the significantly overweight person and not the casual dieter. By that, they are referring to people weighing 20 pounds more than what they should be weighing.

Leptopril is presented as the supplement formulated for those who just can’t lose weight because of the genes they carry. We don’t know if the product can work as the manufacturer claims but we decided to review it and help you make a decision about it. After all, $74.99 is not cheap so if you intend to spend that kind of money, you want to be sure of what you are doing.

Who is the Manufacturer of Leptopril?

On the bottle, it is clearly written Generix Laboratories. On the company’s website, Leptopril is the only product available. It is surprising that even the official website doesn’t say much about the manufacturer. To get to know more, we had to head to the Better Business Bureau to see the company’s rating.

The BBB did try to get in touch with the company to give it a chance to substantiate its weight loss claims. As of May 30, 2012, Generix Laboratories failed to reply. Also there have been 2 complaints filed against the company but for now none of them have been replied.

Generix Laboratories are quite bold in their claim that Leptopril can help people genetically predisposed to be obese. So when they fail to substantiate such a claim, we have all the reasons to doubt them. At least the ingredients used can tell us more about the product.

How Does Leptopril Work?

Leptopril is advertised to be a stimulant that can curb your appetite and raise your metabolism. The specific amount of ingredients used was not provided because it is a proprietary blend but we do know that a serving of 2 capsules makes 502 mg. We did notice that on the official website, Leptopril has been referred to as a “weight-control compound”. Let’s be clear about it. There are many different compounds involved in the formulation of this pill, not just one.

Leptopril Ingredients – Are they Safe & Effective?

Other ingredients found in this formula are Schizonepeta Tenuifolia, Rhodiola Rosea, Forsythia Suspensa Vahl Attractive and Coleus Forskohlii. There is also a set of amino acids included in the pill. Their role is to act as building blocks of proteins and participate in the metabolic processes.

The principal stimulant in the entire formula is caffeine, which is not an ingredient you can’t find in other supplements. So we don’t know why this product is so expensive.

We don’t know the exact quantity of ingredients used in the formula but we do know that the supplement does contain caffeine. When taken in certain quantities, caffeine can cause certain users to suffer from anxiety and insomnia.

For safety reasons, it is not advised that pregnant women try this supplement. This same rule applies to people with high blood pressure. If you are on any medication, first consult your physician.

Each capsule of Leptopril contains too many ingredients and yet they weigh only 251 mg. We don’t think the ingredients involved in the formula are provided in sufficient amount to cause any serious effect.

What Kind of Reviews are Out there for Leptopril?

We took a look at the testimonials left on Amazon and they are mixed. The product has received 11 reviews, 5 of which are rather negative and 6 positive. The general complaints we could get from the negative reviews is that the product did not deliver.

Even those who claim to have obtained good results out of the use of this supplement had to admit that they had to exercise often to get chosen.

You don’t want to spend $74.99 on a product that contains ingredients you can find elsewhere for a much cheaper price. Generix Laboratories have already tried selling that same formula for $153 but nobody bothered to try it.

So now they are testing the market with half the original price. We don’t think people will take the offer. The manufacturer will have to drop its price further down if they really want people to try it. 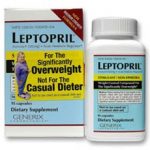