Coppertone Clearly Sheer Whipped is a sunscreen helps to protect the skin from harm caused by the sun's UV rays.

Reviewed by Carola May

Coppertone Clearly Sheer Whipped is a sunscreen that was formulated to protect the skin from damage that is caused by ultraviolet rays from the sun.

Most sunscreens available in the market today leave an unattractive mark on the skin after drying up. Coppertone Clearly Sheer Whipped has been improved to curb this issue.

This will enable the user to look good as well as feel good. As the name suggests, Coppertone Clearly Sheer Whipped is whipped. This texture does not allow any form of stickiness to form on the skin.

Coppertone Clearly Sheer Whipped comes in two different formats. These are seen in the SPF levels where one is 30 and the other is 50. SPF is known to protect the skin from harmful UVB rays.

The level difference at which these two formats protect the sun is not very significant. The SPF 30 blocks 97% percent while the SPF 50 blocks just a little below 98%.

Coppertone Clearly Sheer Whipped is a product of Coppertone. The following claims were made on the package and the official website

Consumers are advised to put on Coppertone Clearly Sheer Whipped 15 minutes before going out to the sun. The following are the active ingredients used

Avobenzone-3% – It work as a sunscreen

Homosalate 10% – It is a sunscreen

Octocrylene 8% – It is also a sunscreen

Q: How Much Does Coppertone Clearly Sheer Whipped Cost?

A: One bottle of Coppertone Clearly Sheer Whipped will cost you $23.99

Summer is imminent. The sun is out and the heat levels are soaring. It is normal that many people will opt to spend this time of the year doing fun physical activities.

The fun is the glory of this season. Nevertheless, as we know, every season has some drawbacks that one may dearly pay for.
For summer, the major concern is usually the sunburns caused by staying out for a long time. What many people do not know is that the burning and irritation of the skin caused by the sun can lead to the appearance of premature signs of aging. This problem came as a market opportunity.

Many people invested in this market and today we have a ton of sunscreens to choose from; one of these is Coppertone Clearly Sheer Whipped. This product claims to protect you from both the UVA and UVB rays, which most sunscreens cannot achieve. Most of us do not know there are different rays.

Since this product claims to protect both, one should look out for other sunscreens that can achieve the same goals and compare their effectiveness before deciding on the sunscreen of your choice.

If you aren't already using a good sunscreen, make it a point to purchase one soon. You can either use it on top of your regular moisturizer or choose a product which combines both components. A product like this will protect your skin from harmful rays and from drying out.

Below are some of the best sunscreen products on the market today, in our opinion. 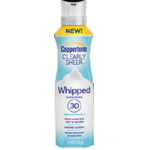