Castor Oil for Stretch Marks – Is It Really Effective?

Stretch marks are strips of damages to skin fibers which often become visible as white or silvery marks on skin. Sometimes, when skin damage caused by stretch marks is severe, they are deeper than usual and are often greenish or purplish. Stretch marks often appear on body parts that have considerable amounts of fats compared to other parts of the body like thighs, breasts, abdomen, back, and armpits.

Skin experts now believe that stretch marks result from a combination of mechanical and chemical processes that occur in the body. Excessive stretching of the skin due to pregnancy, and sudden weight gain or weight loss damages the elasticity of the skin. If the skin is stretched far enough, it becomes unable to go back to its original state before it was stretched.

While stretch marks do not particularly signal of any health problem, the person who has stretch marks may feel distressed with their appearance particularly if they are very visible and are located in areas of the skin that are often or normally exposed.

Several treatment strategies are available ranging from topical home remedies to laser and surgical treatments. None, however, have been able to completely demonstrate the ability to vanish stretch marks 100% of the time.

One of the more popular home remedies is the application of castor oil.

Castor Oil and How it can Improve The Appearance of Stretch Marks? 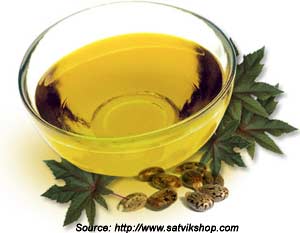 Castor oil is derived from the seed of the castor oil plant which is found in India. For many centuries, many uses for castor oil have been found. It was first a household staple for common ailments but most especially as an oral medication for relieving constipation.

Then, the aviation industry found it to be useful as an aircraft lubricant. Over the years, castor oil has been used for many industries, often as a binding agent for many manufactured products, including makeup and other skin care products. The pharmaceutical industry has also harnessed its many medicinal benefits including as a powerful anti-inflammatory, antiviral, and antibacterial properties.

Castor oil consists of 90% ricinoleic acid which is a triglyceride or fatty acid that makes castor oil a natural, super skin hydrating substance. Among the many skin care benefits that can be derived from castor oil are, it prevents sagging of the skin by acting as an effective moisturizer and lubricant, improves skin discoloration and age spots, and helps reverse and improve the appearance of stretch marks.

How to Use Castor Oil on Stretch Marks?

A small bottle of castor oil purchased from a drug store will suffice as very little castor oil is needed to prevent and help reverse stretch marks. To further enhance the moisturizing and skin rejuvenating effects of castor oil, mix one part of castor oil with two parts of either almond oil or, rose oil. Almond oil and rose oil are essential oils that have also been used for centuries to help improve the appearance of stretch marks. Mixing castor oil with these fragrant oils makes your topical stretchmark regimen more fragrant and feels more luxurious as well. 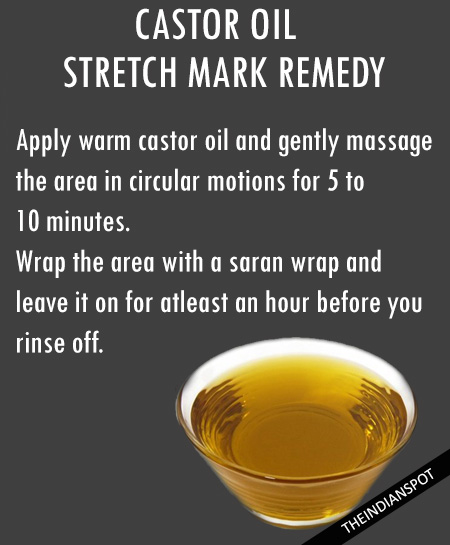 What are the Side Effects of Topical Application of Castor Oil?

Although castor oil has been used widely in many households and across most, if not all, industries, it is not without side effects. Even though the U.S. Food and Drug Administration, and the World Health Organization have issued statements that castor oil is not harmful to health, there are recent studies that suggest that excessive amounts of castor oil, whether excessively applied topically or taken orally, can be toxic. Experts caution castor oil users that it is possible to overdose with castor oil.

Signs of overdose may include dizziness, fainting, diarrhea, and tightening of the throat. If a possible overdose of castor oil is suspected, get in touch with your physician or head to the hospital immediately.

Pregnant women and breastfeeding mothers must also consult with their medical physicians before using castor oil topically to relieve and improve stretch marks as its use may have adverse effects both to the mother and the development of the baby.

Castor oil indeed has very many unique properties that make it the perfect binding ingredient for many products, including skin care products. Its unique chemical composition and its high fat content make it the ultimate skin moisturizing product that greatly increases the probability of healing skin and erasing the damages of unsightly stretch marks.

However, because many studies have also suggested several possible side effects of castor oil, and that its safety is still under debate, it may be best to defer its use for treating stretch marks to your medical physician and skin care specialist. When it comes to your health, and most especially when you are expectant, nothing is more important even if it means letting skin damage caused by stretch marks take its toll on your skin.

Besides, consulting with your physician may give your ideas as to other alternative remedies or treatments to stretch marks. Who knows, some of which may even have higher success rates than using castor oil.

Margaux Diaz is an inspirational writer who strongly believes in the power of self-motivation. She believes that every woman and man, n Read Full Bio