All You Need to Know about Poison Ivy, Sumac & Oac Allergy

Poison Ivy, Sumac, and Oak belong to Anacardiaceae family of poisonous plants. All three plants are of similar appearance and when touched, can lead to an uncomfortable rash. In most cases, the rash can be treated at home with topical medicine. In more severe cases, extreme allergic reactions may require emergency treatment. The plants are native to North America where it is estimated that 50 – 70% of people are sensitized to the toxins from these plants. To learn more about these plants, and what you can do if you have an allergic reaction to them, continue reading.

Recognizing these plants is the best preventive measure to avoid allergic contact dermatitis. The plants are sometimes hard to spot as they are inconspicuous in appearance. To help you learn how to recognize these plants, here are short descriptions of each:

Poison ivy grows as a vine shrub in many regions in North America ranging from Alaska to Hawaii. It usually grows alongside river banks and forest edges but also in city parks. It grows in clusters of three leafs and depending on the season, has green flowers and berries. Recognizing the plant is important if you want to avoid developing an allergic reaction while you’re out in nature.

Poison sumac grows as either a shrub or a small tree in humid areas. It is found in the eastern parts of the States, especially in swampy areas such as the banks of the Mississippi river. The steam of the poison sumac has pairs of up to 13 leaves. According to MedicineNet.com, it causes the most severe rashes of all three plants.

The poison oak also grows as a vine or shrub, and is similar in appearance to poison ivy while its leaves may resemble those of the true oak. The plant is usually found in the Western part of the States.

Touching the plants will result in allergic contact dermatitis within 24 and 48 hours upon exposure. This allergic reaction is a result of urushiol, a type of oil found in the plants. This oil is present in all parts of the plants such as the leaves, stems, and roots. Most of the skin reactions are a result of touching an injured part of the plant where urushiol has bled out. But indirect contact from clothes, pets, and from smoke from the burning plant can also lead to an allergic reaction.

Appearance of The Rash

The rash from all three plants is similar in appearance. It is characterized by severe itching and redness followed by blistering in severe cases. The rash frequently appears in streaks where the plant has brushed against your skin. How severe your reaction will depend on how much urushiol you were exposed to. The more time you spent around the plants, the more chances of a severe allergic reaction will be.

Some people may be especially sensitive to these plants and develop a severe allergic reaction. This often manifests as sudden and severe edema of the face, mouth, neck, and genitals. The blisters from a severe reaction are usually larger in size and emit large amounts of fluid. The swelling of the face may be so severe that you can have problems closing your eyes. 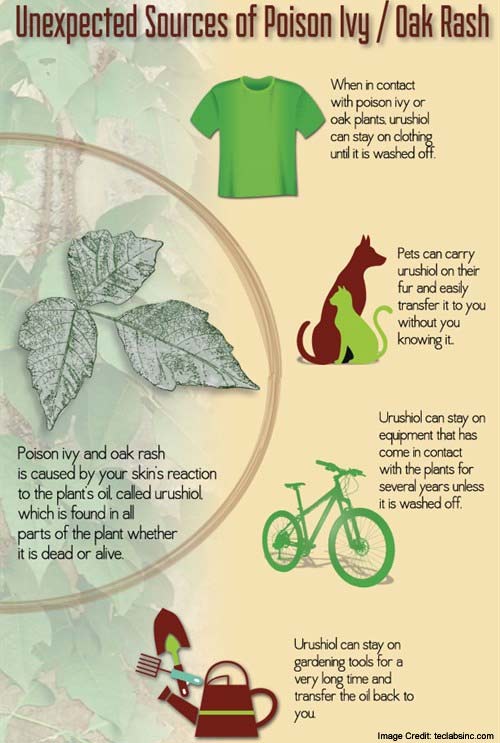 According to Water’s Edge Dermatology, the faster you react to the rash, the better the outcomes. The first thing you should do if you believe you may have come into contact with these plants is wash your skin. Water’s Edge Dermatology website also states that urushiol can remain on your skin and clothes for a long time which is why you need to change your clothes and wash thoroughly to prevent the rash from getting worse. When you do develop a rash, soothe the area with aloe vera gel or cold compresses. Avoid using hot water as this might spread the oil on your skin. Antihistamine medication is good to avoid strong allergic reactions. With treatment, the rash should completely resolve within one to two weeks.

If you know that you are allergic to these plants, wear long sleeves when going outdoors. Carry Technu or Zanfel washes with you as these are effective in quickly removing the urushiol from your skin. Learn how to recognize these plants and avoid coming into close contact with them. 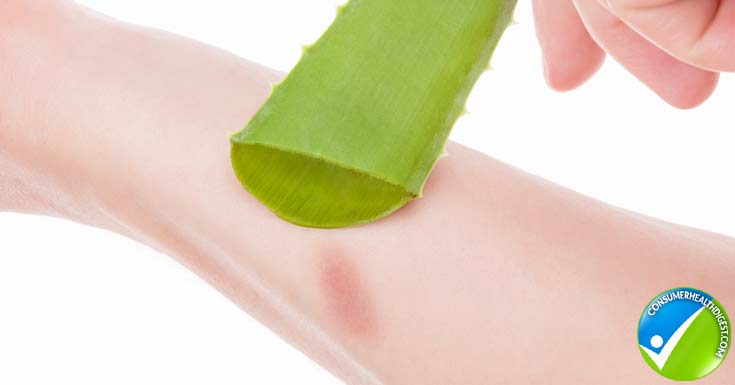 Poison Ivy, Sumac & Oak are frequent causes of allergic contact dermatitis in North America. The plants will usually cause an uncomfortable rash that may blister in later stages. Treatment can be carried out at home in most cases. However, in the cases of a severe allergic reaction with facial swelling, emergency treatment is a must. Recognizing the plants is one way to prevent getting a rash, but once you do get into contact with these plants, take immediate measures to reduce your allergic reaction.