Can Actinic Keratosis Cause Skin Cancer? Find Out

Actinic Keratoses refer to the dry and patchy skin lesions caused by accumulated UV damage to the skin. These types of skin tend to develop mostly in older persons with fair skin. If you believe you may have actinic keratosis (AK), you should consult a dermatologist because AK are considered pre-cancerous changes to the skin and if not treated, may progress into squamous cell carcinoma according to Water Edge Dermatology. To learn more about AK and common treatment options, we suggest you continue reading.

The term actinic keratosis is derived from the Greek word “aktis” meaning ray, and “keratosis” meaning a condition of the skin. Therefore, actinic keratosis translates as a condition of the skin caused by UV rays. UV radiation damages the skin’s DNA which, in some cases, leads to the development of AK. At the beginning stages, AK is not very visible. Most people first recognize AK by touch rather than sight according to the Skin Cancer Foundation. The feeling is described as sandpaper before progressing into larger lesions that range in size from an eight to a quarter of an inch. Dermatologists state that the presence of AK is an indicator that your skin has endured much sun damage and this may or may not lead to skin cancer.

Treating AK is advised because there is a potential for such changes in the skin to develop into malignant growths such as squamous cell carcinoma and, in very rare instances, melanoma. Medical experts are divided when it comes to defining AK according to an article published in The Journal of Clinical and Aesthetic Dermatology. While some consider AK to be precancerous growths, others believe AK is low-grade skin cancer. Furthermore, there aren’t enough studies on the frequency of AK developing into skin cancer, and the estimates range from 20% to 97%. One study on 220 cases of AK found that 1 in 25 of these cases was defined as early stage squamous cell carcinoma. However, scientists do agree about the lower incidence of both AK and squamous cell carcinoma with the use of sun protection. 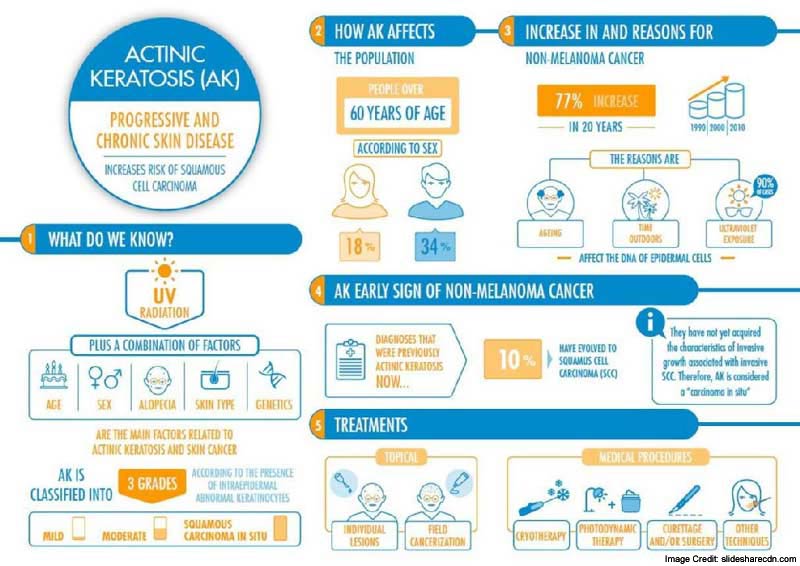 How is AK treated?

Dermatologists can easily diagnose AK through observation, especially in older and fair-skinned pa-tients. Avoiding further sun exposure and using adequate sun protection is the first treatment option to avoid AK from getting worse. Depending on the severity, location, patient health, and age, there are many treatment options available for AK all of which were found to be highly effective. Some of the treatment options are listed bellow:

Cryotherapy is an in-office procedure for a wide range of skin lesions including AK. It is performed by freezing the affected area with liquid nitrogen. To prevent hyperpigmentation following cryotherapy, doctors will prescribe topical treatments. The drawback to this type of therapy is patient discomfort and the fact that its use is limited to on small areas of the skin.

This is a topical form of chemotherapy that prevents the division of cancerous cells in AK. It is taken at low concentrations of only 0.5%. It usually takes only 4 weeks of topical application of this treat-ment to remove AK growths without causing any scarring. Fluorouracil is especially effective when used after cryotherapy. However, there is a great potential for skin irritation in most patients as a result of this treatment.

Another highly effective topical treatment, Imiquimod is ideal in treating large surface areas of AK. It is usually applied two days a week for 16 weeks. It works by modulating the immune system making your body fight off the lesions by itself. Its high efficiency was demonstrated in one large study with 436 participants with AK, half of the participants had a complete clearance of symptoms after the 16-week therapy. Other advantages of this treatment is that it is very well tolerated and when successful, has a long-lasting sustainability, meaning no new AK growths appearing long after the treatment is completed.

Must Watch out this Video

Photodynamic therapy involves the application of photosensitizing agents on the skin followed by blue or red light therapy to induce AK cell death. It may cause stinging and burning. However, it is also a highly effective treatment option. Another known treatment is diclofenac which is a type of topical NSAID. Its mechanisms of action remain unclear, but it is well tolerated although treatment lasts for more than two months.

If you suspect that the scaly patches on your skin may be AK, it is wise to consult a doctor as a pre-ventive measure against skin cancer. UV radiation is responsible for most changes happening to our skin with some of these changes leading to cancer. Although AK usually does not develop into the more malignant forms of skin cancer, it is better to prevent the condition from getting worse or even better, using strong sun protection to prevent the development of AK in the first place.