As a kid, I was healthy and active. I played baseball, ran all around my Chicago neighborhood, and rode my bike regularly.

But in my junior year of high school, I met a girl and fell in love. She wasn’t the most active person, and most of her meals were deep-fried and fast foods. I soon adopted her ways of eating, and stopped exercising. In the matter of a year, I went from weighing 170 pounds to over 215.

Long story short, my girlfriend became pregnant and gave birth when I was 17. And when I found out she had been cheating on me the entire time and that the child I had raised for a year wasn’t mine, my health plummeted.

I drank two liters of soda a day. I ate fast food for breakfast, lunch and dinner, not caring at all about the health consequences. I thought exercise was a joke, and it got to a point where I’d get winded just tying my shoes.

At 5 feet and 8 inches, I was rapidly approaching almost 230 pounds. But I didn’t realize that I was slowly killing myself.

Weight loss was not even on my radar considering I thought exercise was a joke… During this deep, dark period of my life, honestly all I thought about was eating, feeling depressed, and sleeping (or confused about the inability to sleep)

At this point, I was 18, the year was 1999, and I just graduated high school one year prior. Seemingly out of nowhere, I started repeatedly falling asleep at my desk at work. I even fell sleep while driving the company car. 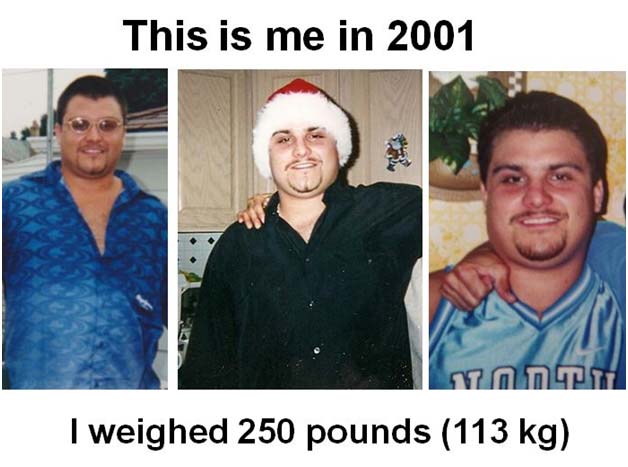 Denial Mixed With Depression – A Recipe for Illness

After a coworker reported the incident, my employer immediately sent me to see a doctor. I was glad – I also wanted to know what the heck was going on. I was sick of having no energy, falling asleep during the day, and never waking up rested.

My doctor diagnosed me with high blood pressure and, also suspecting that I had sleep apnea, arranged for an overnight sleep study.

The results showed he was right – I had severe obstructive sleep apnea.

The Diagnosis: What Is Obstructive Sleep Apnea?

If you have sleep apnea, your breath becomes very shallow and you even stop breathing at times.

With obstructive sleep apnea, there are repeated episodes of blockage of the upper airway while sleeping. These episodes are hard on your body, and almost always interfere with sound sleep.

It’s a scary disease to have – and I was terrified. In fact, my doctor said that if I didn’t do something immediately about the condition, I could die in my sleep or have a stroke or heart attack.

Do Something About it Already! 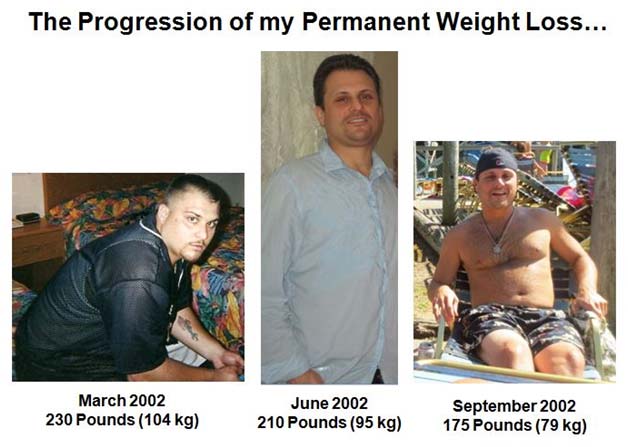 The Doctor gave me two choices: I could either have major surgery, or sleep with a continuous positive airway pressure (CPAP) machine, which forces airflow into your lungs at night, preventing breathing cessation. He also told me that either way, I’d benefit if I lost weight and exercised.

So what did I do? I chose the lazy way and decided to sleep using a CPAP machine. I continued the same nutritionally void diet and sedentary lifestyle.

It’s very uncomfortable to sleep with a hideous mask on your face all night. But with the CPAP, I felt rested for the first time in two years and was finally able to stay awake during the day.

Fast forward to New Year’s Eve, 2001. I was still sleeping great with the CPAP, but I was also the most obese I had ever been.

At 245 pounds, I was miserable. I suffered from lower back pain because of all the extra weight, and would constantly get winded from the most minimal physical movement.

It got to the point where I was simply sick of living that way. I had to make the choice to stop blaming my ex-girlfriend – and start take responsibility for my actions. I didn’t want to be overweight and on a breathing machine for the rest of my life.

I decided to make a New Year’s resolution to start exercising and eating healthier.

On January 1, 2002, I started working out at my local gym (treadmill, elliptical, stair machine, weights) 3-4 times per week for the first time in 6 Years – and actually stuck with it. Still, I was frustrated that after a month I had only lost around five pounds.

My Dad gave me some encouragement. He bought me a vinyl sweat suit and a pair of boxing gloves. I punched the bag he had in his exercise room every day for weeks straight.

To make it fun, I pretended I was doing rounds in a boxing match. With that, I really started sweating my fat off!

But I also wanted to work on my diet. The first thing I eliminated was soda – and let me tell you, when you drink three extra-large servings of soda a day, this isn’t easy.

By the spring, my weight was down to 210 and I was feeling great. I decided to also eliminate all fast food and anything fried. I started preparing my own meals at home, and eating salads and sandwiches instead.

Constant junk food cravings (especially my addiction to soda) were an incredibly difficult obstacle that I faced, since my body was so used to them.

When I became present to how I felt and looked 35 pounds lighter at this point, I fought with everything I had inside me to keep going, because I never wanted to be obese again.

For motivation, I put up photos of myself when I was 245 pounds all over my bedroom as a reminder that if I don’t gets my ass moving more and eating less, I will end up looking like that again. Needless to say, it worked! 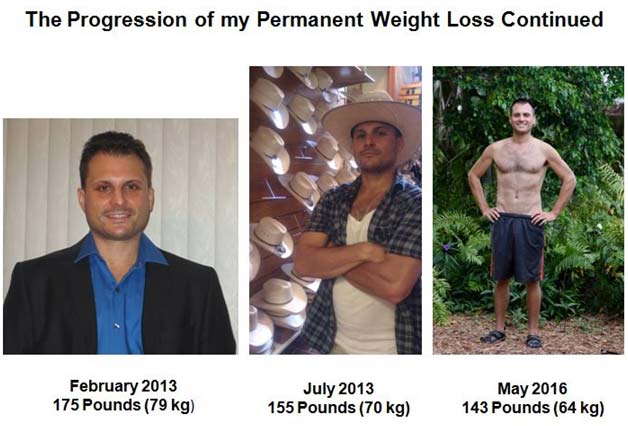 With the weather warming up in Chicago, I also decided to take my workout outdoors.

I started going on forty-mile bike rides at least three times a week, and hiking in the local forest preserve.

At this point, I decreased the CPAP machine usage to four times per week, and within a two-month period, got it down to two times per week. I was happy to find I was still sleeping soundly.

By August 2002, I weighed in at 180 pounds. The excitement was overflowing – I looked, and felt, like a new person.

I kept up with the exercise routine, while continuing to learn about nutrition and holistic health.

I educated myself by reading as many books and articles as I could possibly get my eyes in front of. I became a healthy living researchoholic and immersed myself in anything and everything related to my transformation journey.

And I took my diet one step further and gave up all sweets and processed foods.

By early autumn of 2002, I was down to 170 pounds. In October, I decided to stop using the CPAP machine all together.

And when I went for a follow-up exam in November, the doctor said not only was my blood pressure normal, but my sleep apnea had completely subsided as well. I was ecstatic.

To this day, 15 years later, I no longer have any issues with sleep.

Where I Am Today – Sharing the Love; Reversing Obesity and Disease

For over 10 years, I stayed at 170 pounds. But after moving to Florida in 2013 with my amazing wife, I took up all kinds of water sports and more bike riding, thanks to the warm climate. Over the course of five months, I ended up losing another 30 pounds.

I have a huge passion to now help others struggling with health and weight loss, and I became a certified health coach, and I even wrote a book about my experience called Transformative Nutrition: The Ultimate Guide to Healthy and Balanced Living.