What Causes Metallic Taste during Pregnancy?

The reason behind this occurrence has not been explicitly explained. However, there are several theories that could possibly explain the occurrence of such condition.

1. Fluctuation of Hormone Levels during Pregnancy
During pregnancy, there are hormonal changes that take place. The sensitivity in the senses of smell and taste could primarily be attributed to the fluctuation in estrogen levels. There were several tests conducted by scientists that point out to estrogen fluctuation as the culprit behind the metallic taste experienced during pregnancy.

Furthermore, there are also several studies that pointed out that even women who are not pregnant but have high estrogen levels in the body experience altered smell as well as taste senses.

Another study conducted in 2002, revealed that women in the reproductive age have more sensitive sense of smell than men. However, when estrogen levels are within normal range, the smell sensitivity between men and women are at par.

Moreover, they also found out that women experience increase in sensory experiences during menstruation and during ovulation, which are as well stages when estrogen levels fluctuate. 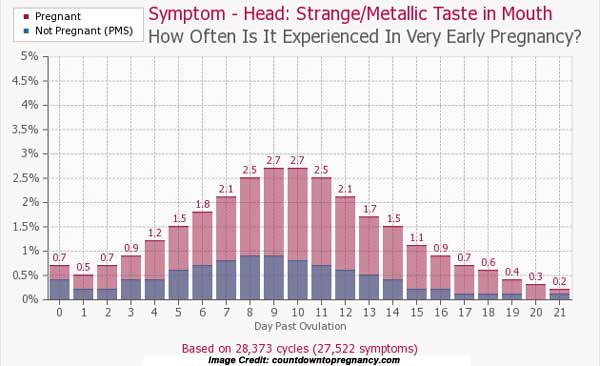 2. Natural Phenomenon during Pregnancy to Protect Fetus From Toxins
Another theory proposed was that this is a natural phenomenon during pregnancy, and that this happens to protect the unborn fetus. At this stage, the first trimester, the fetus is still vulnerable because his or her organs are not yet fully developed. When the pregnant mother has heightened sense of smell and taste, she is more prone to development of morning sickness and its more serious form known as hyperemesis gravidarum. This condition protects the unborn fetus because the mother’s sensitivity to smell and taste will make it easier for her to reject potentially harmful foods. There are foods that contain toxins which can be tolerated by adults, but can be harmful for the unborn fetus, especially during the first trimester.

Scientists support this argument by providing evidences that show that pregnant women develop more sensitivity to taste of cigarettes, liquor, and others. Drinks that also contain artificial sweeteners leave a nasty after taste. This can also be backed by the Tesco Research Study where pregnant women were invited to a wine tasting. These women were tasked to swirl the wine around their mouth and taste it before spitting it out. This is because their chief wine taster observed that she had more pronounced gustatory sense when she was pregnant.

Moreover, several studies also show that women who experience morning sickness are least likely to suffer miscarriage, which can suggest that altered senses during pregnancy really occur to protect the unborn fetus.

How Frequent is Dysgeusia among Pregnant Women?

Dysgeusia is not commonly discussed. However, it commonly occurs among pregnant women. Like other conditions that occur during pregnancy, it should fade away when the hormonal fluctuations begin to gradually normalize, usually during the second trimester.

What Can Be Done When Dysgeusia is experienced?

Dysgeusia can neither be prevented nor can it be treated. However, the metallic taste can be reduced with the help of several home remedies. These home remedies include the following:

Must Watch – Dysgeusia: Treatment and Symptoms