Linea Nigra during Pregnancy: Why Does it Appear 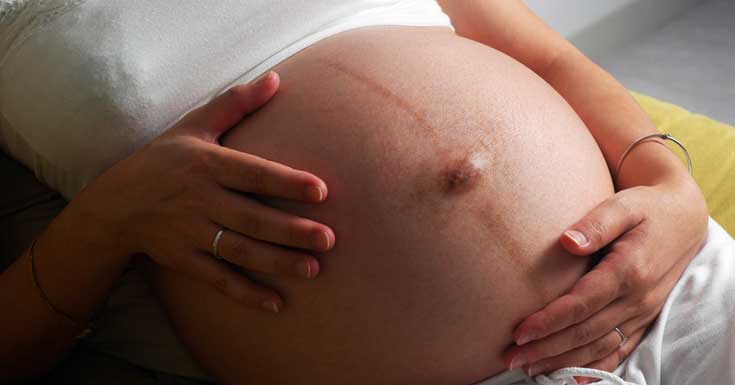 Every woman has a pale, vertical line that begins at the belly button running down to the abdomen. This line is called linea alba. During pregnancy, the linea alba becomes more prominent and changes in color. This is thereby termed as Linea Nigra.

The term “Linea Nigra”, literally means “Black line”. However, despite its name, the line is not at all black in color. It appears brownish and darker than the normal skin tone of the pregnant woman. Because of this it becomes visible or prominent. It usually measures approximately 0.25 to 0.50 inches wide stretching from below the rib cage or from the belly button to the pubis.

Old folks state that if the line begins at the belly button, the woman will bear a baby girl. On the other hand, if it begins at the bottom of the rib cage, the pregnant woman is expecting a baby boy. Another belief says that only women bearing baby boys have this line. However, these are merely myths old folks used to believe in.

During pregnancy, hormonal changes, particularly increase in estrogen, causes hyperpigmentation. Thus, there is an increase in the production of melanin, the pigment responsible for a darker skin. The reason behind the location of the linea nigra has no concrete explanation yet. However, the same reason causes the darkening of the areolas and clitoris during pregnancy.

When Does Linea Nigra Start to Appear?

The Linea Nigra can begin to appear as early as the end of the first trimester, or during the second trimester. Those pregnant women who are expecting twins or triplets may begin to notice the discoloration early in the first trimester. This is because of the presence of more hormones compared to single pregnancies. Furthermore, it is also normal to notice that as the pregnancy progresses the line becomes darker.

What Risk Factors Contribute to a More Pronounced Linea Nigra?

Majority of the women develop linea nigra. However, the extent of discoloration varies. Women who belong to either of the following conditions are more likely to develop darker linea nigras than those who do not qualify:

Will Linea Nigra Have any Harmful Effect Towards the Pregnancy?

Linea nigra is not at all harmful to the pregnant woman and her baby. Actually, it is a sign that the pregnancy hormones are working as efficiently as they should.

Will the Discoloration Disappear?

Like chloasma, the discoloration caused by linea nigra will eventually fade away. However, it may take a long time for it to vanish completely, especially when the mother chooses to breastfeed. Furthermore, sun exposure, can cause it to darken again, thereby reversing the progress made.

Can Linea Nigra be prevented?

The development of linea nigra during pregnancy is considered to be a natural phenomenon. Therefore, there is no way to prevent such from occurring. However, there are measures that can be taken to minimize the discoloration if it seems bothersome to the pregnant woman.

Must Watch – What is Linea Nigra?

How Can the Discoloration be minimized?

There are a few ways to keep the discoloration to a minimum. These measures include the following:

When Should the Pregnant Woman Call Her Healthcare Provider?

It is important for a pregnant woman to consult her healthcare provider whenever she has concerns about her pregnancy. However, linea nigra is not at all harmful, and treatment is unnecessary. The best regimen is a healthy diet and time. The line will begin to fade away as soon as the baby is born.