Fetal Development: Stages of Baby Growth in the Womb 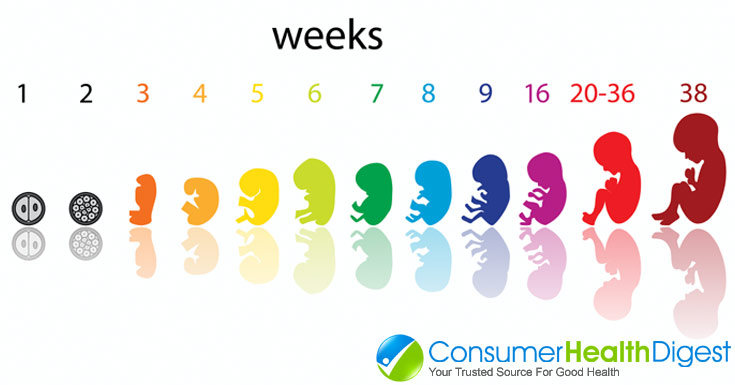 When pregnancy becomes official, not only mothers experience rapid bodily changes, suffer the notorious symptoms and endure the emotional rollercoaster ride associated with pregnancy, but much more to the developing baby. The baby undergoes a drastic evolution that is, from reptilian look to humanoid. This article is a rough guide to moms-to-be about how a baby is growing in a mother’s womb week by week.

The Earliest Days of Fetal Development

Before delving into the monthly and weekly fetal development, here’s a primer on conception:
When the man ejaculates, the semen — which contains millions of sperm cells — is deposited into the vagina. They travel through the cervix and stand by for the woman’s egg cell. When they meet, fertilization happens. The fertilized ovum is called a zygote – the earliest form of a baby. The zygote contains DNA or genetic information that comes from the parents – half of it from the mother and the rest from the father. At this period, the zygote turns into a blastocyte which go through a series of cell division resulting in a group of cells with an inner shell (embryo) and outer shell (fetal membrane). The blastocyte will then be implanted into the uterine wall approximately 6 days after conception. After differentiation occurs, the blastocyte is now referred to as embryo.

Fetal development is divided into two periods — the embryonic period which takes place between 5 and 10 weeks, and the fetal period which occurs between 11 and 42 weeks. The fetal period is when the placenta replaces the yolk sack in providing nourishment to the baby.

Tracking fetal growth and development is an exciting activity. Learn about the physiologic changes and activities of the baby while he/she is in the womb and get expert advice on how to endure safe pregnancy.