Arthritis is a degenerative disease of the joints that is very common in domestic dogs. Older dogs are more likely to develop the disease although younger genetically predisposed dogs may also be affected. In the early stages of the disease, the symptoms are usually mild and go unnoticed by the owner.
However, as the disease slowly progresses, dog owners may notice some behavioral changes in their pets and start to worry. While arthritis is, unfortunately, an irreversible condition, there are some things you could do to slow down disease progression and help your dog feel better.
The earlier you start treatment, the greater the chances of your dog keeping his mobility in old age. If you believe your dog may be suffering from arthritis joint pain, here are the signs to look out for.

At first, your dog may become more reluctant to move about or even rise out of bed. The slowing down which is a normal part of aging may go unnoticed by most owners as a sign their dog is simply tired.
Because most owners would expect their dogs to give themselves away from that they’re in pain by making noises, this is usually not the case in the initial stages of the disease.
Instead, if your dog is becoming more and more reluctant to move, then this could be the first tell-tale sign of arthritis according to one study which found that 80% of dogs with polyarthritis presented reluctance to move as their main symptom.
Older dogs are also more likely to develop the disease in the first half of their lives and start showing symptoms as they age.

If your pet’s gait seems stiff, especially after standing up from a long rest, then he/she may be suffering arthritis joint pain. intermittent lameness and a bunny-hopping gait could indicate either that your dog was injured or has developed arthritis.
However, lameness is usually present in advanced stages of the disease and most owners will know by this stage that their dog has developed arthritis. Only in rare instances where a dog develops rheumatoid arthritis, lameness can happen suddenly and be accompanied by fever and loss of appetite. Rheumatoid arthritis is more common in the small breed and toy dogs than larger breeds. 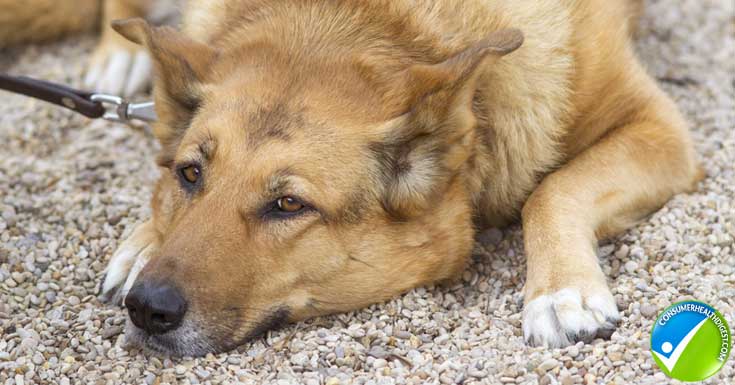 Arthritis in dogs is in most cases a result of age-related wear and tear of the joints. As joint cartilage begins to wear away, the cells in the joints begin to release enzymes that cause inflammation in the joints and build-up of fluid. When this happens, you can feel for tenderness and warmth around the affected joint.
Your dog may also move his leg away from you as you try to touch him due to pain. As the cartilage continues to degenerate, bony growths may appear in the joint area and lead to joint stiffness which is the case in osteoarthritis. The joints may also become visibly deformed.

Because your dog may be more reluctant to move and disinterested in his usual activities, he/she may start gaining weight as a result. However, weight gain may make your dog’s arthritis pain even worse by putting additional strain on already damaged joints.
This is why weight management is frequently recommended in the treatment of arthritis in dogs. Reducing the amount of food you give your dog and watching what he/she eats is important to keep weight at optimal levels.
You may also need to motivate your dog to do exercises not only to prevent weight gain but also to keep the muscles toned in order to prevent further damage to the joints.

Your once calm and poise dog may become more irritable and aggressive once arthritis kicks in. Because your dog is in pain, he may react with aggression when you try to touch him. Just like humans, dogs can become cranky when sick and in pain. Your dog may also become depressed and disinterested in interacting with your or his surroundings.
It may seem like your dog is missing out on life and you may probably wonder how you could help your dog get the best of his life. A veterinarian will give you detailed guideless on how to treat your dog’s arthritis pain with medications, diet, massage therapy, and exercises.

Just like humans, dogs are not immune to the wear and tear of the body which is part of normal aging. Arthritis is a common disorder affecting aged dogs, but larger breeds seem to be more susceptible to the disorder than toy dogs.
Watching for the first tell-tale signs of arthritis such as gait changes and reluctance to move is a good way to tell your dog has arthritis and to start treatment early on. Because arthritis is irreversible, treatment mostly focuses on slowing down disease progression and treating the pain.