What Is The Average Age Of The Woman During Menopausal Period?

Menopause is not a period; of time menopause is a point in time. Menopause is the point when a woman has had no menstrual cycles for a full 12 months or one year. and the Average Age of menopause is 50 years, age between 45 years to 55 years.

Perimenopause, the period leading up to menopause, and postmenopause, are periods of time; perimenopause can last from as little as a few months or for years. Postmenopause is the period beginning after your periods have ceased for one full year, and it lasts the rest of your life. In the western world, most women experience menopause at age 51 or 51.5. Every woman is different, and the age at which she experiences menopause can differ widely from the norm. Early menopause has occurred in women as young as thirty-five while other women are in their late fifties to early sixties before they reach menopause.

Factors affecting the average age a woman reaches the menopause point are varied, but the primary factor is her mother’s age when she made the transition. Other factors include smoking, chemotherapy, any surgeries on the ovaries, and ethnicity. In the eastern part of the world, the average age of menopause is later for Japanese or Chinese women while Hispanic or African-American women reach it earlier than their Caucasian counterparts.

Smoking is a primary cause of early, or earlier than expected, menopause. Smoking damages ovarian tissue, reducing the ovaries’ capacity for hormone production and cutting fertility short. Chemotherapy comes in a close second, as almost all chemotherapies, whatever the cancer they are treating, damage the ovaries as well. Ovarian surgery always results in a loss of tissue; this reduces the ovaries’ ability to produce hormones and may damage eggs as well. A woman is born with all the eggs she will ever have, and these three factors may result in the loss of viable eggs, with no replacements. 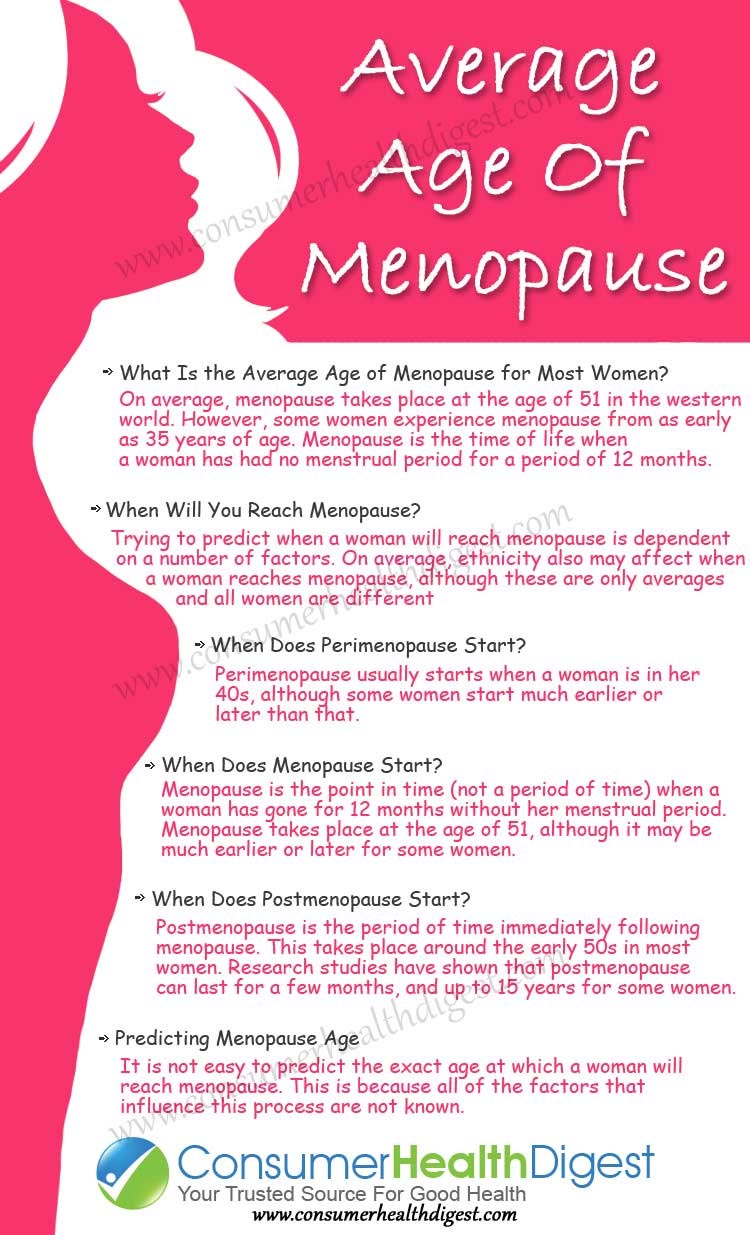 How long do the symptoms of perimenopause last?

The average perimenopause length is four years. However, in some women, this period may last for few months or go on for about ten years. This period ends when a woman undergoes 12 consecutive months without experiencing monthly periods.

When is the earliest age of menopause?

In USA, the Average Age of Menopause is 51 years. However, some ailments or genetic inheritance may decrease this age up to 40 years. If it occurs before this stage, it’s called premature menopause and it’s contributed by various factors, including the health.

Every woman experiences menopause at a different age. However, to deal with menopause symptoms, one should prepare with a remedy.