Pregnancy During Menopause – Is It Possible?

Is it possible to get Pregnant in menopausal?

The Truth About Pregnancy During Perimenopause 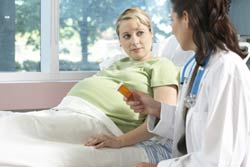 Perimenopause often occurs approximately 4 years before the onset of menopause. Women start experiencing menopausal symptoms during this time, and their menstrual periods may become erratic. Most women assume that they are not fertile anymore during this time, and stop whatever birth control methods they have been using. However, they still run the risk of falling pregnant because their bodies are still releasing fertile eggs, albeit a little less than before the perimenopausal stage. During this time a woman has to take precautions to ensure that she prevents pregnancy. Certain birth control methods can help ease severe perimenopausal symptoms which may be affecting a woman’s quality of life.

Pregnancy symptoms affect women as a result of higher hormonal levels. Menopause, on the other hand, affects women as a result of the exact opposite situation – lower hormonal levels. In each case however, there is a hormonal imbalance which brings about changes in mood, menstruation, mental and emotional health. Women over the age of 40 who fall pregnant sometimes assume that they are experiencing menopausal symptoms when their menstrual period stops. Changes in mood and body temperature can also be mistakenly associated with menopause rather than pregnancy. Hence, it is important to get medical advice before taking any medication to alleviate menopausal symptoms, as these could actually be pregnancy symptoms.

What are the Risks of Pregnancy During Perimenopause?

If a woman would like to get pregnant during perimenopause, there are several factors that she needs to take into consideration. Firstly, although her body is still fertile and likely to be producing eggs, there is less chance of conception because her eggs are older. The chances of conceiving a baby are also low because her menstrual cycle often becomes irregular. If she does fall pregnant, both her and her baby may be at risk of certain health issues. Women who conceive after 40 years of age have a 1 in 100 chance of giving birth to a baby with Down’s syndrome. This increases to a 1 in 10 chance after the age of 50. There are also a number of other birth defects that could affect the baby, as well as a high incidence of still births or miscarriages. The mother also places herself at risk from high blood pressure and diabetes.

Also Read – Lose Weight In Menopause If You Are Hypothyroid

Why Pregnancy After Menopause is no Longer Possible?

Birth control during menopause is not optional, especially if there has been a menstrual period within the last twelve months or blood tests to confirm the end of menopause have not been done. The choice of which birth control method to use during menopause is influenced by a number of factors. A woman may have been using a particular contraceptive before menopause, and prefers to continue using this method. The choice may also be influenced by health concerns because certain chronic medications cannot be used with oral contraceptives. The doctor may prescribe a contraceptive with a lower hormonal count or one that supports the woman’s hormonal imbalance. A woman going through menopause has basically the same birth control options as any other woman, namely oral contraceptives like the pill, contraceptive injections and patches, intra-uterine devices and permanent methods like sterilization.

What Should I Know about Menopause and Pregnancy?

As a woman, it is important to always take precautions against pregnancy even during the menopausal stage. The body still has relatively significant levels of estrogen and progesterone during this time, making the woman’s body fertile enough to fall pregnant. Although these levels may rise and fall randomly during menopause, contraceptives should still be used throughout the menopausal stage. Once menopause has ended, it is safe to stop using contraceptives once a doctor has confirmed this. Even if a woman has not had her menstrual period for a while, she may still be at risk of falling pregnant unless her doctor confirms otherwise. If a woman would like to fall pregnant during that time, however, it is critical that she has constant medical observation in order to alleviate or lessen the risk for her and her baby.

How to Prevent Pregnancy after Menopause?

In order to prevent pregnancy after menopause, a woman should have a blood test run by her doctor to confirm that her ovaries are not releasing any eggs. This test will usually be run once menopause has come to an end and the woman has not had a period for at least 12 consecutive months. Without this test, a woman may assume that she has reached the end of menopause, and may run the risk of falling pregnant. It is critical to have a doctor run the blood test, known as the Follicle-Stimulating Hormone (FSH), because this test confirms that menopause has undeniably come to an end and there is nothing in the woman’s body left to fertilize. Once this has been confirmed by a doctor, the woman can safely stop using contraceptives.

Read Next – Lose Weight During Menopause
View All