Do you want to increase your sex drive? Try out these 7 powerful yoga poses to help men improve their sex and physical stamina.

When we read about problems men are experiencing in the bedroom, publications usually include erectile dysfunction, a low sex drive and certain problems with ejaculation, such as premature ejaculation, as the primary concerns that men face during sex. While these are all very important to consider as they do tend to cause havoc on a man’s sex life and even on his mental health, causing him to develop performance anxiety and feel more self-conscious during sexual activity, many of these publications tend to leave out the fact that these particular sexual dysfunctions are not the only factors that can affect a man’s sexual performance.

In addition to considering potential sexual dysfunctions from reducing a man’s ability to perform well during sex and offer a great deal of pleasure to his partner, it is very important to consider other problems as well that may not be directly related to sex, but still have a significantly important role to play in his ability to have good sex. In this post, we want to focus particularly on low stamina levels during sex, a condition that is often overlooked, yet tends to cause sex to end quickly as the man runs out of stamina to continue.

Our focus in this article is to provide our readers with an overview of how yoga can improve their sex lives. It is already well-known that yoga has a vast variety of benefits for the human body, ranging from a reduction in stress and alleviation of pain to a stronger and fitter body. Yoga is also especially useful for men who are experiencing problems in the bedroom – many poses have been deemed power yoga for men as they can boost the man’s abilities in different ways.

What Are The Yoga Poses For Good Sex Drive?

Even though we are going to take a look at how yoga can improve sexual stamina, we should make a quick note of the fact that yoga is also good for improving a person’s sex drive, which refers to a lack of sexual desire. There are many different yoga poses that are excellent for boosting a man’s sex drive – many of the yoga poses we will be discussing in this article is also useful. We will note whenever a pose will offer an increase in both stamina and sex drive.

Which Is The Best Yoga Position For Sex?

Yoga has been utilized for improved sexual performance since ancient times. This exercise offers the body a workout by utilizing the body’s weight as resistance thus causing a calorie reduction and an increase in muscle mass. There are quite a large number of different yoga poses that can be performed – each with its own set of benefits. For this reason, it is important to first consider what aspects of a man or woman’s sexual abilities need to be improved before a particular yoga pose can be utilized. For example, a pose that could enhance erectile function may not be useful for controlling ejaculation thus particular sexual problems have specific yoga poses that is most beneficial.

Stamina is not only important for conducting day-to-day activities and attending a gym but is also an essential part of sex. Without an adequate level of stamina, a person would not be able to perform well during sex. They would become tired too quickly thus causing them to be unable to continue having sex – this often leads to their desire to continue with sex going away, as well as their erection becoming limb. Let’s consider some of the most effective to utilize yoga for physical stamina by looking at different poses that are known to boost energy and stamina levels. 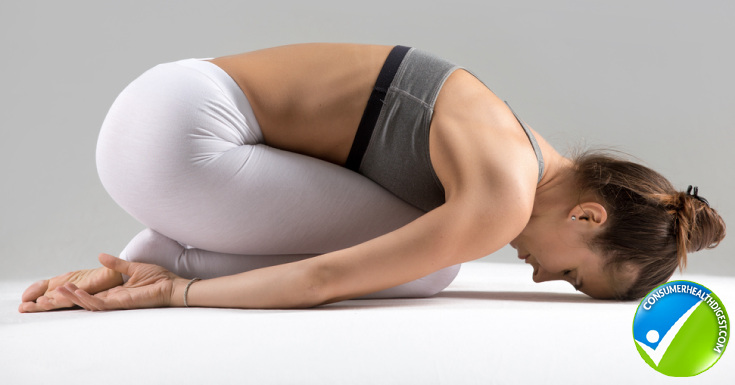 The “Child” pose is a relaxing pose that can be held for extended periods of time. It is often utilized between a series of poses that requires you to stand up, as a way to calm the body down and allow the body to rest. Do You Yoga explains that this particular yoga pose is excellent for calming down the mind and the body, and it is an excellent pose for improving the digestive system. By also stretching the hips and the back, as well as relieving stress, this pose is able to offer a considerable boost in both mental and physical energy levels. 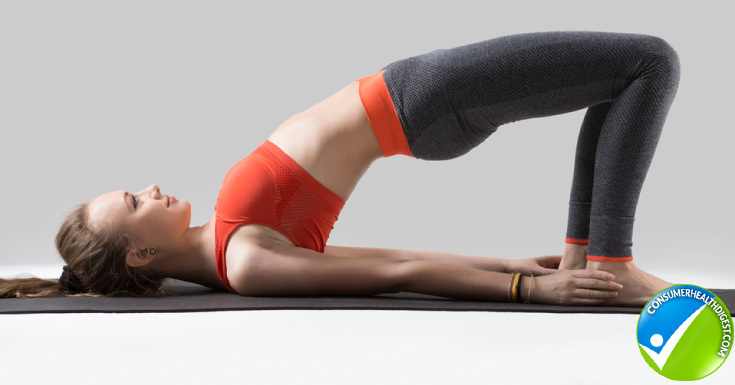 The “Bridge” pose is also known as the Setu Bandhasana. CNY Healing Arts explains that this pose is useful for relaxing the central nervous system, as well as the brain, and to improve the function of the digestive system (better digestion means more energy). It also helps to boost blood circulation and stimulate the organs in the abdominal area. The “Bridge” pose is also good for fighting against depression. It also gives the hips, the neck, chest and spine a good stretch. Ultimately, the “Bridge” pose is an excellent example of how to use yoga for sex stamina. 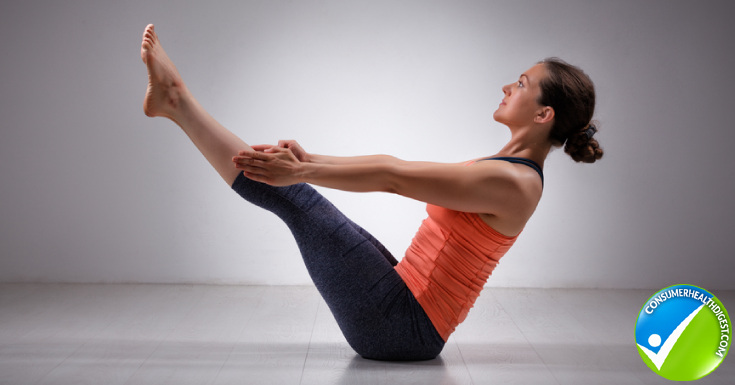 This pose is also beneficial for increasing sexual stamina. It is known to increase the strength of the hips, the spine, and the entire abdominal region. The “Boat” pose is also good for relieving stress, which is a major contributor to both mental and physical fatigue. This pose also aids in improving digestion. Furthermore, the “Boat” pose, according to Yoga Journal, is good for stimulating the intestines, the prostate gland, the thyroid and the kidneys. 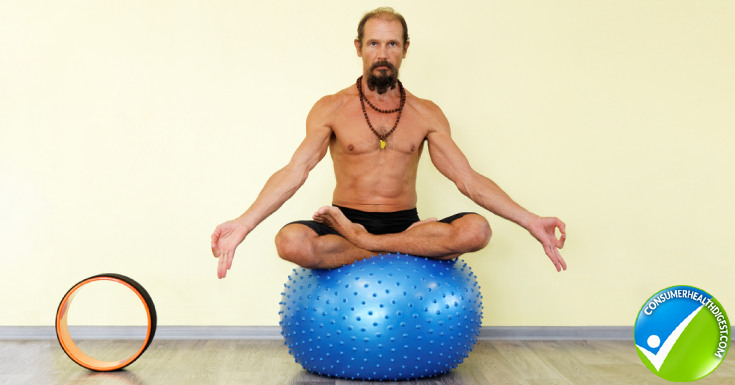 Also known as the Padmasana, the “Lotus” pose is good for various ailments, including low sexual stamina. The pose may be somewhat difficult for beginners but can be easily mastered with some training. Style Craze explains that the “Lotus” pose activates the abdominal area, the bladder and the spine, while stretching the ankles and the knees. The pose is also good for improving flexibility and for practicing mindfulness, an essential strategy that is also known to increase energy flow in the body. 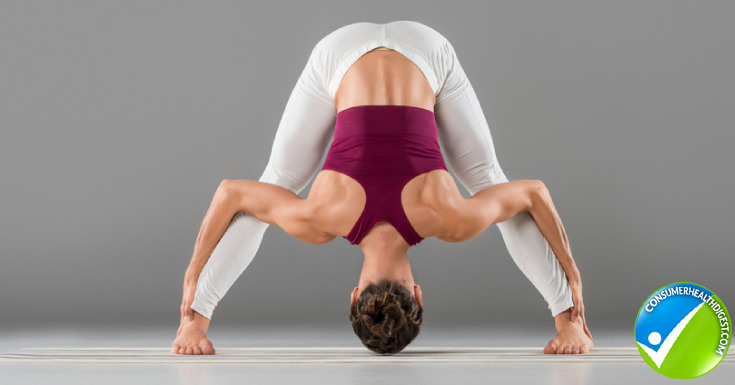 The “Straddle” pose is another excellent way to use yoga for stamina, offering a reduction in stress levels, causing fatigue to disappear and energy levels to rise. Anamaya Resort explains that the “Straddle” pose also helps to improve the function of organs in the abdomen, relaxes the entire pelvic region and strengthens the spine. Note that this pose is also sometimes called the “Seated Wide Legged Straddle” pose. 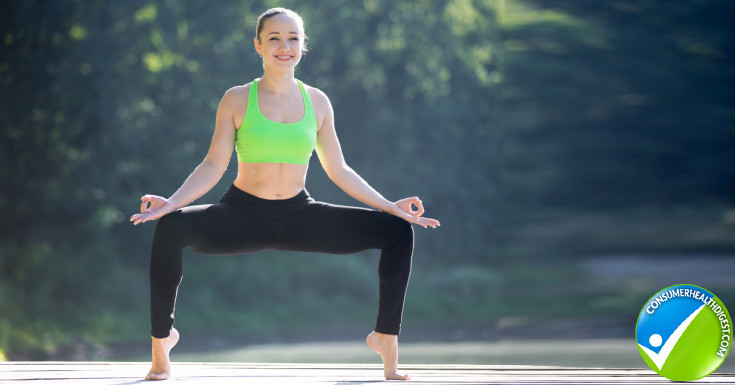 The “Goddess” pose is a type of squat that is named after the fact that it encourages the feeling of empowerment and confidence. It is often said to be especially useful amongst women, but men care surely also benefit from the pose. The “Goddess” pose strengthens various areas in the body, including the core, the upper back and arms, the shoulders, calves, quadriceps, and the inner thighs. Furthermore, it is one of the most effective poses to utilize when energy and stamina levels become low. 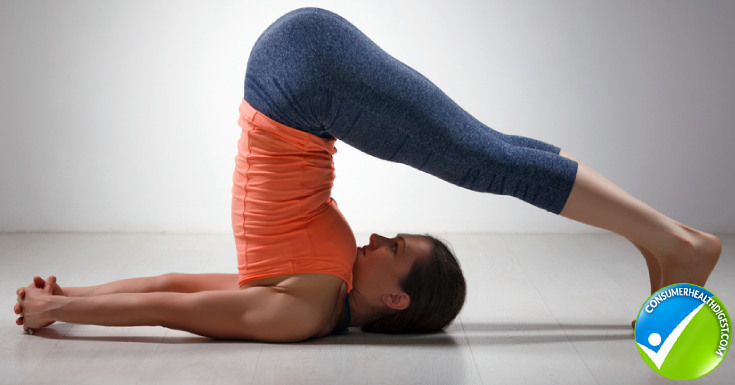 This pose is called the Halasana as well, and is perfect for those noticing stress is causing them to feel excessively tired, especially at night when their partner might expect sex. The “Plow” pose does not only calms down the brain but also relieves stress throughout the body. It stretches the spine, relieves fatigue, and also activates the organs in the abdominal area. 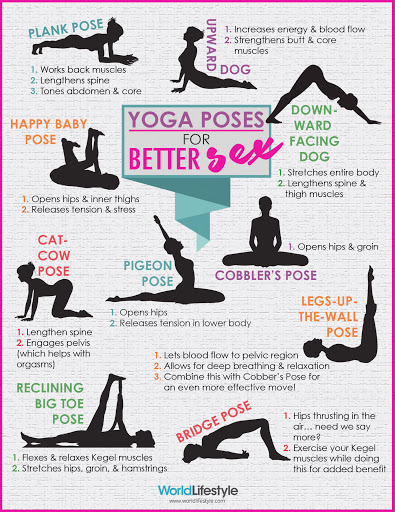 Yoga has long been used by people to aid in enhancing their overall well-being and even to assist them in fighting against some common health concerns and diseases. When it comes to sexual health, yoga is especially helpful as this exercise teaches mindfulness, boosts circulation, enhances the strength of the pelvic floor muscles, and gives a person much greater confidence in themselves.

If you are looking to utilize yoga for physical stamina, then be sure to try some of the poses we have shared here to get a feeling of how this exercise can help you out in the bedroom.

Combine some best sex pills similar to Nugenix with yoga that will help to increase endurance levels while boosting energy.