Urethritis: Diagnosis and Treatments for Urethritis After Analyzing the Cases

Urethritis is a urethral inflammation that is caused by infection with bacteria. The major symptoms are burning, pain, urinating agency, and blood in the urine.
Evan Jensen, CPT

Urethritis is a medical condition characterized by the inflammation of the urethra. The urethra refers to the tube carrying urine coming from the bladder out to the body. 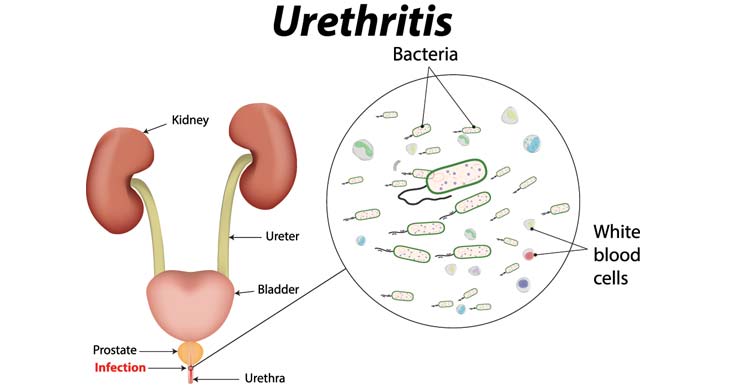 Most issues of urethritis are often caused mainly by bacteria infection. The bacteria enter the urethra through the skin surrounding its opening. Among the most common bacteria that cause urethra are bacteria causing sexually transmitted diseases, such as Gonorrhoea and Chlamydia. These infections are typically stuck to the urethra, but they can also be transferred to the reproductive organs of women, which in turn cause pelvic inflammatory diseases (PID). On the other hand, among men, these diseases may also lead to epididymitis. PID and epididymitis disorders may lead to infertility in both genders.

Other causes of urethritis also include injury, as well as sensitivity to chemicals that are often used in spermicides, as well as creams, foams, or contraceptive jellies. Also, germs that cause urinary tract infections, E.coli, can also cause urethritis.

What are the Symptoms of Urethritis?

The main symptom of urethritis is pain during urination or dysuria. On top of that, the sufferer may also experience urgent or frequent need to urinate, or difficulty in starting urination. Urethritis may also cause pain, itching, or other forms of discomfort even when not urinating.

Other symptoms may also include feeling discomfort and pain during sex, discharge from the vagina or urethral opening among women, and blood in urine or semen among men.

How To Diagnosis Urethritis?

It is possible to receive a diagnosis of urethritis when the doctor reviews your medical history and inquires about your symptoms. If you experience pain during urination, the doctor may instantly assume the presence of infection. As a result, you may be prescribed antibiotics while waiting for the results of the tests conducted.

Laboratory tests may help in confirming the diagnosis of urethritis as well as its cause. The tests for urethritis may include physical examination, especially on the abdomen, rectum, and genitals. Urine tests are also conducted to check for bacteria or signs of Chlamydia, or Gonorrhea. Any discharge may also be examined using a microscope. At this point, blood tests may not be necessary in order to diagnose urethritis, but your doctor may ask for it depending on the situation.

As of this point, it is vital to understand the goals of the treatment. This includes the elimination of the root cause of the infection, improving the symptoms, as well as prevention of the potential spread of infection.

Urethritis which may due to trichomonas infection, which is often called trichomoniasis is generally cured with a specific antibiotic is called Flagyl or metronidazole. On the other hand, Tindamax or tinidazole is another type of antibiotic that can also treat trichomoniasis.

Urethritis that is caused by herpes virus is often treated with:

Most of the time, the specific organism that causes urethritis may not be really identified. During these specific situations, doctors may prescribe at least one or more antibiotics that may cure any type of infection which may be present.

Men who have urethritis are often at risk of some complications, including cystitis, or bladder infection, epididymitis, orchitis, or infection of the testicles, as well as prostatitis or infection of the prostate. If a severe infection occurs, the urethra may be scarred, and eventually narrowed. This is referred to as a urethral stricture.

Urethritis, in general, may not only occur in men. It can also happen in women. Most of the time, urethritis among women has been passed on to them by their sexual partners. Urethritis among women causes pain in the urethra, making it very uncomfortable for them to urinate, and may experience discharges. The same treatment, that is, the use of antibiotics will be prescribed by the doctor to women who are suffering from urethritis.

A certain man noticed a slight burning sensation in his penis accompanied by discharges in the morning. Those were just the initial symptoms, but after going to the doctor and conducting more laboratory tests, it was found out that he is going through the earlier stage of urethritis. The doctor had earlier prescribed antibiotics which treated the uncomfortable sensations. When the infection was cleared out, the man resolved to practice safe sex and good hygiene. When he went for another check months after, his urethritis was already gone, though he had to maintain some more medications.

An anonymous man also reported experiencing the symptoms of urethritis. He became aware of it after searching for the symptoms online. He went to the doctor right away to have it treated. As the man suggested, early detection is very important. Antibiotics did the trick for him, and he was also advised by his doctor how he can avoid it.