Although the science and biological mechanics of Kegel exercises may be too complicated for most of us to understand, these exercises are typically associated with two elements of male physiology – improved endurance during sex and larger penile erections during physical arousal. Kegel exercises have gained increasing popularity over the last few decades, due in large part to an increased emphasis placed upon sexual health and performance in major media outlets. Using these simple, discreet exercises, men can gradually reduce unwanted occurrences of premature ejaculation while enlarging the size of their erect penis. 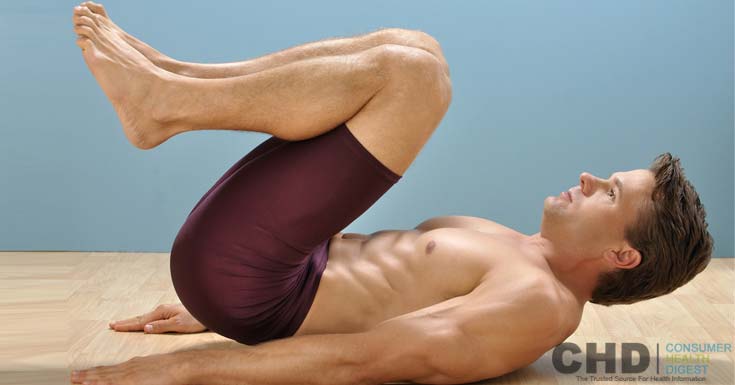 Although the merits of penis size do not necessarily ensure increased pleasure for women during sex, they may help alleviate any insecurities and worries experienced by individuals who are unsure of their ability to “perform” during sex. Sexual Performance insecurities are some of the most common issues that sex therapists confront in both individuals and couples. Fortunately, small actions, such as Kegel exercises,or male enhancement product like Virectin can empower individuals to take charge of their sex life and feel better about themselves and their relationship.

You can use the information provided below to learn more about Kegel exercises and how you may be able to incorporate them into your own daily routine. Although these exercises are often considered to be simple additions to a daily routine, you should consult with your doctor if, at any time, you begin experienced unexpected pains or soreness. 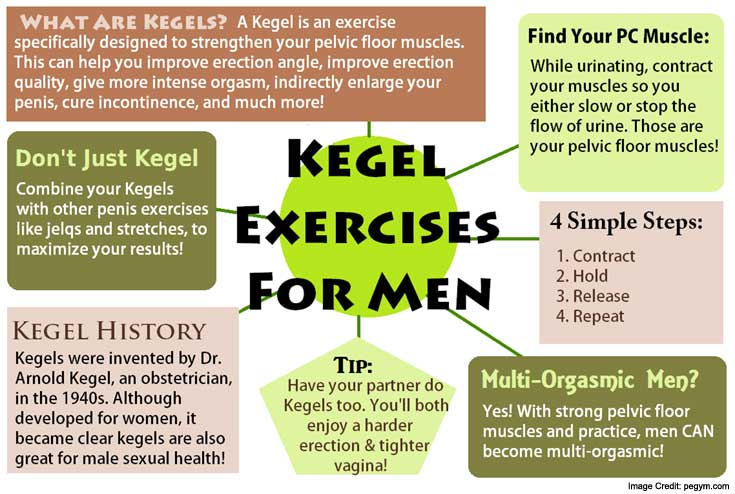 Kegel exercises work by stimulating muscles in the pelvic region, more specifically the pubococcygeus muscles of the “pelvic floor.” In order to contract these muscles, men must first locate them physiologically. One of the most recommended methods for doing this can be practiced during urination by stopping the flow of urine mid-stream. The motion used to do this is the identical movement men will use during Kegel Exercises. After identifying the target muscle group, men should focus on flexing and relaxing this target group in sets of 10, three times daily. Men should remain tense for five seconds at a time before releasing the tension.

When undertaken on a regular basis, many men will begin seeing and feeling the result of their efforts. That being said, results should not be expected overnight. As with any strength training exercise, the body requires a certain amount of time to rebuild muscle in areas where exercise has occurred. You can supplement this process by eating a protein-rich diet and maintaining a disciplined exercise schedule.

Studies have shown that kegel exercises can greatly increase a man’s stamina during sex, significantly reducing the likelihood of premature ejaculation and allowing men to engage in intimate physical scenarios for extended period of times. The benefits are both physical and psychological, as premature ejaculation as also often been associated with a fear of sexual inadequacy. By diminishing the likelihood of this potentially embarrassing event, men can approach future intimate situations with a degree of confidence and security they have not known previously.

Kegel exercises have been shown to provide a number of health benefits, many of which are related to issues outside of sexual intercourse. One of the most significant health benefits for men is the reduced likelihood of urinary incontinence with age. Ensuring that these muscles remain active and developed throughout life will reduce the effects of muscular degeneration that are unavoidable with age. Additionally, routine Kegel exercises will help a man develop his PC, or Pubococcygeus muscle, which controls the strength of muscle contractions during orgasm and also help reduce the onset of incontinence in older men.

The advantages of Kegel exercises lie primarily in the relatively simple methods through which they can be undertaken. Unlike conventional muscle-building exercise, men can strength their PC muscles and take full advantage of the numerous health and sexual performance benefits of these muscle contractions without leaving their home or bedroom. Kegel exercises can be completed in a relatively short amount of time and also allow for complete privacy. For men who do not wish to share their progress or exercise plan with their partner, they can do so easily when undertaking Kegel Exercises.

Although the majority of younger men do not need Kegel exercises to remain in good physical health, these strength-training exercises become increasingly valuable with age. As with any form of exercise, however, men should always pay close attention to their body, ensuring that they do not damage or overly fatigue their muscles. If any unexpected pains arise, men should consult with their doctor immediately.

As with any sexual health or performance-related issue, an honest discussion with a romantic partner can help clarify any perceived issues pertaining to the relationship for both parties. Men interested in enhancing their sexual performance for the sake of their partner should discuss this with them in order to clarify whether any male enhancement is needed in the first place.