How Juicing Boosts Testosterone Levels For Your Manhood

Juicing For The Manhood is a different approach that includes a step-by-step juicing guide to help men reclaim their manhood and increase testosterone levels.

A poor sex life among men is relatively common in older men, but sometimes it can also be present among younger men. There are many elements that can cause a dip in a man’s sex life – such as health conditions that cause the man to find it nearly impossible to gain a firm erection.

Many different types of sexual disorders also exist, such as erectile dysfunction and premature ejaculation.

All of these factors can affect a man at any stage in his life, causing problems with his sex life and often leading to psychological distress, which may develop into performance anxiety and depression. Juicing For Your Manhood is an online program developed by Olivier Langlois.

The program aims to target the source of all these problems by helping the body produce a normal amount of testosterone, the main hormone in the male body. This is based on the fact that juicing increases manhood.

Testosterone is the main hormone that is known as the source of everything that makes a man. This hormone is produced inside the testes and then signaled by the brain to travel throughout the body.

National Institutes of Health explains that, as testosterone travels through the body, a certain percentage is also converted into estradiol, which is a specific type of estrogen.

As the body ages, it naturally starts to produce a smaller amount of testosterone.

While men experience a peak in testosterone count within their 20s, their body starts to produce an average of 1% less testosterone per year once the man reaches the age of 30.

Sometimes, however, a man’s testosterone production drops at a higher rate, which often leads to a low testosterone count – thus leading to numerous issues arising.

The most common symptom a man experiences, when they have a low amount of testosterone in the body, is erectile dysfunction and a lack of libido.

Sexual dysfunctions aren’t the only problem that may develop if a man has a low testosterone count.

They also report that a lower sex drive, depression, brain fog, memory problems and irritability to be some of the psychological symptoms that develops with low testosterone.

Juicing For Your Manhood 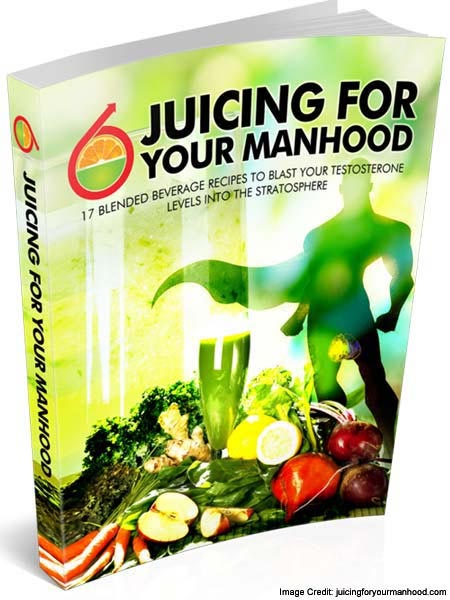 Juicing For Your Manhood

Once a man starts to experience symptoms that are associated with low testosterone, a doctor will usually conduct a test to determine the man’s testosterone count.

Should the testosterone count come back as low, then the doctor will start to recommend treatment options to the patient, which usually includes the consumption of a drug that acts as a testosterone replacement.

Unfortunately, testosterone replacement therapy often causes numerous unwanted side-effects to develop, which may have a negative impact in the man’s life.

Some of the most common side-effects that develop when a man undergoes testosterone replacement therapy include oily skin, acne breakouts, enlargement of their breasts, sleep apnea, a decrease in the size of the testicles and mood swings.

Juicing For Your Manhood is a step-by-step guide, developed by a nutritional coach that has experience in male performance nutrition.

The main focus of this guide is to help individuals who show signs of low testosterone to naturally help their body increase testosterone production through juicing.

The entire program is designed around the idea to consume one juice cocktail on a daily basis, which contains essential ingredients that are helpful to the testosterone production abilities of the male body.

The product will thus help the body reach healthy levels of testosterone, which will relieve symptoms of erectile dysfunction, increase strength and promote the growth of lean muscle mass.

Apart from the step-by-step guide included in this program, Olivier also includes additional bonus parts that are meant to further assist the user with following the program and gaining a better sex life. The additional part included contains juicing rules, blender recommendations and more.

With the drop in testosterone production as the man ages, they are often faced with unpleasant symptoms such as a decrease in strength, loss of muscle mass, and problems with their sex life.

While testosterone replacement therapy exists to help avoid this problem, side-effects are often unpleasant and may interfere with a person’s daily life.

However, juicing increases manhood; Juicing For Your Manhood is an alternative solution that introduces a step-by-step juicing guide to help men claim back their manhood and boost their sexual performance.