Wet Dreams In Men: Facts to Know About Nocturnal Emission

Although we often associate nocturnal emissions, or “wet dreams” with the puberty phase of development in boys, this phenomenon occurs throughout the lifespan of a man. 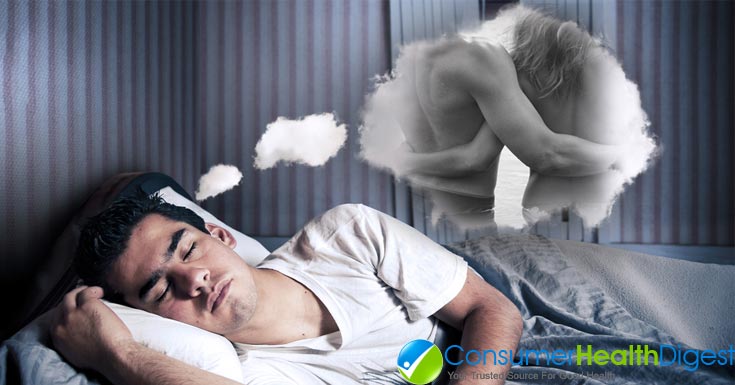 Unfortunately, nocturnal emissions can be a source of embarrassment or confusion for some, particularly for those who don’t understand the fact behind this natural process.

We’ve created this guide to help men better understand exactly what is happening in their body during a nocturnal emission and what they can expect!

Believe it or not, nocturnal emissions can occur in both men and women! A nocturnal emission is commonly defined as an orgasm which involves the ejaculation of semen for men or significant lubrication of the vagina for women.

Although the “results” of a nocturnal emission may be more difficult for women to observe, they are, nevertheless, capable of having them!

A nocturnal emission is considered a “normal” experience for adolescents and teenagers to have, particularly if they are just entering periods of significant sexual maturation and growth.

That being said, young adults are not the only individuals likely to experience a nocturnal emission. Adults of all age have reported experiencing nocturnal emissions, although it is widely believed that the frequency of these occurrences will reduce with aging.

According to recent studies conducted via survey of American males, roughly 83% of those polled reported having experienced a nocturnal emission at least once in their life.

That being said, the average frequency of nocturnal emissions per individual was approximately 0.36 times per week, meaning that those who did report having had an identical experience only did so roughly every three weeks.

It is also interesting to note that nearly 13% of males have reported that their first orgasmic experience occurred during a wet dream.

Although this may come as somewhat of a surprise, there have existed a variety of positive outlooks on nocturnal emissions throughout history in both social and religious groups.

According to both the Muslim and Christian faith, these acts do not contribute to the “pollution” or “impurity” of a man due to the fact that they are not directly created by the individual in question.

That being said, certain passages are present in the Hebrew faith that proclaim nocturnal emissions to be an act of “defilement.” In context, however, the situation becomes less severe, primarily due to the fact that such wordings are also used to describe “normal” orgasms.

Nocturnal Emissions – What You Need To Know

Aside from any shame or embarrassment that men may experience after having a nocturnal emission, particularly if they are in an intimate living and sleeping arrangement with a partner, their exist no physical dangers related to these experiences.

It is difficult to prescribe a “treatment” for men experiencing high numbers of nocturnal emissions, largely due to the fact that this is not considered a medical ailment.

Men who are afraid of negative criticisms and judgments due to their nocturnal emissions are advised to discuss their situation with a loved one, regardless of how awkward or embarrassing this may be.

Only through active discussions can situations such as these be better understood and comprehended by both parties.

For teenagers and adolescents, the presence of nocturnal emissions should at no point be a cause of worry or stress. Instead, these events can be looked upon as a symbol of approaching “manhood.”

Although women may be less aware that they have experienced a nocturnal emission, they should remain as calm as their male counterparts and simply accept these occurrences as a natural part of their life.

See Also – Who Is The Culprit Behind Dry Penis Skin? Know Its Causes & Treatments

Those who are experiencing negative psychological effects due to their nocturnal emissions are advised to consult with a sex therapist, who may be able to help them confront and resolve any issues that exist because of this particular situation.

As with the majority of sex-related issues and worries, an honest and open discussion of the issue at hand remains consistently one of the best “first steps” to further treatment or resolution.