Fact Checkedby Aubrey Destremps Reviewed by CHD TeamUpdated: Jan-29-2023
Looking for the best lip plumper for bigger, fuller lips? Learn how topical lip plumpers actually work and which ones are worth.

The best lip plumpers to get bigger lips instantly. Image via Shutterstock

Full, thick lips is an enviable facial feature. With the likes of celebrities such as Angelina Jolie, Megan Fox, Rihanna, and the Kardashians, it is easy to see why many women want that pouty look. Luckily for them, there are lots of products that offer to help - without the need for surgery or any other lip enhancing cosmetic procedures.

Lip plumpers are said to offer a quick fix, claiming to instantly volumize the lips as soon as you apply them. As usual, let's study this claim in detail and see it if its rooted in reality.

What are Lip Plumpers?

Lip plumpers pertain to cosmetic products that claim to volumize the lips, making them fuller, thicker, and more pouty. They come in many forms, with the most common being balms, gels, gloss, pots, or sticks. These products work via two mechanisms.

The first one, considered the traditional approach, involves an irritation reaction that swells up the lips to make them look bigger. The second mechanism, on the other hand, boost lip size by providing intense moisturization to the lips thus making them smoother, shinier, and seemingly bigger.

Reasons You Need Lip Plumper in Your Life

Wanting to have bigger lips is not something new. The resurgence of such trend, however, can be credited to certain celebrities. For years, the only option was to have filler injections until recently, lip plumpers emerged. Lip plumpers became popular particularly among women due to their ability to increase lip volume without the need for injections.

Aside from being non-invasive, other reasons for their popularity include being relatively inexpensive, readily accessible, and lack of downtime. 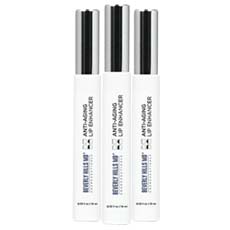 Beverly Hills MD Anti-Aging Lip Enhancer is a natural product which aims to plump up the lips and give them volume. It makes them fuller and smooths out the surface.

The Secret Ingredients Behind Lip Plumpers

Lip plumpers come in many kinds and brands, each one featuring their own blend of ingredients. But the ones commonly found in the most recommended brands include:

Peptides - This popular ingredient in skincare products works to volumize the lips by building its very structure - collagen. It induces the body to synthesize more of this key structural protein (source).

Capsaicin - This compound is what gives chili peppers their spiciness. In lip plumpers, they work by causing localized irritation to the lips in turn causing increased blood flow to the area. Increased blood flow swells up the lips, giving that temporary plumped look. (source)

Bee Venom - It works in the same way as capsicum does. It fools the body into thinking that the lips were stung by a bee, leading to localized irritation and inflammation.

Hyaluronic Acid - This naturally-occurring substance smoothens and plumps up lips by pulling moisture from the environment. It then traps that moisture, effectively preventing its evaporation from the lips. (source)

Do Lip Plumpers Actually Work, and Are They Worth It?

Most lip plumpers work to a certain extent. As mentioned, they contain ingredients that irritate and boost blood flow to the lips, making them a bit red and swollen. This temporary enhancement works for a few hours only. Some stinging or tingling sensation might be felt, indicating that the product is working.

There are also lip plumpers which contain nourishing ingredients. They help make the lips smoother, thus giving them the illusion of plumper appearance. Such effect is also temporary.

How to Choose the Best Lip Plumpers?

The key step to determining which lip plumpers will suit you best is to look at the ingredients. If you wish to use those which causes transient swelling, then do so with caution. Lip plumpers that smoothens the lips to give the volumizing effect are much safer and therefore recommended for those with sensitive skin or have a history of serious allergies (i.e. spicy foods, bee stings). If you're not sure, you can always ask the help of your trusted skin specialist.

Furthermore, it is also advised that you pick a lip plumper containing SPF. The lips are always exposed to the sun and repeated exposure may lead to thinning, which is the complete opposite of what you want to achieve.

Lip plumpers, while they may be effective in increasing the volume of your lips, produce temporary effects only. Those who plan to use these products must be realistic in their expectations. If you're looking for dramatic plumping, don't expect lip plumpers to give you effects that are comparable to that of a $500 filler injections.

Taking your care of your lips is also a must if you want them to look pretty for longer.