Facet Syndrome – A Leading Cause of Lower Back Pain

Lower (LBP) back pain is fairly common, with most people experiencing some form of LBP during their lifetime. The cause of LBP is usually a combination of different factors such as muscle strains, disc degeneration, and a herniated disc.

However, a less talked about but surprisingly common cause of LBP is FS. Facet Syndrome (FS) is a condition in which the origins of back pain are the small joints located in the posterior region of the spine called the facet joints.

Researchers believe that the majority of LBP cases are due to injuries to the facet joints, but diagnosing FS remains difficult. This is because many of the symptoms of FS are similar to those of other spine diseases and spine injuries. Other than that, diagnosing FS can be difficult due to a lack of reliable diagnostic tools.

Can Facet Syndrome Cause Lower Back Pain?

Facet joint disorders are some of the most common of all the recurrent, disabling low back and neck conditions. It can cause serious signs and symptoms and can even disable the patient.

It’s a condition that causes back pains from the origins of the back and joints, hence FS can cause LBP.

What is Facet Syndrome?

It’s a joint condition that causes pain at the joint origins between two vertebrae in your spine. It’s also known as osteoarthritis. Facets are the joints in the spine that make you’re back flexible thus enabling you to bend and twist.

The Prevalence of Back Pain

LBP is the most common pain symptom experienced by US adults and a very common reason for primary care visits. According to a National Institute of Health Statistics survey, LBP accounts for 27% of all cases of pain in the US.

Because the lower spine has many regions that can cause pain, finding the exact cause of LBP can be difficult. In general, medical experts recognize that LBP is mostly caused by a combination of different factors. However, some studies estimate that between 15-52% of LBP cases are a result of injury to the facet joints specifically, thus causing facet joint pain.

Conversely, some studies also suggest that the prevalence of isolated facet joint pain could be as low as 4%. The wide gap between these estimates has made FS a controversial subject in the medical community.

The History of Facet Syndrome

The facet joints have been recognized as the potential source of LBP ever since Joel Goldthwait described facet joint pain in 1911. Later, in 1933, Ghormely coined the term facet syndrome to describe pain located in the lower spine region, with or without sciatica that most likely occurred after back strains.

But it was not until Eubanks and colleagues found ample evidence by examining cadaver lumbar spines that it became obvious that FS is very common in the general population. The study in question, which was carried out in the 70s found that 57% of samples aged 20-29 and 93% of samples aged 40-49 showed signs of facet arthritis.

Today, we know that the facet joints are surrounded by a capsule containing nerve endings that are sensitive to movement and pain.

What are the Causes of Facet Syndrome

Many spinal conditions can lead to facet joint syndrome with injury and arthritis being the most common. Injury to the facet joint is usually caused by years of accumulated sprains, strains, and overuse rather than a single event.

Repetitive use of the joint can weaken and stretch out the joint’s structure and over time lead to inflammation. Older people may experience FS due to osteoarthritis which is a condition caused by wear and tear of joint tissue, mostly the cartilage. 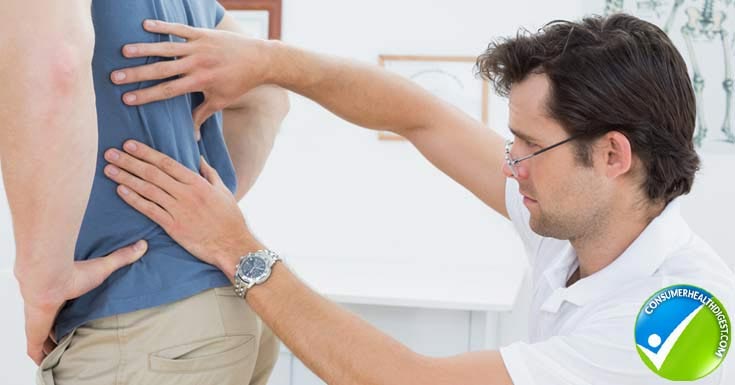 FS is mostly felt as pain in the lower back, usually on just one side. The pain can radiate towards one leg which is called sciatica.

But unlike the radiating pain caused by a herniated disc, the pain of FS mostly radiated towards the buttocks and outer portion of the thigh. This pain is also unlikely to reach the knee.

Other symptoms of facet joint syndrome include tenderness and stiffness in the lower back area, difficulty with certain movements, pain in the hip and upper outer thigh, discomfort while leaning backward and relief while leaning forward.

Diagnosing FS pain can be difficult because back pain is usually caused by more than one factor and imaging may show damage to other spine structures other than the facet joint. However, when FS is suspected, treatment involves muscle relaxants, joint pain relievers, include intra-articular steroid injections, and radiofrequency ablation.

Other treatment options include physical therapy and spinal manipulation performed by a chiropractor. A joint pain supplement could also relieve the unwanted joint pain in a jiffy.

One such joint product is ParActin which might alleviate the pain rapidly.
Read Sportscreme Review: It is intended to provide relief from minor pain caused by sore, aching muscles, stiffness and muscle strains.

The spine is our body’s most important supporting structure, helping us move and protecting our spinal cord. However, the repeated use and strains of the spine throughout one’s lifetime can lead to injury and inflammation.

The lower portion of the spine pain seems to be most susceptible to injury and pain. LBP is usually caused by a combination of disc degeneration and muscle straining but now, doctors believe that facet syndrome (FS) accounts for most cases of LBP.

Unfortunately, isolating FS as the sole cause of LBP is difficult despite advancement in medicine. Nevertheless, FS is recognized as a major cause for LBP and addressing any changes to facet joints is important when treating LBP.