What Does Thiamine Do to Your Body? It’s Benefits & Side Effects

Because it cannot be stored in the body, you must acquire this essential nutrient from your diet. Its supplementation has been used to treat heart disease, aging-related brain damage, eye problems, kidney disease, and other ailments.
Consumer Health Digest Staff

Thiamine is in a class of medications called vitamins. It helps the body convert food into energy, which is necessary for cell growth, development, and function.

Thiamine, often known as vitamin B1, is a water-soluble chemical found in a variety of foods. Despite the fact that all organisms use thiamine, it can only be manufactured by plants, bacteria, and fungi.

Older adults, people who are addicted to alcohol, people who have HIV/AIDS, diabetes, malabsorption syndrome (food absorption issues), and people who have undergone bariatric surgery (an operation that helps people lose weight by making changes to their digestive system) are all at risk for thiamine deficiency.

WHAT IS THIAMINE DEFICIENCY

Thiamine deficiency is most common when someone eats a low-calorie, low-animal-products diet (such as a vegan or vegetarian diet) or drinks too much alcohol.

For meat, thiamine is found in the liver of pork, chicken, and beef. Also, vitamin B1 is found in most dietary supplements, along with other essential minerals and nutrients.

However, cooking foods that contain thiamine vitamin lowers their thiamine content since heat destroys this vitamin. Additionally, some dietary behaviors, including drinking a lot of coffee or tea and eating a lot of raw fish and shellfish, can reduce the body’s ability to use thiamine, resulting in insufficient thiamine intake. 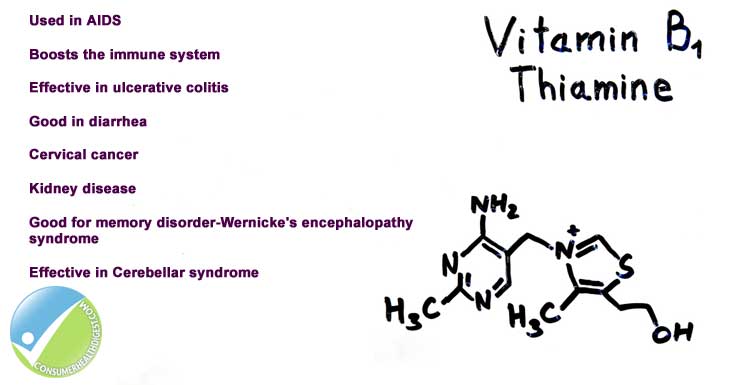 Thiamine has several possible health benefits to the body, some of which include:

Patients with ataxia, which is a movement disorder, have been found to have low levels of thiamine and pyruvate dehydrogenase malfunction. However, long-term treatment resulted in significant improvements.

Also, in the brains of people with Alzheimer’s disease, autopsy studies have revealed that thiamine-dependent enzymes have diminished activity.

Therefore the use of thiamine may help with brain health.

Vitamin B1 has the ability to increase memory retention and concentration. It’s also used to treat nerve system illnesses such as multiple sclerosis. It also improves one’s mood.

Thiamine vitamin promotes the creation of acetylcholine, a substance that ensures adequate nerve-muscle communication, which is vital for cardiac function.

Thiamine supplement, given alongside starting an antidepressant, alleviated depression symptoms faster and provided more mood stability than when the antidepressant was not used.

Thiamine supplements can be considered if you’re in a bad mood because early thiamine deficiency can cause depressive symptoms.

Taking Thiamine Vitamin B1 throughout a menstrual cycle was carried out on female students, and with two trials, significant improvement was found in the physical and mental symptoms of PMS, with no adverse effects.

Patients with fatigue who took Thiamine supplements for four weeks saw a considerable improvement in their energy levels. Thiamine vitamin has also been demonstrated to aid in the recovery of fatigue after exercise.

Vitamin B1 Thiamine is deemed safe when administered orally or intravenously by a doctor in proper dosages. However, when thiamine is taken in large doses, some people may experience allergic reactions, including skin irritation. The following are examples of possible adverse effects.

Other negative effects of thiamine are possible. If you have any unusual issues while taking this vitamin, contact your doctor.

RECOMMENDED DOSES AND TIMING FOR THIAMINE?

Thiamine dosage and timing are influenced by a number of factors, including age, gender, manner of administration, and health status.

The following are the recommended dietary dosage for thiamine vitamin B1 supplements:

Thiamine injection should only be given by a competent health care professional to treat and prevent alcohol withdrawal symptoms.

USE OF THIAMINE IN SUPPLEMENTS

Because of the numerous health benefits linked with thiamine, it is rapidly being used in many nutritional supplements. For some people, getting the appropriate thiamine dosages from regular foods can be problematic.

Fortunately, supplement makers have developed unique formulas that include thiamine as a critical element to aid customers in combating deficits.

Note: Thiamine supplements should not be used to replace prescription drugs or without your doctor’s permission.

At this time, no thiamine interactions have been recorded. It’s essential to check with your doctor or a skilled medical practitioner to see if taking thiamine plus other drugs is safe.
Some drugs may harm the ability of your body to absorb and use thiamine. If you’re pregnant, breastfeeding, or taking prescription or over-the-counter medications, avoid taking too much thiamine or any other supplement without consulting with your doctor.

Q: WHAT DOES THIAMINE DO TO YOUR BODY

A: Thiamine, like the other B vitamins, aids in the usage of food energy and is essential for cellular processes. High thiamine foods aid the body’s conversion of carbohydrates to energy, which is crucial for metabolism, focus, and general strength. It is also necessary for healthy skin, eyes, hair, nails, and liver function.

A: Thiamin deficiency can be caused by:

Q: WHAT IS THIAMINE USED FOR?

A: Thiamine deficiency can be treated or prevented using thiamine. Also, maple syrup urine illness and congenital lactic acidosis are two rare disorders for which thiamine is sometimes used to treat children.

Q: WHAT FOOD HAVE THIAMINE?

A: Beef, pork, nuts, seeds, and yeast all contain the vitamin. Oranges, beans, cauliflower, kale, and peas are some fruits and vegetables that contain this vitamin.

Vitamin B1 is commonly found in foods such as bread, pasta, rice, and cereals.

Q: HOW MUCH IS THIAMINE A DAY?

A: The amount of thiamine you need daily is determined by your age and gender. Men over the age of 14 should take 1.2 mg of thiamine every day, while women over 18 should take 1.1 mg. Women should increase their daily consumption to 1.4 mg during pregnancy and breastfeeding.

Thiamine is a nutrient that the body needs for optimal cellular processes. Thiamine should be a key ingredient to seek for in any supplement because of its extraordinary roles in illness prevention and treatment.

Always double-check supplements that contain Thiamine and follow the manufacturer’s instructions for dosing and timing. Any negative interactions or side effects should be reported to your doctor for additional guidance.