Red Yeast Rice – Is It Worth The Hype? Learn Its Benefits, Side Effects & More

Red yeast rice is a type of rice fermented by a bacterium known as Monascus purpureus. In China, it has been used for centuries as dyes, as a food preservative, as flavorings, and in the production of rice wine.

It is a staple food for various communities living in Japan, China, and other Asian nations. In the United States, it is estimated that each person consumes an average of thirty grams of red yeast rice daily.

The Chinese people have been using red yeast for more than hundreds of years for medicinal purposes, to cure digestive problems, diarrhea, and enhance blood circulation.

Culturing rice with different strains of the yeast Monascus purpureus gives rise to red yeast rice. Some red yeast rice preparations are used in menus in Chinese cuisine, including Peking duck. Others are sold as nutritional supplements to lower cholesterol in the blood and associated lipids.

Some red yeast rice foods possess substances known as monacolins, produced by yeast. Monacolin K is chemically indistinguishable from the active substance in the popular cholesterol-lowering medicine Lovastatin, one of the medicines referred to as statins. These drugs bring down cholesterol levels in the blood by lowering liver cholesterol production.

In 2008 and 2009, the most recent years for which data are available, red yeast rice dietary supplement sales were approximately $ 20 million annually. According to the 2007 National Health Survey, which included a comprehensive survey of how 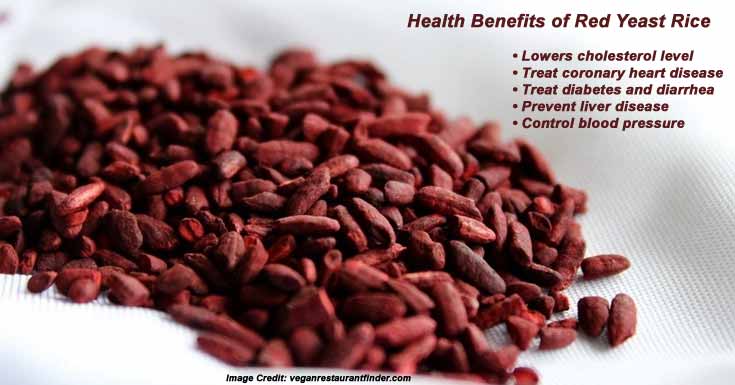 Benefits of red yeast rice include:

Heart disease is a severe disease that distresses millions of people and is projected to account for more than thirty percent of deaths worldwide. High cholesterol – a primary factor of heart conditions – causes the narrowing and hardening of the arteries, increasing the risk of stroke and heart attack.

Red yeast rice is popularly used as a remedy to lower cholesterol naturally and boost heart health. There is an expected decrease in the side effects, unlike other medications for treating high cholesterol. A review showed that when combined with statin drugs, red yeast rice is effective in lowering levels of total and LDL (bad) cholesterol and blood pressure, and triglycerides.

In addition, monacolin K can also support the improvement of the flexibility and adaptability of your blood vessels (endothelial functions), which is crucial for preserving cardiovascular health.

It Helps in The Treatment Of Metabolic Syndrome

Several pieces of research and studies have shown that red yeast rice can treat some of these conditions and factors and can also be used as a natural remedy in preventing them. Other studies have shown that a supplement containing red yeast rice could lower blood sugar, insulin levels, and systolic blood pressure in patients with metabolic syndrome.

In addition, another study examined the consequences of red yeast rice on rats fed a high-fat meal content contrasted with a control group. It was found out that red yeast rice could prevent weight gain and cholesterol.

It Can Reduce Inflammation

Inflammation is a conventional response by the immune system to protect the body from foreign invaders and acuate infections. However, prolonged inflammation is believed to lend to chronic diseases such as cancer and diabetes. Studies also show that adding red yeast rice to meals can reduce inflammation and sustain long-term health.

For example, a study of fifty people with metabolic syndrome found that taking a supplement containing red yeast rice and olive extract reduced oxidative stress levels – the main cause of chronic inflammation – by up to twenty percent for eight weeks.

Similarly, one study showed that red yeast extract in mice with kidney problems reduced the levels of particular proteins associated with inflammation in the body.

It May Have Anti-Cancer Properties

Although current research is limited to animals and trials, some evidence suggests that red yeast rice may limit cancer cells’ growth and spread.

One study found that administering red yeast powder to rats with prostate cancer significantly reduced tumor sizes. However, further research is needed to evaluate the effects of red yeast rice on other cancers in humans, particularly on the potential impact of red yeast rice on cancer patients

THE USE OF RED YEAST RICE AS A SUPPLEMENT

Modern use of red yeast rice as a dietary supplement started gaining ground in the late seventies after scientists isolated aspergillus lovastatin and monascus monacolins, respectively. Chemical analysis soon established that monacolin K and lovastatin were indistinguishable. However, while Lovastatin became the patented drug Mevacor, red yeast rice, on the other hand, has become an over-the-counter nutritional supplement in some countries.

Various strains of the Monascus fungus will produce various amounts of monacolin. A particular strain of Monascus purpureus, when appropriately fermented, will produce dry powder of red yeast rice with about 0.4% monacolin, of which about half will be K. Monacolin.

What is the recommended dosage for red yeast rice?

A: The recommended instruction to use red yeast rice is 1200mg which can be taken orally with food twice daily.

A: Red yeast rice possesses some chemicals that can be found in statins, a category of cholesterol-lowering drugs. Red yeast rice induces the same side effects statins give, such as muscle pain and damage.

What is the best time to take red yeast rice?

A: Red yeast rice is generally used to treat high blood pressure and also to lower triglyceride and cholesterol levels in people with HIV.

A: Studies have shown that red yeast rice can be used to control one’s weight. It is also a natural way to maintain cholesterol levels.

How much red yeast rice can I consume daily?

A: Most red yeast rice supplement manufacturers recommend between 1200mg to 2400mg per day for optimum results.