Pomegranate is a distinctively formed fruit that can be juiced fairly easily. The buboes inside the fruit contain antioxidants and other healthy compounds.

The fruit has cultivated its allure among those who follow developments in the health food industry. It has branched into alternative medicine as well, making it an appealing addition to the shelves of health stores.

The subtle flavor of Pomegranate has helped popularize the fruit among consumers. There are now add campaigns that promote its inclusion in mixed drinks and smoothies.

It is even a popular addition to alcoholic drinks like grenadine. This article will primarily focus on the health benefits people can expect when they try out pomegranate or its extracts.

It is a fruit crop, but the tree has an impressive appearance in itself. It is becoming widely cultivated throughout the world for its flowing plants.

The fruit itself is bulb-shaped and needs to be cut open to access the seeds inside. Typically, the fruit will be juiced before it is consumed. The seeds may be mixed in with salads or even soups in certain types of cuisines.

The juice is highly sought after for its purported health benefits. It needs to be regularly consumed for people to feel the effects take hold. Pomegranate may be sold in its pure juice form.

But it is often mixed with other juices to make a cheaper consumer product. It has a subtle flavor that may be overwhelmed if it is combined with other types of fruits. But there are new supplements that have captured some of the health benefits offered by pure pomegranate.

It was originally cultivated in the Middle East. It has stayed in this region throughout much of history, only spreading throughout the world recently. Greenhouse growing techniques have brought pomegranate plants to new regions in other countries. This has made the fruit much more accessible out on the open market.

Cultivars have been working to perfect the fruit itself. It is now more succulent and easier to juice once it has been harvested. The pomegranate fruit has a distinctive shape that gives it a unique appearance. But it needs to be carefully opened to keep the juice intact.

Traditional medicine has exhorted the pomegranate for years now. There are quite a few traditional remedies that feature the fruit as a primary ingredient. It wasn’t until recently that modern science took a critical look at how pomegranate can best be used.

Consumers should maintain a healthy level of skepticism when it comes to buying up pomegranate fruit. It is beneficial in osteoporosis, cancer, strokes, improves cholesterol level, blood pressure and prevent depression. 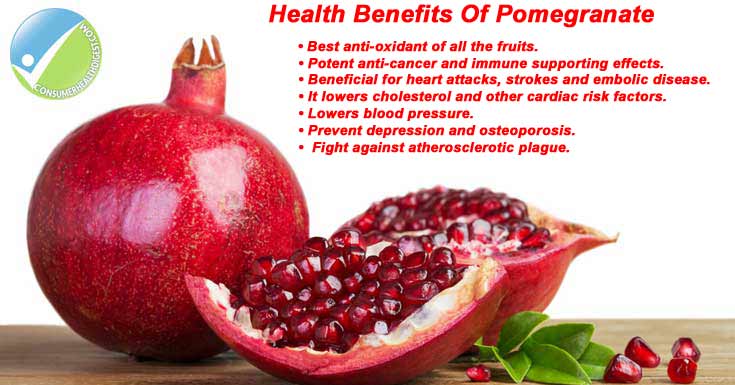 The fruit does provide a substantial amount of Vitamin C for people. Consumers are finding it more difficult to get Vitamin C into their diet. Pomegranate can form the basis for the fruit that they opt to incorporate into their health.

It also provides some dietary fiber and tannins, which may be hard to come by in some diets. Pomegranate is also well known for its polyphenol properties. This is a new topic of discussion among those in the alternative health care field. Consumers can monitor their health to see how these properties impact them in the long run.

Must Watch – Health Benefits Of Pomegranate

What are the Potential Side Effects of Pomegranate?

Pomegranate is one of the healthier juices that consumers can find on the shelves. There are relatively few side effects that can be expected from drinking the juice itself.

It will usually minimize and even eliminate free radicals from the body. This has an overall positive effect when it comes to managing one’s health. Most will find that these health benefits outweigh any potential negative side effect.

There are have been some warning letters issued by the FDA over how Pomegranate is marketed. It has a mild effect when it comes to negating illnesses and preventing diseases. But manufacturers should be cautious with how they promote these effects to the general public at large.

You May Also Like – Jojoba: Benefits, Side Effects, Dosing and More

Recommended Doses and Timing for Pomegranate?

There are basic recommendations for the serving sizes people should take. This will inform the amount of Vitamin C that consumers tend to take in as part of their health-conscious plans.

Manufacturers will provide recommendations for the amount of Pomegranate juice people should be drinking. Different ages may want to restrict the quantity of the juice that they are drinking.

Use of Pomegranate in Supplements

Supplement manufacturers are starting to include pomegranate as part of their recipes. The fruit can be dried and pulverized to produce a valuable ingredient. This compound can be included in a pill, making it easier than ever for people to gain access to these health benefits.

Consumers need to be cautious when it comes to taking pomegranate supplements. They should check the packaging to make sure that it still includes vital nutrients and resources.

The juice itself has a brilliant red color, which adds to the appeal of drinking it. Pomegranate evokes an exotic experience for consumers who want to enjoy all that it has to offer. The juice can be packaged and sold through a few different distributors out on the market.

It will be up to consumers to find those that are selling authentic pomegranate juice. This will give them the maximum health benefit that they have come to expect.