Nucific Antarctic Krill Oil is a potent nutritional supplement that helps to maintain the health of the heart, eyes, bones, brain, and joints.

Krill oil supplements are a superior substitute for fish oil supplements. It contains more antioxidants than ordinary fish oil and provides high levels of omega-3 fatty acids, including DHA and EPA. In other words, Antarctic krill derived from pristine Antarctic water is pure because it has been exposed to fewer harmful chemicals.

Antarctic krill is a supplement made by Nucific, a health and supplement company. It is rich in Omega-3 fatty acids, which are essential for a healthy heart, brain, bones, joints, and eyes. It’s exactly what you need to stay younger!

Continue reading to know what separates Antarctic krill from other krill oil supplements.

How Does Antarctic krill Work?

Antarctic krill is an essential part of the long-term eye, brain, joints, and heart health since it works to minimize common types of oxidative stress in the body.

Krill Oil
Krill oil is quickly becoming popular as a fish oil substitute. It is high in omega-3 fatty acids, which can only be obtained through food or supplements. Omega-3 fatty acids provide energy to your body and play a role in the blood vessels, heart, lungs, endocrine system, and immune system.

According to a research study, supplementing with fatty acids reduces cardiovascular risks. It is also stated that Krill oil’s omega-3 lipids may be easier to absorb than fish oil’s, but further research is needed.

Phospholipids
When this ingredient is included in diets, it provides various health benefits. The phospholipids present in this high-quality Krill Oil supplement support the health system by producing enough cell membranes in the body.

According to a study, phospholipids have beneficial effects on various body ailments such as inflammation, coronary heart disease, and cancer.

Phospholipids help keep cholesterol levels in the normal range by supporting and regulating them. According to studies, it is also an effective ingredient that helps women cope with the monthly cycle.

Astaxanthin
Antarctic krill has a powerful antioxidant called Astaxanthin. The red hue of krill oil is due to this ingredient. According to research, Astaxanthin is a fat-soluble vitamin.

It possesses anti-inflammatory, antioxidant, anti-cancer, immune-stimulating properties, and neuron-cardiovascular protection properties. Astaxanthin, as an antioxidant, can help battle chronic inflammation and the oxidative stress that it causes.

EPA and DHA
DHA and EPA are well-known for their heart-healthy effects. They can enhance your overall heart health by boosting HDL or “good” cholesterol, lowering blood pressure, lowering triglycerides, and preventing blood clotting.

EPA aids in the treatment of a variety of chronic illnesses. According to various studies, the EPA is said to be beneficial for people with chronic conditions, including arthritis, coronary heart disease, depression, and dementia.

On the other hand, DHA is known to be crucial for brain growth, development, and function. DHA in the diet increases a child’s learning abilities and helps adults maintain normal brain function. The brain more readily absorbs DHA than other fatty acids.

Pros and Cons of Antarctic Krill

How Does Antarctic krill Rate?

Here are some customers’ reviews on Antarctic krill

“This is the only fish oil with no negative side effects.” It’s simple to take, and my body seems to absorb it nicely. My thinking is sharp, and my head is clear. I am an elderly woman whose memory has improved, and I am missing fewer words than before I began using this supplement…..”

“Your Krill is a high-quality product with many health advantages. Because they represent distinct forms of Omega 3s, I use them with flaxseed oil. There are several low-quality krill supplements on the market. Yours is quite solid.”

“I used to get an upset stomach from using fish oil pills, but that is no longer the case!” Nucific’s krill oil has no nasty aftertaste, my joints feel better, and I notice a difference when I don’t take it. This product comes highly recommended from me.”

A: There is a return policy for Antarctic krill. If you need to return the product after it has been delivered, you have 90 days from the date of purchase to do so.

A: The supplement is said to be safe and does not produce any side effects. It is advised that people allergic to shellfish consult with their doctor before using this supplement.

Q: How Should You Take Antarctic Krill?

A: Take two soft gels twice a day. One each in the morning and evening. It should be consumed with food.

Q: Where to Buy Antarctic Krill?

A: Nucific’s official website is the only place to buy the product.

Q: Do I need a prescription for Antarctic Krill?

A: Antarctic krill supplementation can be purchased without a prescription.

A: Yes, pregnant women can take the supplement since it contains omega-3 fatty acids, which can aid in the fetus’s brain development. However, pregnant women should contact their doctors before taking Antarctic krill.

Q: Who is the best candidate for Antarctic Krill?

A: Adults and the elderly who need their diets supplemented for stronger joints, hearts, immune system strengthening, and other health benefits would benefit from the Antarctic krill supplement.

Antarctic krill is a very potent supplement that can provide you with health benefits. Due to its increased absorbability and antioxidant characteristics, it is safe to say that Antarctic krill is worth trying out!

Remember that if you have a shellfish allergy, you should avoid using this product. 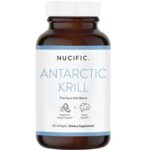