Learn about Miralax --- Mechanism of Action, Ingredients, Side Effects, Precautions, Comparison to other Laxatives.

Miralax is an osmotic laxative used in the prevention and treatment of constipation. Miralax was approved by the FDA as a safe and effective over-the-counter (OTC) laxative in 1999 for all ages (US Food and Drug Administration, 2001). Miralax is also available as an
OTC drug by its generic name, polyethylene glycol 3350. 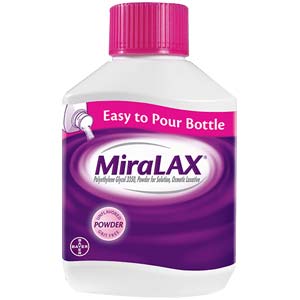 How Does Miralax Work?

Miralax works by way of osmosis, a term that means water movement from one membrane to another. When Miralax is ingested, it stimulates the GI tract to retain water. This extra water in the large intestines helps relieve constipation by making stools softer. The softer the stool, the more easily it can be evacuated.

How Will Miralax Help Me?

Constipation can be uncomfortable and sometimes painful. Excess stool in the colon and intestines puts pressure on the surrounding tissues and can interfere with everyday activities. Constipation can even contribute to anxiety and restlessness.

Sometimes, constipation can become so severe that the stool is impacted in the colon, and an enema must be used to remove the stool. This severe form of stool impaction is common in elderly people and those who use opioid narcotics. However, most people who have bowel movements throughout the week don’t have this issue but may deal with occasional, minor constipation.

If you suffer from occasional constipation, then this medication can help you regulate your bowel patterns and treat constipation.

Miralax is also used as a bowel prep for colon procedures. If you are using Miralax as a bowel prep, chances are you have specific instructions from your doctor on its use.

Long-term side effects of Miralax can be dangerous and include electrolyte imbalances and chronic laxative dependence. Miralax is only recommended to take for a short period of time until the desired effect has been reached (having a bowel movement).

The longest recommended daily dosing for Miralax is two months. If taking for 1-2 months, make sure Miralax is gradually tapered as abrupt withdrawal can cause rebound constipation (MiraLAX Dosing, 2022).

Over the last few years, some claims against Miralax have surfaced, linking it to behavioral changes and aggression in children. Although these claims are highly concerning, there is currently no evidence to support them (Helmendach, 2018).

Constipation is a very common occurrence in children, so it’s likely that pediatricians will continue to prescribe Miralax for mild constipation in children over two years old. If you are concerned about possible adverse effects, please do not use Miralax for your children. You can try more natural alternatives like prune juice and mineral oil suppositories (Borowitz, 2022).

There are some considerations when deciding whether to take Miralax:

Water intake: Since Miralax works by retaining water in the intestines, drinking a healthy amount of water while taking Miralax is a must. Try drinking two to three liters of water daily while you are taking Miralax.

Taking with other medications: Using Miralax as a bowel prep requires ingesting large amounts of Miralax in a short period of time. Make sure to take any other meds one hour before or after Miralax. There is some evidence that bowel prep with Miralax can lower absorption of simultaneously ingested medications.

Bowel Obstruction/Ulcers: If you have a history of bowel obstruction, ulcers, or other serious GI complications, Miralax is contraindicated as it can worsen symptoms and cause life-threatening emergencies such as bowel perforation.

Miralax Powder is the common form of polyethylene glycol 3350. A normal dose is 17 grams (1 cap full) and should be mixed in 8 ounces of water or preferred liquid. Follow package instructions when mixing this medication.

Q: How Long Does Miralax Take to Work?

A: Miralax can sometimes take several doses to produce a bowel movement. Since the recommendation is only 1 dose per day, this can be a rather long process. If taking Miralax more than three days without a bowel movement, you may want to try a different laxative in addition to or instead of Miralax.

Q: Can I take Miralax with my other medications?

A: There are several drug interactions with Miralax, as with many other medications. If you take prescribed medications or supplements, check with your doctor before starting ANY new over-the-counter drug or herbal supplement.

Q: Where can I buy Miralax?

A: Miralax is sold over the counter and can be prescribed from your doctor’s office. You can get Miralax at any pharmacy. You can also order Miralax online from any major grocery shopping site such as Amazon, Walmart, Instacart, etc.

Q: Are there similar products to Miralax on the market?

A: Yes. It’s important to note that cheaper generic versions of over-the-counter Polyethylene Glycol 3350 are available. Although some people prefer name brand, these generic products are FDA-approved and have the same effectiveness as Miralax.

Miralax is an FDA-approved, safe, and effective osmotic laxative for use in occasional constipation. There are some precautions to take when using Miralax such as avoiding long term use and checking for drug interactions. Always speak with your doctor if you have kidney problems, seizures, GI issues, or any other medical concerns before taking Miralax. Overall, Miralax ranks 4/5 when comparing ingredients, cost, effectiveness, and reliable reviews.

The most effective health supplements that are currently present on the market can be found below. We have taken our time and rated these products in accordance to these five essential factors: quality of active ingredients, energy boosting, hormone balance restoration, cognitive function improvement and immune system strengthening. 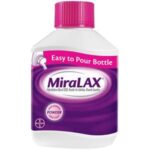