Parkinson’s Disease: What You Need To Know

What is Parkinson’s Disease?

Parkinson’s disease is a disorder of the nervous system that progresses with time.

It primarily affects the movement of a person. It develops steadily, typically beginning with a slight tremor in one hand.

Aside from causing a tremor that is the most well-known sign of the disease, it also usually causes stiffness or the slowing of movement.

During the early stages, the face may show very little, or no expression at all, and the arms may not swing when the affected individual walks.

Signs and Symptoms of Parkinson’s Disease

Here are the common symptoms of Parkinson’s disease:

In people with Parkinson’s disease, specific nerve cells or neurons in the brain steadily break down or die.

Most of the symptoms are caused by the loss of neurons that produce dopamine (chemical messengers in the brain).

With decreased levels of dopamine, brain activity becomes abnormal, which leads to the different signs of the disease.

The main cause is still unknown, but experts believe that several factors play a role like:

Tests and Diagnosis for Parkinson’s Disease

Your doctor may order lab tests, such as blood tests, to rule out other conditions that may be causing your symptoms.

A physician who has undergone training in nervous system conditions called a neurologist will make a diagnosis based on the medical history, signs, and symptoms and a physical and neurological examination of the patient.

The neurologist may also prescribe carbidopa-levodopa that is medication for Parkinson’s disease.

Considerable improvement of symptoms with intake of the medication usually confirms a diagnosis of Parkinson’s disease.

In most cases, it takes the time to get a diagnosis of Parkinson’s disease.

Treatments and Medications for Parkinson’s Disease 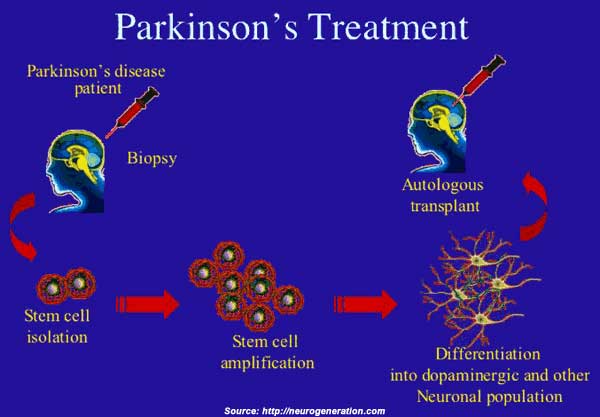 Medication can help to manage symptoms of Parkinson’s Disease. neurogeneration.com

There is still no cure for Parkinson’s disease, but medications can be used to control the different symptoms.

In cases wherein it has progressed to the later stages, surgery may be advisable.

The patient needs to make lifestyle changes that can help slow down the progress of the disease considerably.

Certain drugs can help manage problems with regards to movement and tremor.

These medications primarily work by increasing the level of dopamine in the brain.

Over time, the benefits of drugs typically decrease although the symptoms can still be controlled fairly.

The medications include the following[2]:

Must Watch Video – About Parkinson’s disease

Read Next – The Difficulties Of Living With Iron Deficiency Anemia

Electrodes are implanted by a surgeon into a part of the brain.

The electrodes are then connected to a generator implanted in the chest area that sends electrical pulses towards the brain that reduce the different symptoms.

Precaution and Self Care for Parkinson ’s disease

If a person is diagnosed with Parkinson’s disease, it is important to work closely with a physician to determine the best treatment plan that offers optimal relief from the different symptoms with the least side effects.

Lifestyle changes are essential when it comes to making a living with the disease more manageable.

Healthy eating is essential to prevent common problems like constipation.

It also helps prevent depression and anxiety that are common problems in people with Parkinson’s.

Dr. Adonis Maiquez is Miami’s leading expert on Healthy Aging and has helped hundreds of patients to feel their best as they age. Usi Read Full Bio