The Difficulties of Living with Iron Deficiency Anemia

Iron deficiency anemia is a common type of anemia — a condition in which blood lacks adequate healthy red blood cells. 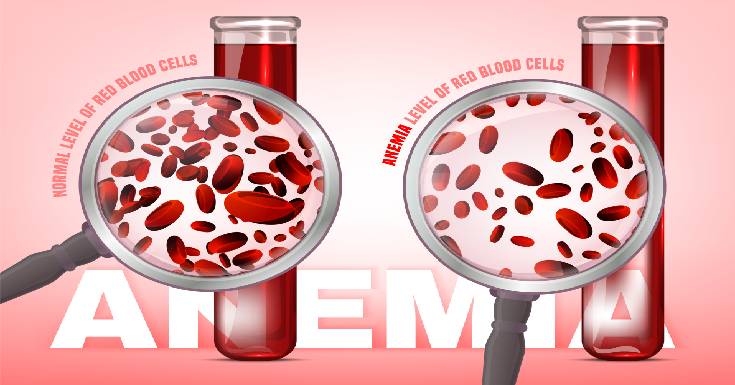 Anemia is a condition in which the body doesn’t have enough healthy red blood cells. Red blood cells help in transporting oxygen to the body tissues. As the name implies, iron deficiency anemia results from the lack of iron in the body. Iron is responsible for producing hemoglobin, the part of the red blood cell that gives blood its red color and allows for the transportation of oxygen throughout the body.

Insufficient Iron Intake
Food is the primary source of iron, and consuming too little over time can cause iron deficiency. An iron-rich diet containing eggs, meat, leafy greens, and fortified iron is vital, especially for infants, growing children, and pregnant women.

Iron Malabsorption
Intestinal disorders or surgery can affect the body’s ability to absorb dietary iron. A person with celiac disease or who has had gastric bypass surgery may suffer from an iron deficiency, even if they’re consuming adequate amounts of dietary iron.

Pregnancy
Pregnancy increases blood volume, and the iron stores of pregnant women may not be enough to produce enough hemoglobin for them and the growing fetus.

Some factors make people more susceptible to iron deficiency, including:

Individuals with iron deficiency anemia symptoms may not even know why they have such manifestations. The most common symptoms are:

Untreated iron deficiency anemia can lead to complications including:

Heart Conditions
Iron deficiency means the heart needs to pump more blood to compensate for the insufficient oxygen carried in the blood. This situation overworks the heart and can cause complications like rapid, irregular heartbeat or an enlarged heart.

A doctor will first check whether a patient’s iron deficiency is caused by insufficient iron intake or an underlying condition. Blood tests for red blood cell size and color, hemoglobin, ferritin, and hematocrit determine the iron count. The doctor may order diagnostic tests like an endoscopy, a colonoscopy, or an ultrasound to identify an underlying cause of the condition.

Iron supplements darken the stool and may cause constipation. Patients should avoid medications like antacids, as they can retard the absorption of iron.

Treating the Underlying Cause of the Disease

Taking iron tablets may not do much if there’s an underlying cause of the condition. The healthcare provider may prescribe antibiotics to treat peptic ulcers and oral contraceptives to reduce excessive bleeding from menstruation. Some patients may need a surgical procedure to remove a tumor, fibroid, or a bleeding polyp.

In severe cases of iron deficiency anemia, a patient will receive iron intravenously or blood transfusions if they are losing iron quickly.

The effects of iron deficiency anemia on an individual can be far-reaching, and it’s essential to understand and learn how to manage them if they arise. Severe cases of iron deficiency may trigger mental health conditions like depression, anxiety, and bipolar disorder. Individuals experiencing these symptoms may want to add talk therapy or psychotherapy to their treatment plan.

Symptoms of iron deficiency like pica may have social or emotional implications for sufferers. Besides trying to increase blood iron levels, patients may want to seek support from relatives and friends to help them manage the social and emotional impacts of these symptoms. The support system can also help patients perform tasks in times where they experience severe fatigue.

Patients who experience symptoms like cold hands and feet should wear warm clothing with appropriate gloves, socks, and footwear to keep warm. They should also avoid nicotine and caffeine as they constrict blood vessels and can exacerbate cold.

Iron deficiency anemia is a common but treatable ailment. People who observe symptoms of the condition should speak with a doctor at once. With proper medical care and education, patients can know more about the deficiency and how to normalize their body iron levels as quickly as possible.

Franz Gliederer (MD, MPH) is a specialist in Preventive Medicine with a Medical Doctorate from the University of Vienna, Austria and a Read Full Bio