Psoriasis Awareness Month is a public health and awareness campaign sponsored by the National Psoriasis Foundation for educating the public, raising awareness and dispelling myths about the disease. Psoriasis is a chronic, non-contagious, genetic autoimmune disease that causes red, scaly patches on the skin. It can also crack, itch and bleed. It is actually the most common among all the autoimmune diseases in the United States and it affects approximately 7.5 million people in the US.

Genetics and the immune system of a person play a vital role in the development of the disease. In those with psoriasis, the immune system sends abnormal signals that significantly accelerate the growth process of the skin cells. A person needs to have a combination of certain genes that cause psoriasis along with exposure to external triggers like skin injury, stress, smoking and infections. There is still no cure for psoriasis but a variety of treatment options are available. It is important to take note that treatment is individualized depending on the type of psoriasis, its severity and how the person reacts to certain treatments.

The main goal of the public health and awareness campaign is to raise awareness, encourage research and advocate for better care for individuals who have psoriasis. It is also for educating the public about the disease and dispelling myths about it. Here are some myths and facts about psoriasis: 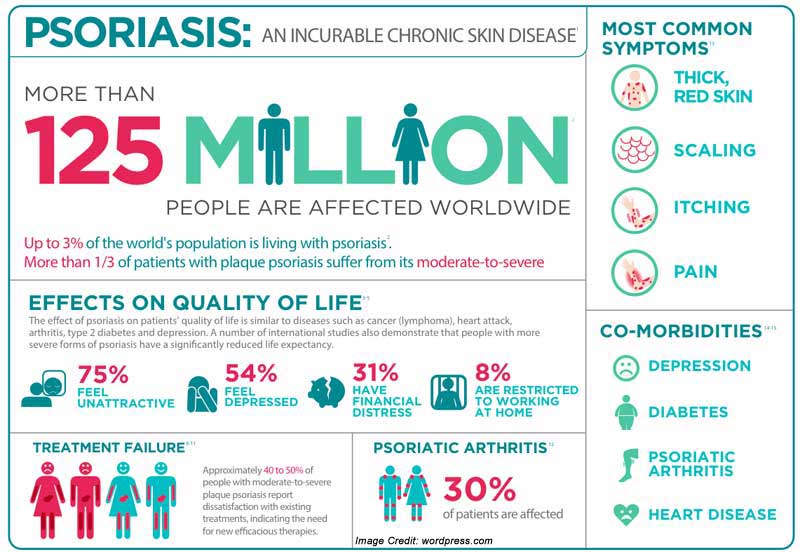 Myth: Psoriasis is a contagious disease
Fact: Psoriasis is an autoimmune disease which affects the skin. The patches (plaques) that can crack and bleed causes people to think they can catch it. However, this is not true according to Bruce Bebo, MD who is the director of research for the National Psoriasis Foundation.

Myth: Psoriasis is a result of poor hygiene
Fact: Although psoriasis appears on the skin, it is an immune system disease that is not caused or worsened by poor personal hygiene. People with the disease have a genetic tendency to develop it. There are certain things that can trigger flare-ups including skin injury, stress, hormonal changes, infection and medications. Most people with the disease experience cycles of clear skin and outbreaks.

Myth: Psoriasis is nothing more than a cosmetic condition
Fact: Psoriasis is a serious and chronic autoimmune disease that still doesn’t have a cure. The symptoms emerge on the skin which causes discomfort and psychological problems in some individuals. It can also cause intense itching and pain. Also, up to 30% of patients may develop psoriatic arthritis.

Myth: Psoriasis is very easy to diagnose
Fact: The truth is that there are many people with psoriasis who don’t even know they have it. Skin rashes are not uncommon so doctors need to rule out a list of other possible causes like allergy to food/medication and viruses. Careful visual inspection is needed for diagnosing psoriasis but sometimes there is need for a skin biopsy.

What you can do on Psoriasis Awareness Month?

Psoriasis is the most prevalent autoimmune disease in the United States. It affects up to 7.5 million Americans. It is a disease that needs to be taken seriously. Fortunately, there are many ways to control the symptoms and minimize occurrence of flare-ups.

We all need to work together to improve awareness about psoriasis. Unfortunately, there are many misconceptions about the disease like that it is contagious. This month, we need to put the spotlight on the disease and help educate the public about it. Everyone can help and even a simply post or tweet about Psoriasis Awareness Month can help.