National Glaucoma Awareness Month is a public health and awareness campaign for spreading the word about the common sight-stealing disease. It is generally for raising awareness of glaucoma which includes vital information about the common condition. There are over 3 million people in the United States who have the condition and it is projected to increase by more than 50% by the year 2030 according to the National Eye Institute.

The problem with glaucoma is that it doesn’t present symptoms and once vision is lost, the condition is already permanent. Experts say that as much as 40% of vision can already be lost without the person noticing anything. Glaucoma is actually the number 1 cause of preventable blindness. It is more prevalent among African Americans and Latinos. In fact, it is about 6 to 8 times more common in African Americans as compared to Caucasians. More than 3 million Americans and more than 60 million people worldwide have the condition. Experts estimate that about 50% of these people who have glaucoma are not even aware of it.

The main reason for creating National Glaucoma Awareness Month is to raise awareness of the condition. It advocates the early detection of glaucoma in order to treat the condition early and prevent complete vision loss. It informs the public of the symptoms of glaucoma along with other vital information about the common condition.

The public health and awareness campaign is for educating the public about glaucoma which is a group of eye disease that gradually cause vision loss. The most common forms mostly affect older individuals but glaucoma can affect anyone regardless of age. The vision loss is due to damage to the optic nerve which acts like a series of electric cables that carry images from the eye towards the brain.

What is alarming is the fact that there is still no cure for glaucoma. However, proper treatment which can include medication and surgery can slow down or completely stop vision loss. The appropriate treatment differs from one case to another taking into consideration the type of glaucoma and its severity. Early detection is the key to stopping the progress of glaucoma.

What You can do on National Glaucoma Awareness Month? 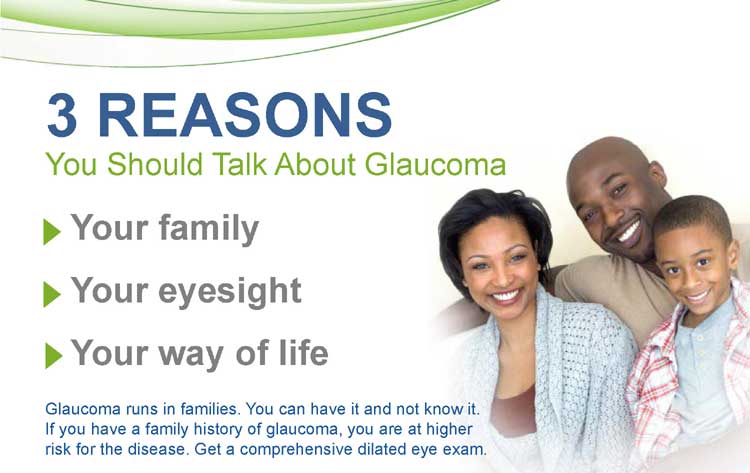 Glaucoma is the leading cause of preventable blindness. Early detection is crucial in order to prevent complete vision loss or further loss of vision. This is why it is important to spread information about the signs and symptoms of glaucoma. During the whole month of January, we should all work together to spread glaucoma awareness. After all, this may help prevent blindness in some individuals who are not aware that that they have glaucoma.

There is still no cure for glaucoma but the next best thing is detecting it early and halting its progress. With timely treatment and/or surgery, vision loss can be stopped and blindness can be prevented. The problem is that most people are not even aware that they have glaucoma. This is why it is very important to get regular eye examinations especially if you are an at risk individual due to age, ethnicity or other factors.