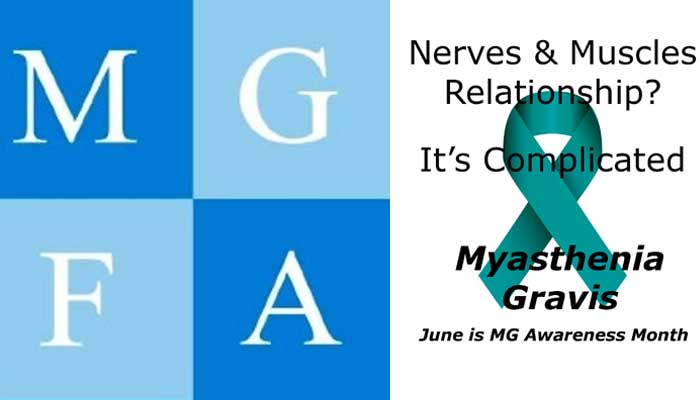 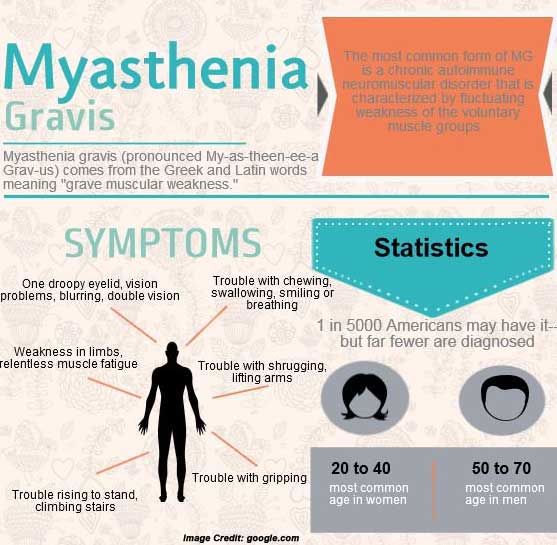 Myasthenia Gravis cannot be inherited although mothers with a history of the condition may pass it to their newborns, though rarely. But with proper and immediate treatment, children usually recover within two months from birth.

MG treatment is individualized depending on the symptoms. Treatments options include:

The purpose of Myasthenia Gravis Awareness Month is to inform the general public about the seriousness of MG and raise funds to help people living with the condition. The money raised is used fund researches and develop educational materials and programs. The FGMA conducts several programs and conferences annually with the hope of fulfilling their mission to provide information and support to people with myasthenia gravis through research, education, community programs, and advocacy. According to the Myasthenia Gravis Foundation of America (MGFA), symptoms of MG start to appear between the ages of 20 and 30 in females and between 50 and 60 in males. MG awareness month also targets increasing treatment availability to all people living with the condition across the world. In addition, it aims to make public different forms of MG and their negative effects to the affected people as well as friends, co-workers, family, and others.

What You Can Do On Myasthenia Gravis Awareness Month

There is a lot to be done on Myasthenia Gravis Awareness Month including:

Myasthenia Gravis is a serious health problem many people are not aware of. It causes weaknesses in different muscle groups and can be fatal without special care. It is during this Myasthenia Gravis Awareness Month that you should take the opportunity to share vital information about MG and give total support to people living with the condition as well as those close to them, such as spouses, co-workers, family, close friends, and neighbors.

Your participation in any way to spread awareness about Myasthenia Gravis will go a long way in helping those who are afflicted. Myasthenia Gravis is usually characterized by voluntary muscle weakness. Make donations, arrange events, and use your social networks to create awareness about MG. Beware that irrespective of your age, gender or race, you can suffer from MG. In severe cases, MG can lead to breathing difficulties if diaphragm and chest muscles are affected, prompting the need to use a ventilator until your muscle strength returns after proper treatment. Take every precaution and medication as directed by your doctor to avoid MG crisis, and seek immediate medical intervention if it occurs.