The research on the role of food in the development of diseases is fairly new. Certain populations seem to live longer than others and scientists believed diet is to blame. Considering Okinawans have one of the highest numbers of centenarians in the world, it should be natural to assume that their traditional diet has something to do with this. The typical Okinawa diet is low in calories but nutritionally quite dense which might explain the low incidence of heart disease in the Okinawa population.

The diet is also quite similar to other heart-healthy diets such as the Mediterranean diet and DASH diet making it a good option for anyone with the ambition of living past a 100 years. If you want to learn more about this healthy longevity diet, then keep reading.

People from the Okinawa archipelago in Japan are well known for their impressive longevity. The Okinawa islanders have the highest number of centenarians in the word and scientists believe their traditional diet is the secret behind this. The life expectancy of Okinawa women aged 65 in 2005 was 24.86 years and 19.16 years for Okinawan men of the same age. However, this observation is limited to generations of Okinawans born before World War II.

According to current research, younger generations are losing this longevity advantage due to the increasingly Westernized diet on the islands. There are more and more fast-food restaurants on the Okinawa islands attracting the younger population of these islands.

Adult Okinawans experienced a decrease in the popularity of their traditionally calorie-restricted diet which might explain the Islander’s gradual rise in cardiovascular disease cases. 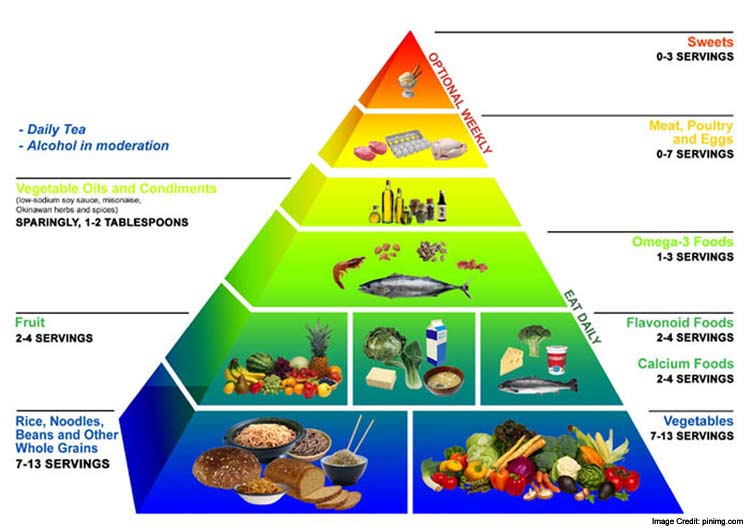 What Makes this Diet Stand Out?

Traditional Japanese diets are similar to that of the Okinawa islands. These diets include a higher intake of soybean products, fish, seaweed, vegetables, fruits, and green tea. The traditional Japanese diets are also fairly low in red meat and poultry. The Okinawa diet is different in that the emphasis is on orange and yellow root vegetables with red potato being a staple of the Island’s cuisine.

The Okinawa diet is also rich in green leafy vegetables, seaweed, tofu, and herbs which means that the diet is rich in antioxidants while simultaneously being low in calories. Okinawans also eat less rice than people in other Japanese regions.

Okinawa islands also have a unique approach to food that was shaped by their cultural heritage. The Okinawa cuisine shows strong Chinese influences as well as Japanese style of food presentation. Unlike traditional Japanese cuisine which is largely vegetable-based with fish being the primary source of animal protein, the Okinawa cuisine has included pork as its staple. Every part of pork is eaten, including the blood, skin, and internal organs.

Although pork meat is generally considered to be unhealthy in Western countries, this is not the case in Okinawa. According to an article published in the Asia Pacific Journal of Clinical Nutrition, the large amount of collagen and elastin in Okinawa pork dishes offer a wide range of health benefits.

Okinawans also tend to remove a great portion of fat content from the pork in the preparation of certain traditional dishes leaving the meal with little to no saturated fat. Besides this, pork was eaten on special occasions while the daily diet usually consisted of vegetables and tofu. 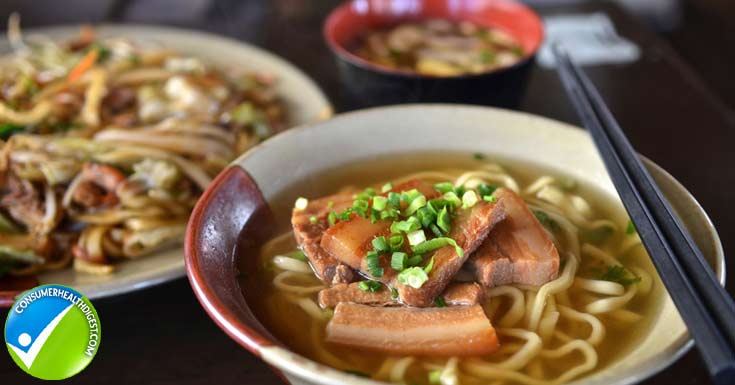 Sweet Potato as an Okinawa staple

The high intake of Satsuma sweet potato in comparison to rice also shows that the traditional Okinawa diet is rich in fiber, vitamins, minerals, and antioxidants that are present in the sweet potato. This feature of the Satsuma potato provides anti-inflammatory and cancer-fighting properties.

Furthermore, the sweet potato is a rich source of vitamin C which is a powerful antioxidant lacking in the typical Western diet and that has the ability to ward off many diseases. Furthermore, the large amounts of seaweed consumed in a traditional Okinawa diet mean the islanders eat sulfur-containing amino acids offering hear-protective benefits.

The Okinawa diet is similar in its nutritional composition to other cardio-protective diets such as the Mediterranean and DASH diet. This means that this type of diet is mostly vegetable-based with animal protein eaten moderately.

The staple foods of the Okinawa diet are the Satsuma sweet potato, Okinawa tofu, seaweed, and pork. Okinawans also traditionally consumed fewer calories than the rest of the population making this a great option for people wanting to lose weight while maintaining overall good health.