Get Fruits & Veggies Rid Of Toxins With Natural Food Cleansers

The most important part of a well-balanced diet is a consumption of fruits and vegetables. Produce is abundant in antioxidants, vitamins, minerals, fiber, and many other nutrients that are necessary for our health and wellbeing.

In an ideal world, you could just buy an apple or salad and eat, rinse them with a little bit of water and eat immediately. However, pesticides and other toxins are widely used today and water, simply, doesn’t do the trick.

So, what can you do? What most people don’t know is that it’s possible to wash off toxins with the help from natural food cleansers. In this article, you’ll see how to easily get toxic-free fruits and veggies.

Harms of Toxins in Produce

Pesticides are used to control insects and pests on crops and produce. Farmers and agriculture workers use these chemicals to save their produce, but they can have negative effects on one’s health. For example, one of the most immediate effects of pesticides and other toxins on children is the inability to get all important nutrients that fruits and vegetables provide to their developing bodies.

Let’s not neglect the fact that pregnant women who consume produce with pesticide residue expose their unborn babies to harmful chemicals as well. Pesticides also act as neurotoxins which can make a person feel dizzy, lightheaded, confused, and reduce body coordination and ability to think in the short-run.

A study from China published in the journal PloS One found that pesticide exposure adversely affects our blood cells, liver, and the peripheral nervous system. Shockingly, pesticides can also contribute to infertility in men.

Scientists from Harvard T.H. Chan School of Public Health discovered that men who consumed fruits and vegetables with higher levels of pesticide residues had a lower sperm count and a lower percentage of normal sperm than participants who ate produce with lower residue levels.

A meta-analysis of 21 studies carried out by scientists from London showed that pesticide residues intake is linked to diabetes. Theyfound that exposure to any type of pesticide was strongly associated with a higher risk of any type of diabetes by 61%.

The Environmental Working Group (EWG) published a Dirty Dozen list containing 12 fruits and vegetables with the highest pesticide residue content. They are:

Getting Rid of Toxins

Of course, it is possible to buy organic produce nowadays. However, organic fruits and vegetables tend to be more expensive and not everyone can afford them. Plus, sometimes it can be difficult to find some fruits and veggies among organic food section.

Since you need vitamins, minerals, and other nutrients you can get from the produce, you can simply use natural cleansers that will eliminate toxins. Here are a few examples. 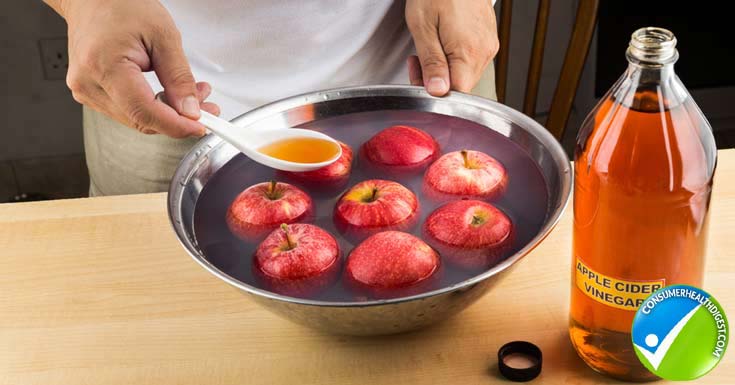 Vinegar Water Mixture
All you have to do is to take 1 cup of water with ½ cup of white distilled vinegar. Mix them together in a bowl and submerge fruits or vegetables you bought previously. Soak and scrub produce for at least 30 seconds, and then rinse under tap water for 10-15 seconds.

Lemon Spray
Mix 2 tablespoons of baking soda with 1 tablespoon of lemon and add 1 cup of water. Pour the mixture into the spray bottle and just spritz the liquid on fruits and vegetables, let sit for 5-10 minutes and rinse with water.

Lemon Vinegar Wash
To make this natural cleanser you have to combine 1 tablespoon of lemon juice and 2 tablespoons of white vinegar and add 1 cup of water. You can wash produce in a bowl using this mixture or you can pour it in a spray bottle.

Cleanser for Waxy Produce
Combine 1 cup of water, ½ cup vinegar, and 1 tablespoon of baking soda followed by a dash of grapefruit seed extract. Spray the mixture on produce and leave for an hour before rinsing with water.

Activated Charcoal
Make a solution of activated charcoal, lemon juice, bicarbonate of soda, and food grade hydrogen peroxidation. Wash produce with this mixture and then rinse with water.

Also Read – The Splendid Use Of Raw And Natural Honey

Pesticide residue on fruits and vegetables can cause various health problems. In cases when you can’t afford organic food or you have trouble finding some particular fruit/veggie with an organic stamp, then using natural cleansers to eliminate toxins is a great idea. That way, pesticides won’t prevent you from obtaining much-needed nutrients.