Turmeric has been touted the miracle anti-inflammatory plant for years, and has regained popularity in recent years for the numerous new research studies that have shed light on its healing properties. We will shed light on what turmeric is all about, possible health benefits, and information about supplementation.

Turmeric is a rhizomatous herbaceous perennial plant which is a fancy way to say that it is an underground stem like a root similar to ginger. In fact, turmeric is in the same family as ginger.

Turmeric is traditionally dried and ground into a spice. It is the spice that gives food a vibrant yellow hue, and often used in curries. The prevalence of turmeric in Indian curries gives us speculation why it is that the India has some of the lowest rates of Alzheimer’s.

You may have heard about curcumin which is the natural chemical compound found in turmeric. Curcumin is part of what gives turmeric it’s healing properties. However, it is important to note that curcumin isolated by itself is likely not as powerful as consuming the entire turmeric plant.

Curcumin, the active chemical compound in turmeric, works by inhibiting many molecules that contribute to the inflammatory process in the body. Curcumin and turmeric have been researched in a handful of human trials and are generally thought to be safe to consume even at higher levels (speak with your doctor before beginning a new supplementation regime) [1]. 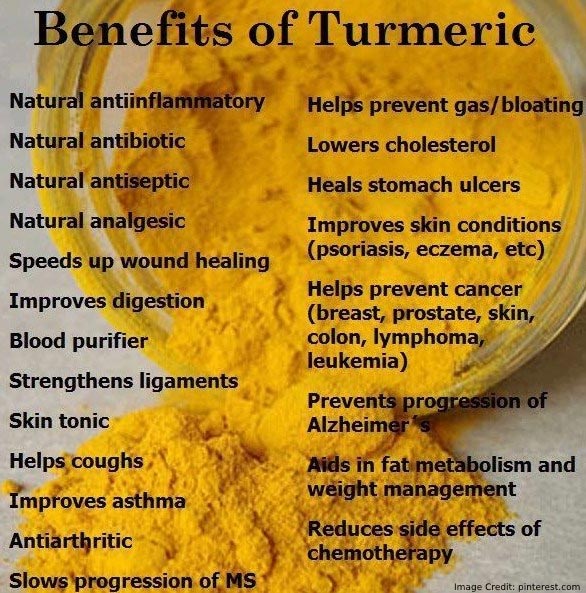 1. Alzheimer’s Prevention: Curcumin inhibits the formation of plaques, lowers cholesterol, and much more. The reduction in plaques is key mechanism of action [1]. The problem with turmeric for Alzheimer’s is that it is not a bioavailable as we would like. If bioavailability can be improved in supplement or medicinal form, then hope for Alzheimer’s prevention is out there.

2. Heart Health: As mentioned, curcumin can decrease cholesterol, prevent atherosclerosis, may prevent arrhythmia, and may improve cases of heart failure. One mechanism of action is by inhibiting platelet aggregation [3]. 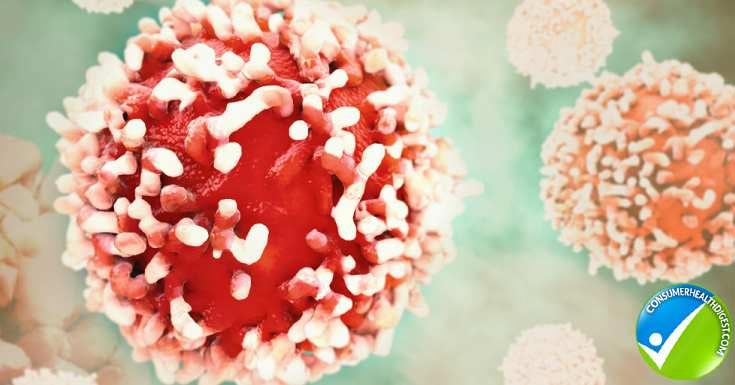 5. Pain Reduction: Some turmeric supplements are marketed as pain relievers. There is not a great deal of evidence to support the claim for turmeric as a pain reliever. However, many patient stories seem to say it is effective for those aches and pains.

6. Autoimmune Health: Not only is turmeric anti-inflammatory, but it can help balance out the Th1 and Th2 part of the immune system [6]. Curcumin plays a role in preventing intestinal permeability as well. Intestinal health lays the foundation for the immune system. If intestinal health can be improved with turmeric, the plant shows promise for autoimmune health improvements as well.

7. Reduction in Gastric Ulcers: Research has shown a reduction in pain and some have had complete healing of gastritis, gastric ulcers, and dyspepsia [7].

This is not a complete list of all the possible health benefits of turmeric, but it is the list of benefits that show the most promise from what research says so far. 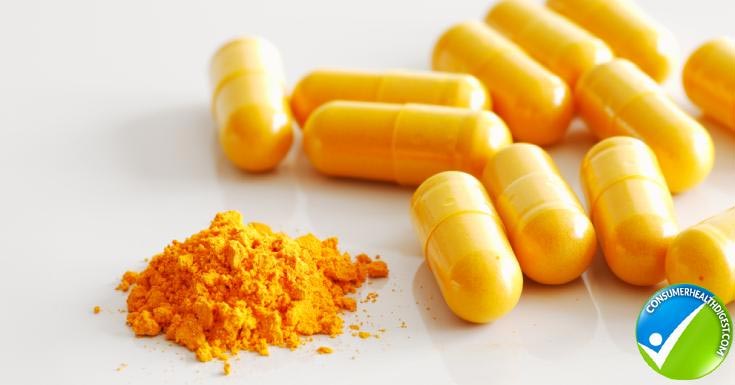 Please speak with your doctor before beginning a new supplementation regime. This article is not to be used for medical nutrition therapy or self-treatment.

As mentioned before, curcumin is not as bioavailable as we would like. What this means is that supplementation with curcumin is tricky, and it can be hard for the body to absorb. You want to make sure you are choosing a supplement that contains the most absorbable form of curcumin.

More absorbable forms are ones that may be formulated with some phosphatidylcholine [8], or black pepper [9]. You may also see the name, piperine, listed on turmeric or curcumin supplements. This is the chemical compound in black pepper that is responsible for helping to improve curcumin’s bioavailability.

Curries are often a popular way to incorporate the dried ground turmeric into a recipe. However, I enjoy sprinkling turmeric on any dinner I am cooking to add in some anti-inflammatory benefits.

A fun idea is to make a turmeric latte! Simply add your milk of choice (non-dairy, or whatever you prefer), a spoonful of ground turmeric, sweetener of choice (stevia, maple syrup, or honey), a pinch of ground or fresh minced ginger, and a sprinkling of cinnamon all to a blender.

Blend it up, then heat, and strain if you like (optional). Serve nice and warm like a latte! The beverage will be full of all the mentioned anti-inflammatory benefits and be deliciously warming and healing.