Everyone who’s watched the 2016 Olympics noticed that some athletes were sporting circular-shaped bruises, mostly on their backs and upper arms. These bruises are a result of cupping, a form of traditional Chinese medicine (TCM) therapy said to provide numerous health benefits, from pain relief to flu prevention. The practice involves placing cups with vacuum on a person’s skin and leaving them there for up to 15 minutes.

The suction created usually results in capillaries breaking and thus the reddish-blue marks seen on the backs of our favorite athletes, most notably Michael Phelps and Alex Naddour. Cupping, also known myofascial decompression, seems to be in vogue again but are there any studies supporting the purported benefits? Keep reading to find out more.

What Exactly is Cupping?

Cupping is a TCM practice dating back to at least 2000 years ago and that was practiced in China, ancient Egypt, and even ancient Greece. There are many different forms of cupping but all involve suction of the skin. The three of the most common types of cupping therapy practiced today are dry cupping, wet cupping, and fire cupping. Dry cupping involves placing glass cups, which range from one to three inches in diameter, on the skin and applying suction usually with a suction pump.

Wet cupping involves applying small incisions to where the cups were placed and returning the cups to draw out blood. The purpose of this practice is removing stagnant blood from the body. Lastly, fire cupping involves soaking a cotton ball in alcohol, lighting it and placing it in the empty cup to remove oxygen. The flame is then removed from the cup and the cup is placed on the skin.

Why is Cupping Done and How Does it Work? 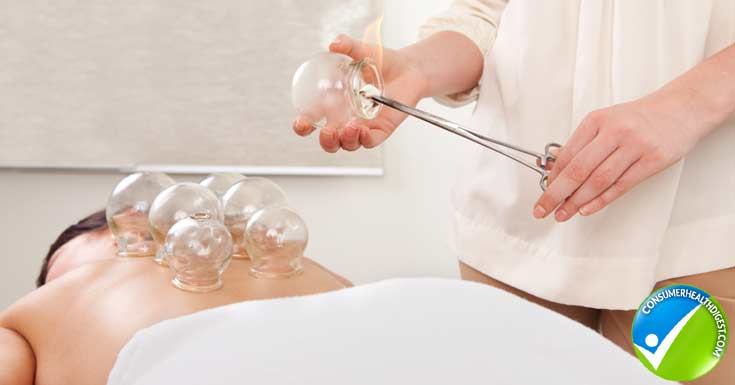 Cupping was traditionally used to treat boils, but later, other benefits of cupping were discovered and the popularity of cupping grew. Today, cupping is used mostly to treat chronic pain such as neck pain, back pain, and headaches. Other benefits of cupping are a stronger immune system and better digestion. Cupping can be done by an acupuncturist who utilizes the Chinese philosophy of meridian points and qi (life force) in healing.

An article published recently in Evidence-Based Complementary and Alternative Medicine explains that applying cups to specific meridian points were found to have a positive effect on neck pain. The same article suggests that the heat created under the cup during cupping therapy also seems to have a therapeutic effect.

Popularity and Efficiency of Cupping

Cupping is, without a doubt, a very popular alternative medicine practice, especially in Asian countries. One survey even found that up to 12% of participants reported using cupping in the past year. However, the practice has not gained the same level of popularity in the West where researchers are quite skeptical regarding the legitimacy of this practice labeling it as pseudoscience.

Right around the time of the Rio Olympics, founder and Executive Editor of Science-Based Medicine, Steven Novella, who is also an academic clinical neurologist at the Yale University School of Medicine wrote his view on this subject. In his article published in Science-Based Medicine, Novella states that studies confirming the benefits of cupping were mostly small, conducted in China, and biased as a result while larger and highest-quality studies tended to have a negative view of cupping. 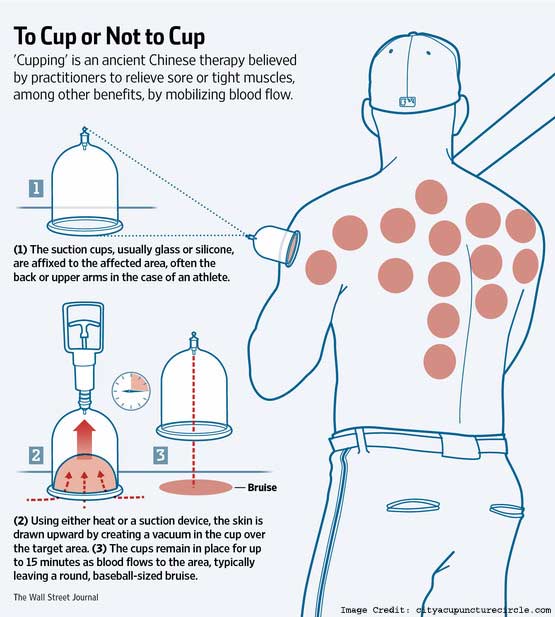 A Lack of Quality Research on Cupping

Because cupping belongs to alternative medicine, the studies on this practice are sparse and poorly conducted as already explained by Steven Novella, MD. For instance, most of these studies have similar outcomes to this one study conducted in China and published in a 2012 issue of PLoS One.

The study in question is a review-type of study involving 135 randomized controlled trials and it concluded that cupping was potentially beneficial in treating herpes zoster however that further rigorous trials need to be conducted to know for sure. In other words, most studies are inconclusive as to how and if cupping was effective.

Cupping is generally considered a safe practice, especially when done by an experienced acupuncturist. However, people with anemia, certain skin disorders, diabetes, and hypertension are advised to be cautious with cupping due to a possibility of side effects.

A case of an adverse reaction to cupping was published in Case Reports in Pediatrics and showed that cupping can cause skin ulcers in people with eczema. Because cupping involves inducing damage to the skin with the goal of providing a type of intense massage, it also poses a risk for anyone with a compromised immune system or with sensitive skin due to skin disorders.

Cupping is often frowned upon in the medical community due to a lack of objective evidence of its efficiency. But despite this, cupping therapy is still quite popular as was evident in last year’s Olympics where many athletes were seen with cupping bruises. However, since cupping is safe for most relatively healthy people, trying this form of alternative therapy may provide some benefits with a low risk of side effects.