Addiction: Getting the Diagnosis Correct

Treatment for addiction is possible but it is a complex process.
Lynn Webster, MD

Everyone has heard the phrase “opioid addiction”, but few understand what that really means. Journalists, patients, and even many doctors believe they know what addiction is, but they are often wrong.

This leads many people to be diagnosed with addiction when they do not have the disease. The consequences of a misdiagnosis can be serious because of the stigma associated with addiction.

The Stigma of Addiction

There has always been a stigma attached to people with addiction. People with an opioid addiction diagnosis ironically often have difficulty obtaining treatment for the disease because of social and even legal consequences. In addition, they may be denied access to routine healthcare, because some physicians refuse to treat people with addiction.

People with a diagnosis of addiction[1] may lose their jobs, encounter difficulty in finding employment opportunities and be denied health and life insurance.

Addiction is a Brain Disease

Addiction is a brain disease that is characterized by the 4 Cs: craving, loss of control in using the substance, compulsion to use the drug, and continued use despite harm[2].

The presence of drug-seeking behaviors and an inability to stop using a drug characterize a person who has an addiction. A simple way to know if people are addicted is this. If they cannot abstain from using a drug for an extended period of time, then they are likely addicted. 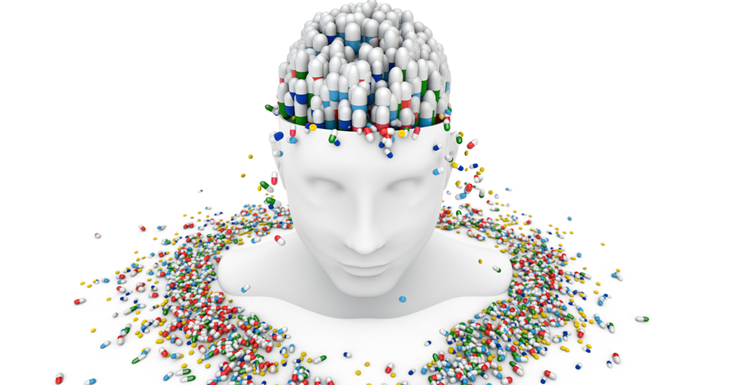 What Addiction Is Not

Addiction used to be thought of as a character defect or as a choice. It is neither.

Many people, including some physicians, assume tolerance, physical dependence, withdrawal, abuse, and misuse are just different words that can be used to describe addiction.

They may use those words interchangeably and inaccurately. These terms may be associated with addiction, but they are not necessarily the same thing as addiction—nor are they proof of addiction.

Below are definitions that are accepted by most researchers and authors in the field.

Table 1. Definitions Related to Use and Misuse of Opioid Analgesics

When people are prescribed an opioid for pain, they begin to develop a tolerance to the drug. This means that the body requires increasing amounts of the drug to produce the same effect. This is a normal biologic process that is called neuroadaptation. Most tolerance develops in the first few months of using daily opioids, and then it plateaus.

Because of tolerance, people may develop a physical dependence. When that happens, withdrawal can occur if the opioid is suddenly stopped. With a withdrawal, people experience flu-like symptoms, nausea, chills, muscle pain, twitching, diarrhea, sleeplessness, anxiety and depression.

These are normal responses when an individual has stopped using an opioid and has developed a physical dependence. They are not necessarily signs of addiction.

I once saw a middle-aged woman as a patient in my clinic who had been prescribed opioids for several months following major surgery. She was ready to discontinue her opioids, so she tapered herself to a low dose.

However, she was not able to discontinue her medication completely, because she experienced terrible withdrawal towards the end of the tapering process. Her doctor referred her to me with a diagnosis of addiction.

The doctor was mistaken. The patient wasn’t addicted. She had no craving for the opioid, and she was not using the drug to get high or to chemically cope. She was not continuing to use the drug despite harm. She was just trying to stop. That is the antithesis of addiction behavior.

She had developed a physical dependence, similar to that of babies who are born to mothers who are physically dependent on (but not necessarily addicted to) opioids[3].

Babies are never born addicted, despite what the headlines would have us believe. Their situation is sad, but it is exacerbated when they are mislabeled with a diagnosis of addiction.

Abuse occurs when an opioid is used for an unintended purpose such as getting high, or to treat mental health disorders including anxiety or PTSD. Often, people will use an opioid not to relieve pain, but because it gives them energy or makes them feel good. That would be a sign of abuse.

While abuse may not necessarily be proof of addiction, it’s an issue that needs to be addressed. Abusing opioids is dangerous, and it could lead to serious harm or even death.

Misuse takes place when someone uses a drug for a medical purpose in a way other than as directed or indicated, either intentionally or unintentionally. It may or may not result in harm. A person who takes an opioid more frequently, or in greater amounts, than it was prescribed—but for a legitimate pain problem—is misusing the drug.

Misuse is not the same thing as addiction, either. 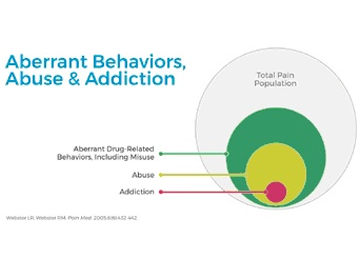 Illustrating the Complexity of Addiction

It would be so much easier for physicians and patients if addiction were an all-or-nothing disease. Unfortunately, it is far more complicated than that.

The presence of the disease is not binary; there can be degrees of opioid abuse[4]. Sometimes, there is a progression from a minor aberrant behavior to more harmful ones until, finally, a person reaches the stage of addiction. 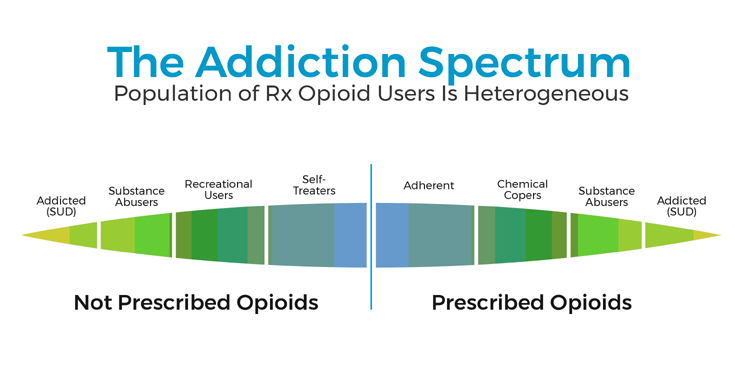 The Addiction Spectrum. Image given by author

Figure 2 shows a spectrum of opioid use behaviors. The population of users is divided into those who have, and those who have not been prescribed opioids for pain.

The illustration shows that regardless of whether the opioid is prescribed or obtained illegally—from family, friends, or the street—it is usually used to treat pain. The thickness at the center of the figure represents the proportion of people who fall within that particular behavior. Most people either are self-treaters of pain, or they are adherent to directions when prescribed opioids.

The behaviors farther from the center become more aberrant and dangerous. There are fewer individuals who use opioids for unintended purposes than those who use them for pain relief.

Chemical copers and recreational users are self-medicating a mental health disorder or simply seeking a positive emotional experience. When this happens, it is a form of abuse, but it is not necessarily addiction.

At both ends of the spectrum, there are people who may display egregious behaviors consistent with addiction. At this point, they will have met the criteria of the 4 C’s. The transition from abuse to addiction can be insidious.

Understanding the context is critical to knowing whether addiction has developed. If an individual cannot stop using because the pain becomes intolerable, that is not addiction.

On the other hand, if an individual cannot stop using because of the psychological effects, then the person has probably developed an addiction (also called an opioid use disorder).

You May Also Want To Read – Addictions – A Short Term Relief Or Long Term Problem?

Addiction Can Happen to Any of Us

No one is destined to be addicted, although a small percentage of the population is highly vulnerable. The vulnerability to developing an opioid addiction is 50 to 60 percent genetic[5]. The remaining risk is due to the environment in which a person lives. This includes the ability to handle stress, social/economic conditions, and the presence of mental health disorders.

Some people are lucky enough to be spared the addiction genes. But that does not guarantee immunity from the disease. Given a stressful or painful enough situation, most of us could find ourselves looking to drugs, including opioids, for relief.

Understanding the differences between tolerance, physical dependence, withdrawal, abuse, misuse, and addiction may help people navigate the healthcare system to find the best treatment for their condition.