For many people, taking care of their fingernails is about aesthetics. Your fingernails are noticeable most of the time, and during the summer you probably wear shoes that show off your toenails, too.

Take care of your fingernails and watch out for these 11 common nail problems:

Occurring gradually over time, nail clubbing occurs as the distal portion raises up and rounds out. As a result, the tip of the finger and the fingernail appear swollen and rounded. The bed beneath the nail may not support the nail as firmly, causing the nail to be looser and to spring almost like a sponge when pressed.

Although a bit of a misnomer, hangnails occur when the skin along the edge of the nail tears or is otherwise damaged. Sometimes this causes bleeding and can cause persistent, low-grade pain. Simply wash a hangnail and apply an antibiotic cream to protect against infection. The skin will heal itself. 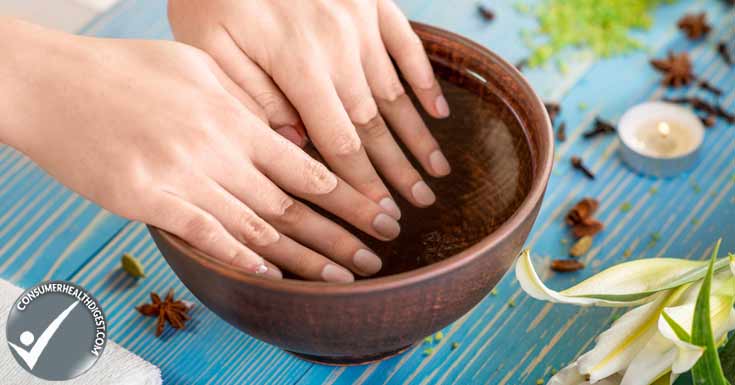 One of the most common nail problems, nail infections occur when dirt and bacteria get under the fingernail. Infections that reach the nail bed can be painful and can result in swelling or puss pockets forming near the nail.

Often nail infections can be prevented or treated at home with only minor discomfort. It is best to avoid altering the nail and to avoid attempting to remove the visual portion of the infection with clippers or other tools. The nail should simply be soaked in warm water multiple times a day. If the infection continues, see a doctor for medication.

If any of your nails split or peel, you will notice. The condition may be uncomfortable and tends to be obvious. Generally, split or peeling nails occur when the nails are too dry and brittle. This is common and if often caused in part by immersing and then drying the hands (and of course, nails) too frequently.

When the painted or polished fingernails are decorated, removed, and redecorated often it can have the same drying effect. Be gentler when cutting, washing, and painting your nails. Use gloves when immersing your hands in hot water as well. 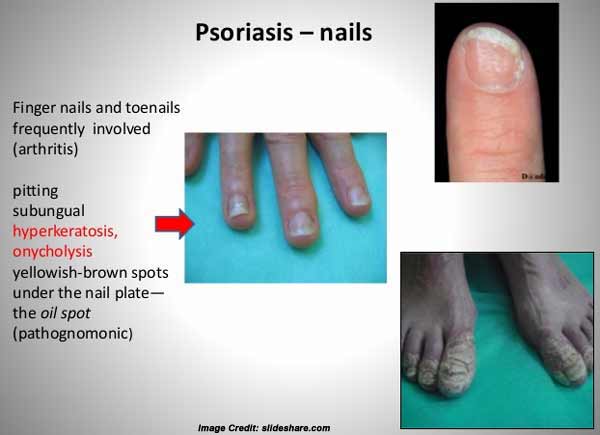 Caused by an overactive immune system, psoriasis can spill over into your nails and create changes in color, thickness, and the surface of your nails. You may notice pitting or depressions in your nails, for example.

More common in the toenails, discoloration that appears to be yellow is generally the result of an underlying medical condition. There are many treatments for yellowed nail issues since they are quite common.

Yellow nails can be caused by:

If your nails appear yellow and are also growing brittle, cracked, or dry, you should see a doctor to rule out conditions like these. Of course, your yellow nails may also be the result of a nail polish you have recently removed, in which case you should simply wash them a few times.

Named after the man who first documented them, Beau’s lines are linear depressions in the nails. They run horizontally and move up from the base of the nail as it grows outward. You can measure how long the lines have been there based off of how far up the nail they are. 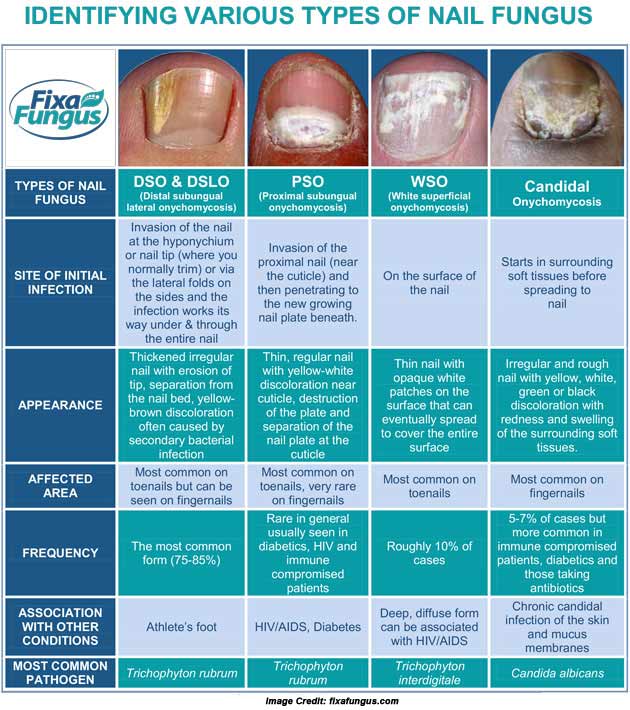 A large number of people have nail fungus at least once in their lifetime. Fungus is found and grows all over, so your hands and feet are exposed to it naturally. The trouble with fungus affecting your nails can be minimal, or it can grow to be a greater issue.

If you just have a spot or two of fungus under your nails, then all you probably need to do is wash in warm water regularly until it goes away. As your nails grow, they will likely push the fungus out anyway.

However, if the fungus appears to grow or spread, you may want to take further steps. When the fungus begins to alter traits of your nails, like their color or thickness, see a doctor to learn about your options before the infection becomes serious.

Also known as lifted nails, onycholysis is when the nail separates from the nail bed, raising itself up away from the finger. Often a painful condition lifted nails occur for a variety of reasons. Sometimes nails lift as a part of other issues, like a fungal infection or psoriasis. Often, nails lift in reaction to excessive hardening or over-exposure to chemicals (like those used in nail polishes.)

10. Half and Half Colored Nails

Nails that are colored half one color and half another are generally a sign that something related to a change in your overall health has occurred inside of the body. See a doctor, as half and half colored nails can be a sign of anemia, systematic disorders, and more.

Any discoloration of the nails is a hint that something isn’t quite right internally. Bluish nails are one of the most common color changes, though, and are often very treatable. Nails begin to appear bluish when there are issues in the blood or in the circulatory system. A doctor can usually diagnose such issues quickly and provide treatment, which then gets your nails back to normal.

You May Also Like: Menopause and Brittle Nails: Characteristics, Symptom, Remedies and More