Batman has a reputation for being a badass crimefighter. These 10 drink recipes are true to the Dark Knight’s taste, incorporating the stylish and mysterious elements we admire in him.
Bethany McIlrath, B.A

Themed drinks have a way of making parties more exciting and memorable. They are also fun for enjoying while relaxing on movie night at home.

Just try this: say “I am Batman,” in a chilly, deep voice as you throw back a classic, comic-worthy drink. Whether you’re alone at home flipping through the comic book or out with friends at a themed costume party, kicking back a Batman-themed drink just feels epic.

As you plan a menu for your Batman-themed party or purchase what you need for a themed movie night at home, be sure to include the essential ingredients for these Batman cocktails created by and for Gotham’s greatest superfans.

Created by Malicia Flore, this beverage consists of:

A stirred cocktail, this drink is classy. With a smooth, almost black appearance that has a slightly crimson tint, this drink hints at the deeply dark and sinister undertones of the Dark Knight Rises film, which is the last of the renowned Batman trilogy by Christopher Nolan. 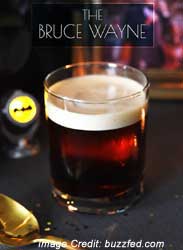 It’s only fitting that a drink honoring Batman, specifically in his role as Bruce Wayne be upper-class and harmless in appearance but tough and cunning inside. As you sip this drink, you will taste:

And then, the kick of:

Like Bruce Wayne, it will surprise and awe you.

As the hit series “Gotham” reveals, Selena Kyle, later known simply as Catwoman, has always been all sass and sly. Under her hard exterior, however, she conceals a deeply compassionate heart bent on justice.

Accordingly, these cocktail beverage bites, but then soothes as it contains:

Although it goes down swinging the beverage ultimately (and appropriately) has you wanting to come back for more. 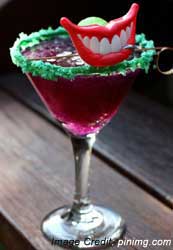 One of the most memorable characters in the Batman series, the Joker is a deeply sinister and intriguing character. Sick and twisted, the Joker is also vibrant, clever, and a little creepy. Admired as one of the best villains ever created, the Joker’s trademark colors are green and purple.

You’ll find both in this drink consisting of:

Place the lime slice on the rim of the cocktail glass for extra flair and appeal. This beverage will stand out just as the Joker does in the epic story of Gotham’s hero versus Gotham’s villains.

Get a candied kick of creative combined with power and innovation. The Mr. Freeze cocktail is chilling in its appearance and as it goes down. It’s sharp, glassy rim décor and flavor is striking and exhilarating, much like the character.

To make the cocktail, mix:

For the rim of the drink, wipe lime juice along the edge. Crush jolly ranchers and freeze the pieces, and then line them along the wet lime juice rim. This cocktail will look great and go down cold and smooth.

Dark and intimidating, this drink symbolizes the intrigue and influence of the bat cave in the epic Batman storyline. A hub for learning to combat all things dangerous and sinister, the bat cave served as a launching pad and safe haven for a hero unparalleled.

The cocktail consists of: 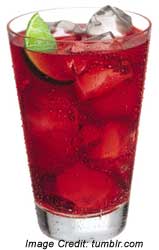 Naturally, a bat bite should sting a little bit. The beverage named the bat bite stings, too. With a tart, slightly bitter flavor and alcohol that bites the tongue and throat as it goes down, the bat bite is the kind of cocktail that hurts a little but is also delicious and thrilling.

This cocktail’s ingredients include:

Darkly colored as well, this cocktail will get you feeling like you’ve entered the bat cave, and from its darkness, plan to go combat evil. AKA, this cocktail makes you feel like a hero swallowing danger and launching himself off to fight villains.

The unsung hero of Batman (okay, yes, his praises are rung by all super fans) is Alfred. Cool, sly, and snarky, Alfred is the servant of the Wayne family and even serves as young Bruce’s mentor according to one version of the earliest part of the epic tale.

All class and back by mystery, Alfred’s drink must be appropriately cool and complex:

Who is the Batman? Or, in this case, what is the Batman? According to “the geekiest” list, this cocktail is a strong, flavorful drink that, like the epic story, is bursting with energy, power, and depth.

You’ll feel like fighting some crime yourself after enjoying this tasty and empowering beverage.

A character easily overlooked though his role is vital, Detective Gordon is influential in the story of Batman. His gruff, over-confident manner makes him a straight shooter, and that’s what this drink promotes.

The recipe is straight forward:

Mixed together, these beverages form a strong flavor that well represents the ideals and role of Detective Gordon.

Tips for Adding to the Batman Theme

To make a Batman themed party more festive or to add fun to a night to yourself binge watching the movies, try: