It is a topic most women are uncomfortable talking about, and it is also one that is not commonly researched by many health care professionals.

While it is rarely discussed, it is defined as a form of autoeroticism and is one of the most common sexual act most women engage in.

A small percentage of the women surveyed did complain of problems that included, numbness and tingling in the vagina, minor tears in the vaginal lining, and even minor cases of irritation.

While most of these cases were minor, and the problems repaired themselves over time, some women did suffer from continuing stomach cramps.

Tears and rips in the vaginal lining that could be causing the stomach pains may also indicate another condition as well.

One of the more common conditions is known as a hypoestrogenic state which occurs when a woman is breast feeding, or experiencing menopause.

Genital lichen sclerosus is another common condition that can also occur in a woman’s body and is generally caused by a change in the body’s hormonal levels.

A health care professional should be immediately consulted if either of these problems occurs.

Some of the common items women use include tapered candles and cucumbers.

Not only can this cause stomach pain, this problem can also cause severe infections and other health risks. 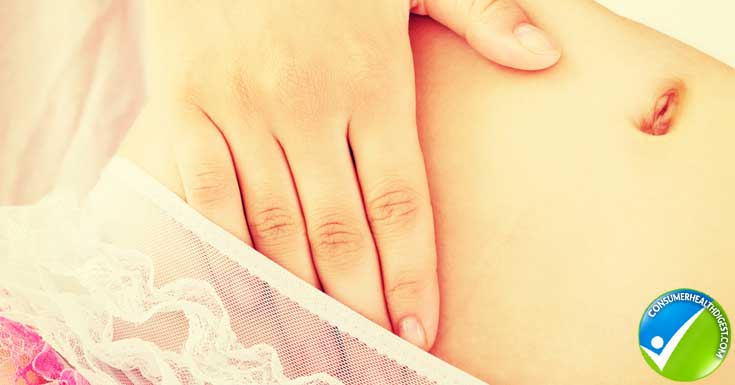 Therapists have been recommending vibrators to their female patients for years as a way to help women learn how to have an orgasm.

Not only is this a relatively private way for women to begin to understand their bodies, but it can also help to improve their relationships.

While using the fingers to stimulate the clitoris has less of a risk when it comes to vaginal rips and tears, a woman can still experience an occasional stomach pain.

Some of this can be simply attributed to the contracting and relaxing of the muscles in the cervix and uterus and the pain will disappear over time, other problems can be more complicated.

Simply by listening to their bodies, most women will be able to tell if their stomach pain is normal or part of an ongoing sexual problem.