PMS is a very common condition that affects a woman’s emotions and moods during the menstruation period. The cause of Premenstrual Syndrome is unknown, explore more about PMS condition here.

PMS is a condition that affects a woman’s mood during the menstruation period. Shutterstock Images.
Dr. Ahmed Zayed

What is Premenstrual Syndrome (PMS)?

Known as PMS, premenstrual syndrome occurs during the luteal phase of the menstrual cycle.
This is normally ten days before the start of the menstrual cycle. It may cause breast tenderness or bloat. Roughly two to ten percent of women also experience premenstrual symptoms that are different than the average female.
A severe version of the syndrome is known as Premenstrual Dysphoric Disorder (PMDD)[1]. Although many of the same symptoms occur with both conditions, PMDD typically causes more severe symptoms and worse mood swings.

Although PMS has been linked to the luteal phase, scientists do not know exactly what causes PMS. Studies of sex hormones among twins indicate that genetics may play a role[1].
New research on the topic also indicates that neurotransmitters interact with these hormones within the nervous system.
About 40 percent of women who experience PMS have a drop in beta-endorphin during the luteal stage[3]. This chemical is structurally similar to opiates and the lack of beta-endorphin can reduce withdrawal-like symptoms.
Some researchers also think that PMS is due to cultural factors. The power of the mind and the placebo effect could cause someone to suffer symptoms that they would not normally deal with.
Although cultural factors are not proven causes of PMS, it is a possibility faced by researchers.

PMS is a common phenomena in women over 30 years of age. Health24 Images

What are the Symptoms of PMS?

Medically, there are 200 different symptoms associated with premenstrual syndrome[4]. The most common symptoms are tension, sadness and irritability. Often, women may experience additional stress, anxiety or fatigue.
They may suffer from headaches, mood swings, and libido changes. Physically, women will most likely deal with bloating, breast tenderness or acne. Other physical symptoms include abdominal cramps, muscle pain, swelling, and constipation.
For these symptoms to be medically classified as a premenstrual syndrome, the emotional symptoms must be present. Physical symptoms alone are not enough to lead to a diagnosis of PMS.
In addition, the symptoms must be present one week to ten days before the start of the menstrual cycle. 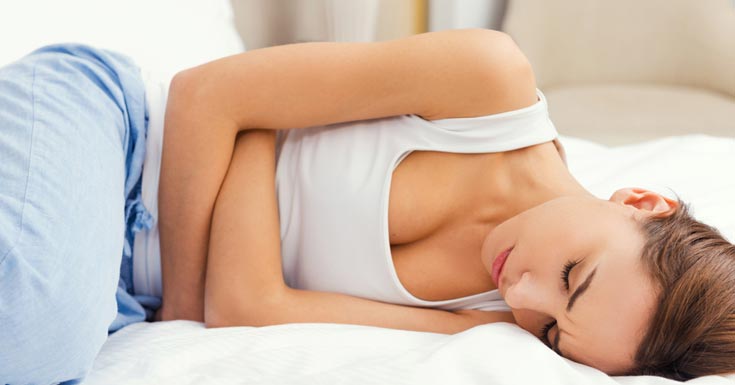 Abdominal cramp is one of the symptoms which woman face during PMS. shutterstock images

How Can Someone Prevent PMS?

To prevent premenstrual syndrome, women should lower their caffeine intake and reduce the amount of stress in their lives. As women grow older, PMS can occur more frequently.
During these times, it is important to receive enough Vitamin B6,
, Vitamin E, magnesium and zinc.
If the diet does not contain enough of these nutrients, women should try to eat healthier. Many doctors also suggest the value of exercise in preventing PMS.